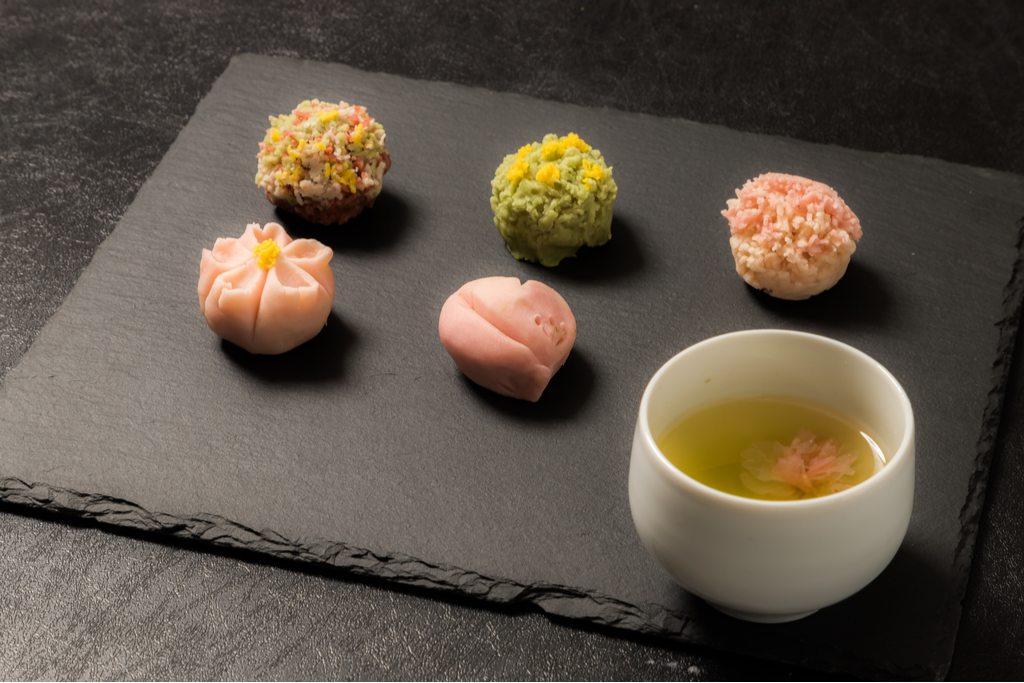 There are four distinct seasons in Japan, and their changes are reflected everywhere, including traditional snacks. Spring’s bright colors feature prominently in Japanese sweets, with cherry blossom pink particularly popular during sakura season.

Like Japanese winter sweets, spring’s unique treats mostly feature two ingredients that also happen to be auspicious symbols in Japan’s Shinto religion: rice and beans. Pounded white glutinous rice cakes called mochi, and a sweet red bean paste known as anko in fact form the basis for most traditional Japanese sweets or wagashi. All the items on this list feature one or both of these ingredients, but still manage to achieve very different tastes and textures.

The rice harvest season takes place from autumn to winter, but Japanese mochi is a popular dessert ingredient all year round. For spring it is mostly combined with seasonal herbs, leaves and cherry blossoms.

One of Japan’s five ‘seasonal festivals’, the hinamatsuri is celebrated every year on March 3rd. Also known as ‘Girls Day’ or ‘Doll’s Day’, it revolves around a display of dolls resembling members of the imperial court. Families purchase and display these auspicious dolls for the good fortune of their daughters.

The diamond shaped hishimochi is made for, and only available during this festival. Its shape is said to be a symbol of fertility, while its three colors of pink, white and green stand for vitality, purity and longevity respectively.

Literally translating to ‘dry confectionery’, higashi are a type of dry traditional Japanese sweet. usually eaten alongside a cup of green tea or Japanese matcha. The finest quality higashi are made with wasanbon, Japan’s unique fine grained sugar.

Higashi sweets are characterized by their shape, which is achieved by pressing sugar and rice flour mixed with a small amount of water into wooden molds. The fine grain of wasanbon allows for intricate detail, manifesting in seasonal motifs and symbols. In the case of spring, common symbols are cherry or plum blossoms, bamboo shoots or animals like the Japanese nightingale.

Interested in trying out seasonal flavors like sakura as part of your tea time? Sakuraco sends seasonal and regional Japanese snacks and sweets right to your door.

Perhaps the most stylish and visually striking among wagashi, nerikiri are also intended to be eaten alongside a cup of tea. The name literally translates to ‘kneading and cutting’, which is how these sweets are shaped according to each season.

With a lot of artisanal work going into these sweets, they are reserved for special occasions, celebrations or Japanese tea ceremonies. Intended to balance out the strong, bitter flavor of matcha tea, nerikiri have a mild flavor compared to some other wagashi.

As spring temperatures make plants sprout, many people head into the mountains to forage for mushrooms, vegetables, herbs and edible plants. The latter kind is responsible for the color and taste of a popular spring treat called kusamochi.

Literally translating to ‘grass rice cake’, kusamochi is characterized by a deep green color. The leaves of the yomogi plant (‘mugwort’ in English) are worked into the glutinous rice dough, which sometimes encases a center of sweet anko bean paste.

A Japanese snack made just for the cherry blossom season, sakuramochi is noticeably different from other mochi as it’s wrapped in a whole salt-pickled cherry leaf. Colored in sakura blossom pink, it comes in a variety of different regional styles, the most popular being Kanto (East Japan, including Tokyo) and Kansai (Central Japan, including Kyoto).

Round, cherry blossom wrapped Kanto style sakuramochi is most common. By using coarse, granular dough, its appearance is a bit rougher than that of smooth, regular mochi. At its center is – as usual – sweet anko bean paste.

Kansai style on the other hand contains more wheat than flour, and despite containing the word mochi, is ultimately closer to a crepe. The bean paste core is wrapped by folding over a sheet of dough and a pickled cherry leaf in the middle.

There are a lot more spring specific wagashi out there, particularly local varieties. The five featured here, however, are available anywhere in Japan if you visit at the right time.

Have you tried any of these? What was your impression? Let us know in the comments below.