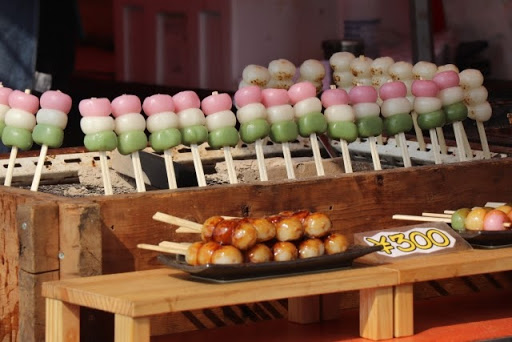 As cherry blossom season creeps ever closer, pink, spring-themed snacks are popping up in convenience stores and supermarkets all over Japan!

More than just the end of winter, the approach of spring means it’s time for the sakura cherry blossoms to start blooming, and that, in turn, means hanami. Hanami is a Japanese word meaning flower viewing, describing the traditional Japanese practice of venturing outdoors to enjoy the sight of the beautiful cherry blossoms, often with family or friends. Dating as far back as the 8th century, hanami is still widely practiced in Japan today and is a fun, approachable way to participate in Japanese culture.

While hanami might refer to as little as a quick stroll around the sakura-filled parks of Tokyo, many people take advantage of the warming weather to have one of their first picnics of the year beneath the colorful blossoms! Seasonal and themed food is an important part of Japanese culture, and hanami is no exception, with popular spring-themed treats being especially popular at these gatherings. Alongside classics such as sakura mochi, inari-zushi, and sakura onigiri, you’ll also find hanami dango, a Japanese rice dumpling dessert especially named for the occasion!

Hanami dango is a wagashi, or traditional Japanese sweet, consisting of three dumplings of sweetened rice flour colored pink, white, and green. The dumplings are typically served on a skewer, and have a sweet and mild, with a texture that is firm and chewy. While other types of dango are typically served with a topping such as kinako soybean flour, red bean paste, or a sweet soy glaze, hanami dango pairs best with the sight of the cherry trees, a full stomach of onigiri, and a flavorful green tea.

Looking for a taste of traditional Japan? Sakura.co delivers authentic Japanese snacks, tea, and wagashi straight to your door every month!

To the untrained eye, dango and mochi can often seem like the same thing. However, unlike mochi, dango is traditionally made with non-glutinous, Japanese short-grain rice flour, while mochi uses glutinous rice grains. That said, the perfect texture for dango is a matter of much debate, and many Japanese recipes suggest using different flour depending on your preferences. In particular, some argue that non-glutinous rice flour can create dango that are tough and dense instead of chewy and elastic, and so for fans of a springier dango, a combination of non-glutinous and glutinous rice flour is usually recommended, Other suggestions include incorporating silken tofu or using mochiko, a glutinous flour made by grinding the rice used for mochi. Either way, there’s plenty of room for experimentation!

The same can be said for the coloring of the dango, which can vary widely depending on personal preference and the availability of ingredients. In the past, the pink dango ball was colored using traditional ingredients like purple perilla (called red shiso in Japan) and pickled cherry blossoms. These days, however, red food coloring and strawberry powder are more popular (and convenient) solutions! The green dango, meanwhile, is traditionally colored using a Japanese mugwort called yomogi, actually making it similar to a type of dango called kusa dango. In Japanese, kusa means “grass,” and refers to the rich green color caused by the herb. Yomogi also gives the dango a mild, earthy flavor similar to kusa mochi, which also uses the ingredient. Since yomogi can be hard to find outside of Japan, many hanami dango recipes recommend using matcha powder or green food coloring as a substitute.

The Origins and Symbolism Behind Dango

At this point, you might be wondering about the origins and symbolism of the pink, white, and green dango balls. In fact, there are a number of competing theories on the subject. The first suggests that the balls are intended to represent the lifecycle of the cherry blossom, which moves from pink buds, to blooming white, to green leaves. The second theory relates the treat more generally to the arrival of spring, as pink cherry blossoms and green grass slowly begin to replace the white snow from the past winter. Whatever the reason, there can be no doubt that the vibrant, auspicious coloring of hanami dango plays a huge part of its appeal. Although eaten year round, during the cherry blossom season, you can even buy it freshly made from food stalls and festival stands, making it perfect for a spring celebration.

Luckily, if you can’t get your hands on any pre-made hanami dango this spring, the Internet is full of authentic hanami dango recipes, often with suggested substitutions for hard-to-find Japanese ingredients. The process itself is remarkably simple. First, rice flour, sugar, and hot water are combined to form a putty-like dough. Cooks then divide the dough into thirds for coloring, using red food colouring or traditional ingredients for the pink dango, prepared yomogi or matcha powder for the green dango, and leaving the white dango uncolored. Finally, the three separate doughs are rolled into bite-sized balls and cooked in boiling water, cooled, and then arranged on a skewer. With recipes needing less than 20 minutes and as little as 4 ingredients, there’s really no excuse for not giving this one a try at home!

Funnily enough, hanami dango isn’t the only popular association between dumplings and flowers in Japan! In fact, the Japanese saying “hana yori dango” (dumplings rather than flowers) contrasts the two to express the idea that plain, functional things like filling dumplings are more valuable than superficial, decorative items like flowers. If anything, however, hanami dango seems to prove the very opposite: that dumplings can be both functional, decorative, and—most importantly of all—delicious!