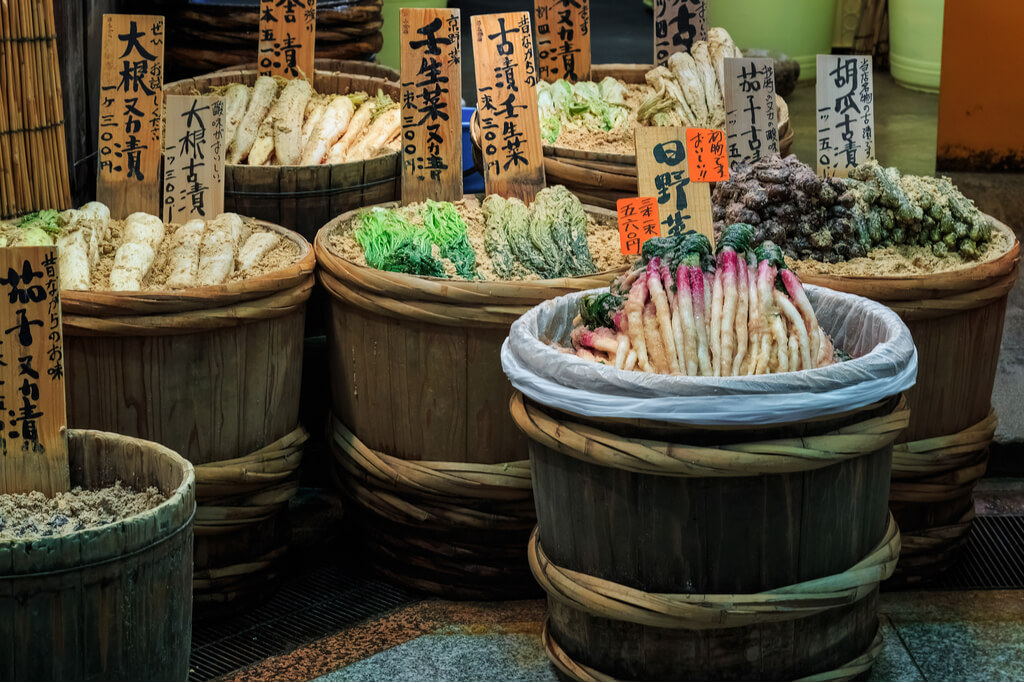 Cooking with Japanese seasonal vegetables ensures that everything you use is at its freshest, and of the highest quality, making your dishes even more delicious.

In Japanese cuisine, the concept of “shun” (旬) is very important. Shun is the celebration of those ingredients which are at their seasonal peak. Even better, including a variety of seasonal foods in your diet is great for your health, as different foods provide different essential nutrients.

This concept is still very much present in Japan today. With each seasonal change, the vegetables available in Japanese supermarkets change too.  Here is a list of 15 of Japan’s most popular seasonal vegetables. Perhaps you can include them in your own seasonal cooking as well!

Discover the beauty of the Japanese seasons with Sakuraco, a traditional Japanese snack box that features exciting new flavors every month.

Spring is the time of year for sansai, the most famous category of seasonal Japanese vegetables.

Rich in: Dietary Fiber, Thiamine, Niacin, Vitamin A, Vitamin B6, and Vitamin E

Bamboo shoots are the sprouts of bamboo that have just burst through the ground. They can be harvested fresh or found canned year-round in Japanese supermarkets. They are often cooked with soy sauce, sugar, and sake to make a popular nimono (braised dish)

Rich in: Vitamin A, Vitamin B, Vitamin C, Phytochemicals

It is named after the wasabi root for its spicy flavor, although actual wasabi is a separate plant. Wasabina can be eaten raw, boiled, or fried. The younger, more tender leaves are less spicy, great for salads.

In early spring the tips of butterbur buds pop up from above the snow, ready for harvest. Later, the stalks can also be harvested. It has a bitter taste but is delicious when deep fried as tempura.

Rich in: Carotene, Vitamin B1, Vitamin B2, Vitamin C, Calcium and Iron

Nanohana is a golden flower that blooms at the same time as the sakura. During this blooming period, it can be harvested from mountainsides and fields. The name of this plant is literally “vegetable flowers” because it is a beautiful flower with the taste of a vegetable. Nanohana is actually comparable to broccoli in flavor, and like broccoli, it can be served steamed or fried.

Angelica shoots are harvested from the tips of the Angelica tree, just as the green leaves are budding on the branches. Although naturally bitter, after going through a boiling process, the shoots become delicious and tender. They are particularly popular when deep fried as tempura.

Edamame is usually eaten simply boiled with salt as a healthy Japanese snack. It is a popular accompaniment to alcohol, often served at izakaya.

This bitter gourd is an acquired taste, however, it is common in traditional Okinawan dishes like the stir fried egg and goya: goya chanpuru.

Kabocha is a kind of winter squash with green skin and a bright orange interior. In Japan, kabocha is often served as tempura, in Japanese hot pot, or as a braised nimono. As soon as fall sets in, you can purchase pre-sliced quarters of kabocha at most grocery stores across Japan.

Rich in: Fiber, Potassium, Vitamin A, and Vitamin C

In Autumn, roasting sweet potatoes (yaki-imo) suddenly appear in the windows of supermarkets and convenience stores. Yaki-imo trucks also hawk their perfectly roasted potatoes from street corners all over town, the Japanese equivalent of summer ice-cream trucks. Roasted sweet potatoes do not need any added sugar or flavoring, they are a sweet (but healthy) treat all on their own.

While the slimy texture of their interior may be off-putting to some, taro roots are one of the healthiest Japanese vegetables. As they naturally include hyaluronic acid, necessary for collagen production, they are exceptionally good for the skin. Taro roots are often served simmered in warm soups and side dishes as the autumn months grow colder.

Winter is the season for nabe, Japanese hot pot. This staple of Japanese home cooking is a filling, healthy soup, perfect for cold winter days. It includes many winter vegetables, like the ones listed below.

Spring onions and leeks are the closest western equivalents to the Japanese negi. This allium is used to add an onion-like flavor to many dishes in Japanese cooking, like ramen, donburi, and gyudon. As a garnish, negi can be slightly spicy, however, after cooking, it becomes sweeter.

Daikon is used in many Japanese dishes from pickles (tsukemono) to oden. It can be boiled, deep fried as tempura, or grated on raw as a spicy topping. Daikon is also supposed to aid with digestion, so it’s the perfect vegetable to accompany a hearty winter meal.

Although originally from China, hakusai is a key ingredient for many Japanese winter foods, especially nabe. Also, while it has many nutrients, hakusai is mainly composed of water, making it filling while being low in calories, so it’s a great food if you are on a diet.

While lotus flowers bloom in summer, lotus roots come into season in the winter. These roots have a delicate, potato-like flavor. They are usually boiled, although the amount and method of cooking determine the texture of the roots, which can be either crunchy or melt-in-your-mouth soft.