Mochi Mochi! Read All About It! 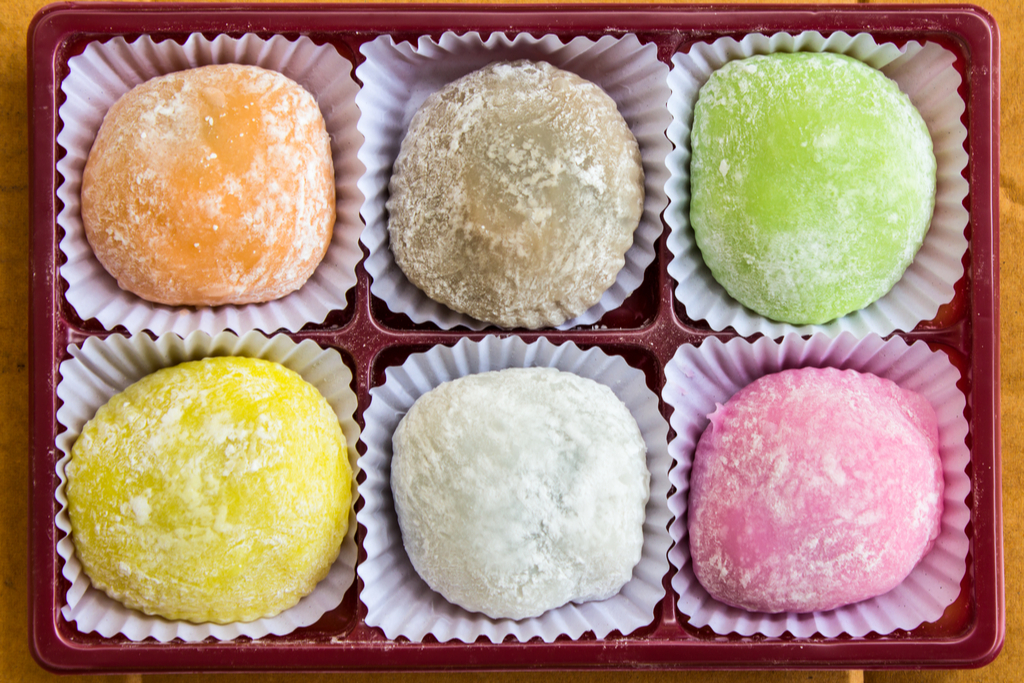 When mochi was first introduced to the West, it was originally called “Japanese Rice Cake”. However, thanks largely in part to social media, the word mochi has since entered the English language. And for the anime generations, the word is almost as ubiquitous as other Japanese loanwords like sushi, sake, or kimono.

Pillowy and chewy, savory, sweet, or in between, Japanese mochi has a long history and is an integral part of many traditions and rituals. It was a way to bring people together, to mark a celebration, and even to show off your status. But what is mochi exactly and how is it made?

Mochitsuki: How to Make Mochi

Starting with short-grain glutinous rice or mochigome, the process of making mochi, called mochitsuki (literally mochi-pounding), is entwined with the New Year’s holiday. The activity is long and physically exhausting, which is why unless you have professional mochi makers, a team is required. At least, when made without the aid of modern technology. The rice is washed and soaked overnight, then mercilessly pounded with wooden mallets, before finally being measured and shaped into individual portions.

From the preparation, to pounding, shaping and finally serving, making mochi can take days but it is an activity akin to holiday baking – not necessary but deeply treasured. Japanese families and communities take great pride in their homemade efforts, which can be frozen and enjoyed throughout the year. Sure, mochi is available all-year-round in convenience stores, supermarkets, and specialty shops, but like most things, homemade just hits different.

Interested in trying mochi? Experience delightful tastes & textures from Sakuraco – a teatime experience sent straight from Japan to your home.

Although kagami mochi, the two-tiered mochi decoration with a mandarin on top, is gaining awareness abroad, a perhaps lesser known New Year’s mochi culinary tradition is ozoni. This soup is made with mochi, vegetables and a miso or soy sauce stock and is enjoyed during the holiday season alongside osechi, another dish reserved for the beginning of the year.

Ozoni has been a traditional dish for New Year’s Day in Japan for over 500 years and was first enjoyed by samurai as a first dish to a ritual meal. Because of this long history, there are countless versions based on regionality. Eastern and Western Japan are a common culinary division, but this soup can vary even down to the prefecture!

During the New Year’s holiday, it’s important to relax and spend time with family, so the preparation of more complex dishes is done far in advance. Ozoni, however, is a very simple and humble dish, so it’s not unusual for the whole family to work together to make this delicious soup and even to customize it. After creating a rich broth, and then adding toasted mochi, chicken, and vegetables, the sky’s the limit with this holiday favorite.

When mochi is enjoyed abroad, it is often in the form of daifuku, a confection made by wrapping a thin layer of mochi around a sweet filling. However, daifuku is but one of a plethora of Japanese desserts, known as wagashi. “Wa” means “Japan” and “gashi” means “candy” or “dessert”.

When Japan was still an isolated country, there was very limited trade with other countries, which means access to different ingredients was limited. This is why many Japanese sweets are based around the same flavor palette of sweet azuki beans, sesame, and chestnut. Despite these limitations, there are many variations of wagashi and confectionery shops across the country still employing historical methods of production.

There is a popular Japanese folktale called Momotaro (Peach Boy) about a boy born in a peach, who goes on a quest to save his village from a group of terrible trolls. Before setting off on his adventure, his mother gives him kibidango as food to keep him strong.

Dango is a humble wagashi made with rice flour and water. The resulting dough is rolled into small balls, steamed or grilled, and flavored by dipping it in a sauce or adding a layer of topping. It was eaten by common people which is why it often features in folktales, just like bread would in Western stories. Dango can easily be adapted to suit different tastes, with endless flavor and color options, and is enjoyed throughout the year at festivals as a popular Japanese street food.

Although dairy was only relatively recently introduced as a regular part of the Japanese diet, Japan wasted no time finding creative ways to adapt it to local tastes. One fun example is mochi-aisu, otherwise known as mochi ice cream, which is now being imported into countries all over the world.

The dessert was first offered in vanilla, chocolate, strawberry and a few traditional Japanese flavors. However, Japanese companies now regularly release new limited-edition and seasonal flavors that range from delightful to straight out wacky. The number one mochi ice cream company in Japan, Yukimi, is famous for continually delighting the public with their creative flavors which can be found at most convenience stores and supermarkets. From tiramisu, to pudding, and black sesame to durian, there’s certainly something for everyone!

Which flavor are you? Take our quiz to find out!

A staple in Japan, it’s hard to believe that the first Mister Donut only opened in 1971. Nowadays, donuts aren’t considered an exotic Western dessert, but rather a sweet treat or even a cheeky breakfast.

But thanks to the rise of Instagram, there is one particular menu item that has seen a meteoric rise in popularity: the Pon de Ring “Mochi Donuts”.

Made with rice flour, these donuts have a unique mochi mochi (springy and chewy) texture that appeals to the Japanese palate. The ring is formed with 8 separate balls of dough, which give these desserts a unique, and very instagrammable, appearance. The balls can also be pulled off one by one, to add to the culinary experience.

These donuts have been around for years, but they’re still popular and still grabbing headlines because Mister Donut is always pushing the boundaries. They play around with flavors and partner with big brands for limited releases, such as Pokémon, and well-renowned Confectionery Companies, such as Mochi Cream Japan.

The Future of Mochi?

With more and more Japanese people moving to the city for work, local events like mochitsuki are falling out of favor and some worry the tradition may one day be lost forever. But, even though mochi may not be made by hand as much as before, this does not mean younger generations no longer want to make it themselves.

In fact, homemade mochi is still a thing, it’s just made in a machine instead. Like many technological advancements, there are always going to be growing pains. But there’s something truly beautiful about giving people the ability to enjoy fresh mochi at the click of a button.

Have you tried any of these types of mochi? Did you enjoy the texture right away, or did it take some time to get used to? Let us know in the comments below!