What is Japanese Wagashi? 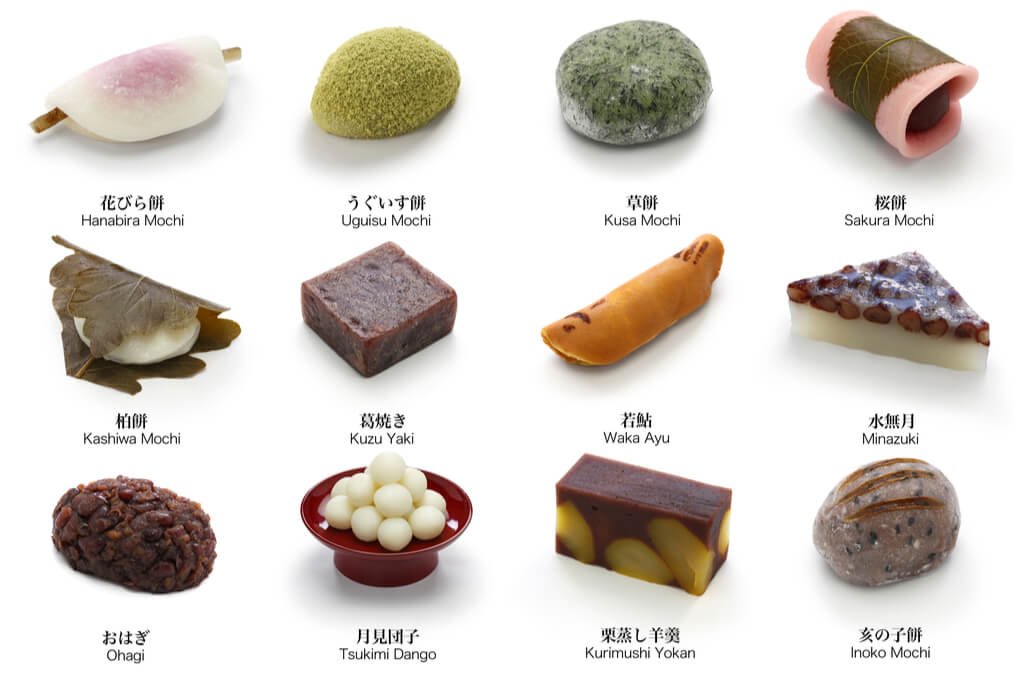 Japanese snacks are very popular among visitors and locals alike. They’re very easy to eat and come in different styles and flavors. While dagashi are more modern iterations of Japanese snacks, wagashi are traditional Japanese confections often served during ceremonies with tea.

Wagashi are great gifts since they have unique flavors that vary from region to region across Japan. In this article, we’ll talk about what wagashi is, where it came from, and the different types you can try around Japan.

The Japanese word for sweets, kashi , originally only referred to fruits and nuts. In ancient times, sugar was expensive to come by so naturally sweet fruits and nuts were used as sweets. With the increasing sugar trade between China and Japan, sugar became a common household ingredient by the end of the Muromachi period (1336-1573).

Strongly influenced by the production of tea, the creation of wagashi became popular during the Edo period (1603-1867). Wagashi are traditional Japanese confections that are often served with green tea during traditional ceremonies.

The term wagashi was coined during the Meiji period (1868-1912) to differentiate it from European sweets that were imported into Japan. Chinese confections and dim sum were cited as the original inspiration for the shape of these Japanese sweets, but wagashi have since then become more expressive.

Traditionally wagashi are plant-based, containing no dairy, and use agar as opposed to gelatin for texture. Because of that, they’re considered much healthier than western snacks which typically have higher sugar contents. They’re made with short grain glutinous rice which is steamed, pounded into a paste and molded into an intricate shape.

Other ingredients include mochi (rice flower), anko (azuki bean paste), water, sugar, cornstarch, and fruit. They’re usually named after poetry and have unique flavors from region to region and season to season. Seasonal snacks like sakura mochi are especially popular while chestnut flavors are preferred in the fall.

Where To Find Them

Today wagashi can be found all over Japan. They’re served at select cafes, restaurants, temples, and gardens where tea is served. Kyoto in particular has many traditional snack shops where visitors can experience wagashi. The Nakamise shopping street in Asakusa is also a good place to sample wagashi in Tokyo. They make great gifts to be brought back from business trips and are often found in Japanese department stores in major train stations.

If you’re interested there are also a lot of traditional wagashi-making classes available. The classes are led by certified instructors and participants can learn about the meaning behind wagashi as well as enjoy eating their own creation.

There are many different types of wagashi suitable for different seasons and unique to different regions. Here are a few of the most common types you’re likely to find.

The most common type of wagashi is dango. It’s eaten all year round and is typically found at festivals, although many convenience stores also sell them. They’re chewy round mochi balls on a stick and are covered in sweet-salty syrup made of soy sauce, sugar, and starch.

Namagashi is considered an edible piece of art due to its beautiful design, reflecting seasonal and natural shapes like flowers and leaves. It is especially popular to eat during Japanese tea ceremonies. Since it is the most delicate of all wagashi types it must be made daily and consumed while still fresh.

Daifuku is a small round mochi stuffed with a sweet filling, usually red bean paste. The name literally translates into “great luck” so daifuku mochi is “great luck rice cake”. It comes in many flavors. The most common flavors are ichigo (strawberry) daifuku and mame (soybean) daifuku

Dorayaki is a kind of cake that’s made of sweet red bean paste sandwiched between two layers of baked fluffy sponge cake. The name “dora” in Japanese means gong, reflecting its shake, and “yaki” means bake

Taiyaki is a Japanese fish-shaped cake. The “tai” in taiyaki is referring to the red sea bream fish the cake takes its shape from. Traditionally taiyaki is filled with anko red bean paste but you can also find taiyaki filled with chocolate, matcha, and even ice cream.

Manju typically has a pastry coating made by wrapping flavored ingredients like anko in kneaded dough and steaming it. Depending on the region the anko is replaced with other flavors like chestnut jam, or sweet potato.

Wagashi culture is very unique to Japan. These traditional Japanese sweets are a reflection of Japan’s humble nature and ever-changing seasons. Although wagashi can be commonly found in department and convenience stores, we highly recommend visiting traditional Japanese tea gardens and temples for an authentic experience. Have you tried wagashi before? Do you have a favorite type of wagashi? Leave a comment below.