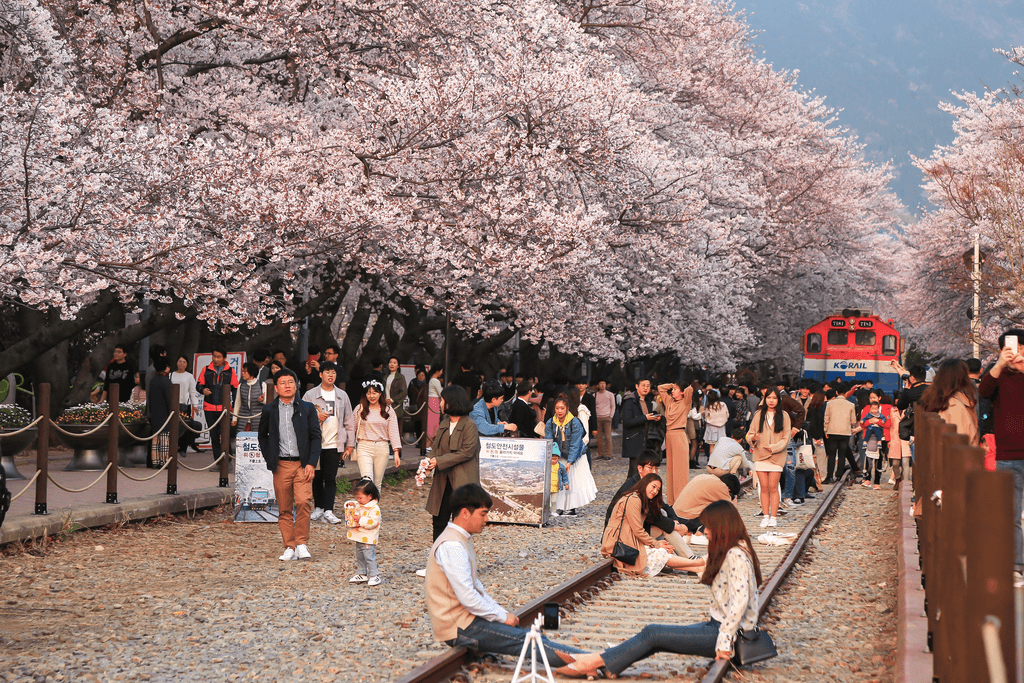 Thinking of Japanese symbols, besides Mt. Fuji, we’ve all come to think of cherry blossoms, or Sakura, right? Although cherry blossoms are present in many countries around the world, they are most loved and cherished in Japan. Every year, during the cherry blossom season, Japanese people eagerly participate in the cherry blossom viewing festivals, also known as Hanami festivals, which is considered a festival to welcome spring after a long cold period.

If you plan to visit Japan in spring in the near future, this is all that you need to know about the Hanami festival!

The Origin of Hanami Festivals

In Japanese, “hana” means flower and “mi” means to watch or look at. So, the Hanami festival literally is a flower viewing festival. The “flowers” here are mostly Sakura (cherry blossoms) or Ume (apricot or plum) blossoms.

This festival has a long history dating back to the Nara period (710-794). Around this time, Hanami was originally to view ume blossoms – an activity only celebrated at the tea parties of Japanese aristocrats. They often held parties under the plum or cherry trees to talk together, write poetry, or drink wine while watching the cherry blossom petals fall gently through the air.

However, by the Heian period (794-1185), the festival became popular for all people to enjoy thanks to Emperor Heian. From here, Hanami officially became a national festival, becoming one of the oldest traditional festivals in Japan.

Hanami combines the charming natural scenery with the participation of people chatting and eating while enjoying the beauty of the cherry blossoms – the symbolic flower of Japan.

Not having a Hanami festival in your area doesn’t mean you can’t celebrate the beautiful spring season like the Japanese. Sakuraco sends traditional Japanese sweets, snacks, and tableware to your door from local makers in Japan every month, perfect for an enjoyable tea time with family and friends this spring!

In Osaka, the lively residents and visitors often participate in the Hanami festival on the Okawa River – the center of the city. Here you can sit on a boat on the river, watching the cherry blossoms fly all over the two banks of the river. In addition, Osaka Castle, EXPO Park, and Hirakata park also offer marvelous views of cherry blossoms in Osaka.

When visiting Kyoto to participate in the Hanami cherry blossom festival, people gather in Daigoji Temple, Nijo Castle, Hirano Shrine, and Kamogawa River. Coming to Kyoto in the Sakura season, you can feel a more ancient and traditional aspect of Japan as people usually dress in kimono (traditional Japanese garb) and stroll along the old Japanese streets lit up by hundreds of cherry blossom trees.

Of course, this is the main activity at every Hanami festival. Depending on the location of the festivals, you can choose your favorite way to watch the cherry blossoms, such as walking, sitting under the trees in a park, or renting a boat to see the flowers on the river.

There are more than 50 different types of cherry blossoms for you to enjoy at the different hanami festivals in Japan, each of which has distinctive characteristics and is beautiful in its own way. In addition to the most commonly seen cherry blossom, called Somei-yoshino, there are other varieties of Sakura, such as ones with dozens of overlapping petals (Yae-zakura) or the drooping Sakura known as Benishidare.

You can also choose a beautiful spot to spread a tarp, display homemade dishes, and have an enjoyable picnic with family and friends. In some places, Hanami festivals are held until the late evening, when the cherry blossom trees are lit up, providing a beautiful view of Sakura, called yozakura, meaning “night Sakura”. So, visitors can go during the day or stay out until the night to enjoy the bustling atmosphere, needing plenty of food either way.

Enjoying tea under cherry blossom trees is also a very popular activity at Hanami festivals. Tea is also one of Japan’s specialties, so enjoying a tea party at a Hanami festival is a unique cultural experience that you should not miss if you have the opportunity to visit Japan during the spring season. It’s important to pick the perfect tea based on what Japanese picnic foods you prepare.

When it comes to Hanami, it is impossible not to mention traditional Japanese dishes. One of the dishes that often makes an appearance in Hanami festivals is the bento – lunch boxes filled with meticulous and thoughtful preparation. Moreover, Hanami would not be complete without Hanamizake, a favorite drink of Japanese people during the cherry blossom festival.

When to Celebrate Hanami

Sakura bloom depending on the climate of each region, starting from the warmest place in the Southernmost of Japan – Okinawa – as early as late January. Then they will gradually spread to the Northern parts in late March and early April or until May in Hokkaido.

So, Hanami festivals are held early in the Southern areas and later in Northern Japan. For that reason, people can travel from South to North to enjoy Sakura while immersing themselves in this festive season all over the country. Every year, the weather forecast centers will predict the time of the cherry blossom bloom, notifying their citizens of the dates and the most beautiful areas so people can prepare for the Hanami festivals.

Sometimes, wind or rain end them even earlier than that. So, it’s recommended to check out the status of the cherry blossoms at the places you want to visit and plan your time accordingly. Perhaps the most beautiful time of all is near the end of the season, when the petals fall like snow in every light breeze.

What Does Sakura Mean to Japan?

People are attracted to Sakura not only because of their beauty, but also their fragility and short lifespan. Japanese people see it as an analogy for human life, reminding everyone of humanity’s fragile nature and encouraging us to make the most of our short lives.

Then again, it goes without saying their popularity may have more to do with aesthetics. Whether seen up close as a single flower or from far away when it looks like a pink and white cloud, cherry blossoms have a very unique beauty.

If you have a chance to visit Japan in spring, don’t miss the opportunity to witness the beauty of the cherry blossom by taking part in a Hanami festival!