Winter Sweets, Valentine’s, and the Coming of Spring in Japan 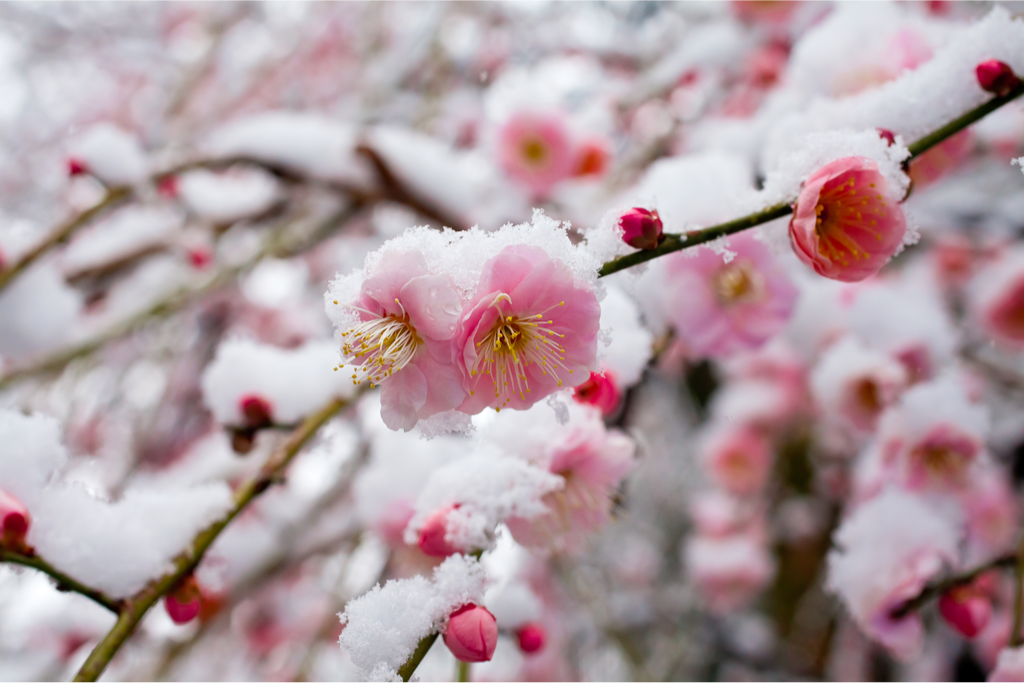 With Japanese New Year’s celebrations a quiet time of reflection and family visits, public life visibly slows down. Time spent warming up inside is sweetened with seasonal food and treats until the first blossoms of the year mark a return to public celebrations and outings.

Not a whole lot happens in Japan in January. With the exception of Okinawa, no area is enjoying particularly warm weather and most people spend the days staying warm inside or in a Japanese hot spring. February is the month when the country jumps back into gear beginning with the Japanese festival of setsubun at the beginning of the month. Read on to see what else follows.

A hot cup of tea and a treat are perfect for a winter break anywhere. As usual in Japan, there is no shortage of seasonal specialties for this time of year. Auspicious symbols are everywhere around the New Year and the two main ingredients for traditional Japanese sweets for this period have lucky connotations themselves. Dessert soups, sake-infused buns and hot fermented drinks are just some unique examples of Japanese snacks in winter.

Find out more about Japanese winter treats in our article: Five Japanese Sweets to enjoy in Winter.

The end of the year has been a season of gift-giving in Japan for centuries. While this tradition is slowly fading, gifts are still an integral part of building relationships in Japan. Buying shareable snack souvenirs for family friends and colleagues when going on a trip is a must and in a similar fashion, certain events or achievements like weddings or graduations call for a higher class of gift. Food and drink are popular for this occasion and gave rise to a peculiar luxury industry of Japanese fruit.

Whether it’s late winter white strawberries or luxury melons you’re interested in, find out about them in our article: Japan’s Luxury Fruit: White Strawberries, Square Watermelons.

Sakuraco sends traditional Japanese sweets & snacks, including chocolate, from across Japan to your door.

Setsubun translates to ‘seasonal division’ and marks the end of winter according to the Japanese lunar calendar. Starting off the season of Japanese festivals, or matsuri, it is celebrated in early February and mostly associated with driving away evil spirits from the past year, while inviting in all the positivity that spring brings with it. This is accomplished by a rather interesting ritual involving the throwing of soybeans at demons and consuming occasion-specific auspicious food and drink.

Learn the particulars of this unique celebration in our article: Setsubun Festival: Warding off demons to welcome Spring.

Despite Japanese chocolate now being world famous, it took a while for Japan to adapt to its taste. Japan had several early encounters with chocolate throughout its history, but it failed to make a lasting impression until the early 20th century. As Japan increasingly looked to the west for inspiration, a general change of lifestyle and a boost by a particular foreign holiday made chocolate the treat of choice in Japan.

Find out more about chocolate’s history in Japan in our blog: Chocolate in Japan: From Obscure Luxury to Staple Sweet.

With Christianity not a part of Japanese culture, the celebration found its way to the country on the back of a clever marketing campaign. Fitting in well with traditional Japanese gift-giving culture, Valentine’s Day was introduced by chocolate manufacturers and retailers as an occasion to gift chocolate to loved ones. As usual however, Japan does things just a little bit differently on Valentine’s Day: gender roles are reversed, chocolate is bigger than flowers and a second related holiday was introduced.

Read all about it in our blog: Valentines and White Day in Japan: Chocolate and Shrine Visits.

Sakura, the Japanese cherry blossom and the annual spring custom of viewing and celebrating beneath it called hanami, have become well known outside Japan. Less well known however is its predecessor, both in flowering time and as subject to be viewed: ume, the plum blossom. With its strong fragrance and sour fruit, its image is rather different from the subtle sakura, but no less indicative of the coming of spring.