A Guide to Hina Dolls: The Center of the Dolls’ Festival 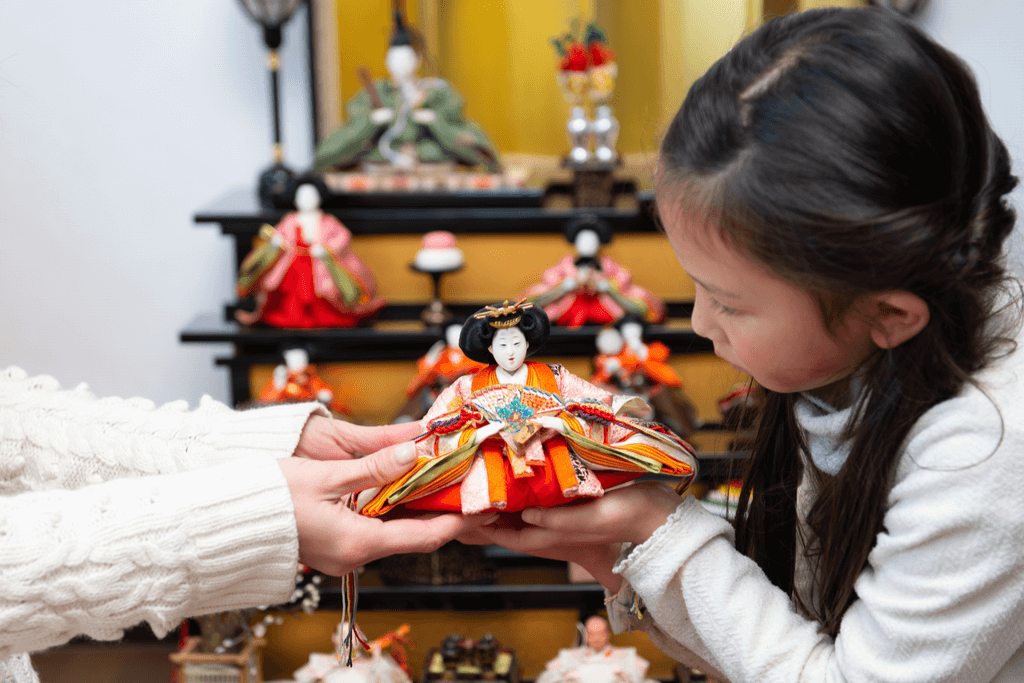 Otherwise known as Girls’ Day, or ‘Hina Matsuri’ in Japanese, the colorful festival Dolls’ Festival has been celebrated on March 3rd every year since the Heian Period (794-1192). A large part of this festival are a set of small dolls made to protect young girls in the family, called Hina Dolls.

Let’s take a look at these iconic dolls, sold throughout Japan in the time leading up to Girls’ Day.

Origins of the Dolls’ Festival

It is widely believed that the Dolls’ Festival is taken from a Chinese doll festival in which dolls are floated down a river, to carry away girls’ bad luck and misfortune. In the past it was also called ‘peach season festival.’

This was then mixed with hina-asobi, which means ‘playing with dolls.’ Court ladies and aristocrats’ children often played with paper dolls. The years went on and gradually this took on the nuance of being able to carry away misfortune if they were floated down the river on 3rd March (the 3rd day of the 3rd month). This custom spread across Japan, and soon every household started to make their own dolls for the festival on March 3rd each year.

By the Edo Period, it evolved to mean that displaying a set of dolls would protect the girls of the house, by absorbing any misfortune and taking away bad luck. In some ways, it is similar to other Japanese good luck charms, except that it absorbs bad luck. Nowadays, families buy and display these doll sets in their home for the same reason.

Need some snacks to help celebrate some Japanese holidays in your home country? Check out Sakuraco! Sakuraco sends traditional Japanese snacks, teas, sweets, and tableware from local makers straight to your home, so you can celebrate Dolls’ Festival, Hanami, and more!

When the custom first began in the Heian Period, the Japanese Hina dolls were made of paper or straw, but by the Edo Period, this had changed from paper to ceramic.

The most basic (the ones you can buy in the 100 yen shops) dolls consist of a couple of tiers, covered or lined with a red or pink ‘carpet’ and a set of boy and girl dolls holding a fan on the top, in ceremonial dress. This is often accompanied by pink, white, and green decorations.

In more elaborate hina doll sets, what is included really depends on the area – Tokyo, for instance, is different from Kyoto. Kyoto dolls have a fireplace or kitchen included in the set whereas Tokyo or Kanto ones don’t.

Hina dolls from department stores have between a two to seven- tier set, and often each layer doubles as a drawer, containing both the Hina Dolls and Dolls’ Festival snacks. Seven-tier sets can be quite expensive, but are often beautifully made.

The Meaning Behind the Hina Dolls

The highest amount of tiers is seven, and each layer has a different meaning:

Some hina dolls are incredibly expensive and can cost thousands of dollars, with the emperor and empress having their own imperial dolls. Some families even invest in their dolls, adding a small ornament each year.

How to Celebrate Doll’s Festival

While the tradition to float dolls down the river has more or less died out, there are still a few shrines where you can watch the doll floating ceremony on 3rd March.

Hina Dolls sets are displayed from mid/late February to 4th March, when they must be taken down, as they have absorbed the bad spirits and misfortune for the coming year.

As well as displaying the dolls set, families might display real or fake peach blossoms, too.

On the day, there is nothing special to do, except eat hina matsuri foods. Many local ward offices, community centers and schools will make decorations and have a gathering or small party to eat the foods and have fun on 3rd March.

The traditional colors for the Hina Dolls Festival are green (for Spring), pink (Summer), yellow (Fall) and white (Winter). These colors are symbolized in the different types of Japanese spring treats that people enjoy on this holiday. Special kinds of arare (puffed rice crackers), mochi (pounded rice cakes), and sushi are popular choices for the holiday. Arare in particular is an important part of the holiday as people use them for decorating their Hina doll sets.

The Dolls’ Festival is a lovely way to celebrate everyone’s health, especially those of any young girls in your life. We recommend going to check out the dolls and maybe even getting some for yourself too! You can easily build up your collection of dolls year after year.