Exploring the Tropical Paradise of Okinawa 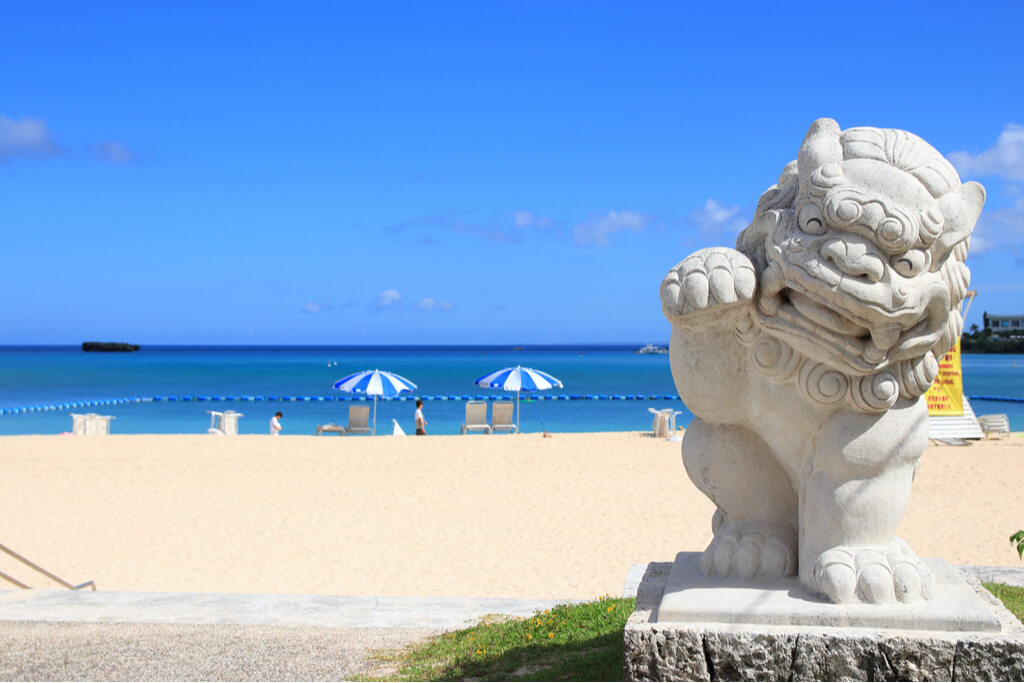 Famous for its gorgeous beaches, Okinawa is the southernmost prefecture and is located within the Ryukyu islands. For 450 years, it was the independent Kingdom of Ryukyu and only officially became the prefecture of Okinawa in 1879.

Linguistically and culturally separate from mainland Japan, the indigenous population, the Ryukyu People, continue to play an integral role in the unique ancestral and culinary traditions of the islands.

The Ryukyu culture is incredibly rich and diverse, so we’ve picked out some cultural, artistic, and culinary highlights for you to explore.

Shisa: The Guardian Lions of Okinawa

Walk around anywhere in Okinawa and you are guaranteed to encounter shisa, also known as shi-shi (lion) in the local language, which are guardian lion statues found all across the islands. They are believed to provide protection and often sit outside by the entryway to buildings, including shrines, hospitals, schools, companies, and private houses. Always in pairs, the female lion is closed-mouthed to keep in the good spirits, while the male lion is open-mouthed to scare away the evil spirits.

The shisa have certainly been doing a good job given that the prefecture lays claim to the highest rate of centenarians in the world. Japan is already world-renowned for the longevity of its citizens, but Okinawa’s impressively healthy senior population is a feat they credit to “yuimaru”, the spirit of helping one another, as well as the local diet.

Want to know all about shisa? Check out our guide to the guardian lions of Okinawa.

One deliciously sweet part of this island’s diet is the mineral-rich Okinawan brown sugar, kokuto, which is made by boiling sugarcane for hours to produce a rich dark syrup. The syrup is then dried out into blocks. Along with being a favorite choice for local bakeries, brown sugar in ginger tea is also a home remedy for colds and fatigue.

The Japanese island of Okinawa has one of the longest life expectancies in the world and, as such, the traditional Okinawan diet is one of the healthiest. A staple food of this diet is the Okinawa sweet potato, also called beni imo, purple sweet potato, or Hawaiian sweet potato.

Find out more through our blog, Okinawa Sweet Potato: The Perfect Purple Superfood.

Take a journey through Japan’s rich culture via its regional culinary traditions: Sakuraco ships traditional sweets & snacks from across Japan to your door.

A tropical island is always associated with an array of fresh fruits due to the long growing season. Okinawa is no different with a special variety of lime called shikuwasa. Packed full of vitamin C and antioxidants, this fruit features in everything from grilled meats, salad, and sashimi, to desserts and drinks.

The green citrus fruit is native to Okinawa and tastes similar to lemon and lime. It is mainly used to flavor dishes in similar applications as lemon. Since shikuwasa is common in Taiwan as well, it is also known as a Taiwan tangerine. It is rich in flavonoids and because of this, it is considered to be very healthy! Shikuwasa is a flavor strongly associated with Okinawa with cafes and shops selling shikuwasa-flavored juices and ice cream.

Did you know Okinawa has a famous castle? From 1429 to 1879, Okinawa and its surrounding islands were ruled by the King of Ryukyu. The main residence of the ruler, along with his family and court, was Shuri Castle (often called by its Japanese name Shurijo), which is located in the region of Shuri, just east of the now prefectural capital city of Naha. The castle has been subject to a tumultuous history, including being almost completely destroyed four times, but the people of Okinawa have always gathered to restore it as a symbol of hope and perseverance.

Read all about the history of this historical castle in our article, Shuri Castle: The Palace of the Ryukyu Kingdom.

Okinawa has its own unique culture, which includes performative arts like kumiodori. Created in the 18th century to entertain Chinese envoys at the royal court, kumiodori is storytelling through dance. It combines elements from Okinawa (indigenous performance) and mainland Japan (Kabuki and Noh), and the name translates to “combination dance” or “ensemble dance”.

Learn more about this cultural treasure with our article, Storytelling through Dance: The Art of Kumiodori.

Like many other cultures, Japan has a holiday to mark those who have passed away. In August, across Japan, there is a religious holiday called Obon that is a time to celebrate one’s ancestors and welcome their spirits to the mortal world for a family reunion. Generations young and old journey to cemeteries for ceremonies at the graves of family members, followed by delicious meals and enjoying each other’s company.

Although the holiday is based on the solar calendar in mainland Japan, in Okinawa it actually follows the lunar calendar. Because of this, the observance can take place anywhere from mid-July to early September. On the islands of Okinawa, Obon always starts on a Monday and it is common for Okinawans all over Japan to return to their hometowns during this time to be with their families.

Want to know more about this beautiful tradition? Check out our blog Okinawa’s Day of the Dead – Celebrating Life and Death through Food.

Ryusou: Okinawa’s Answer to the Kimono

Many people have heard of kimono and seen images of Japanese women (and men) in this traditional dress. But have you ever heard of ryusou? It’s the Okinawan equivalent and has some key differences from the mainland Japanese version. Learn more about this gorgeous traditional dress here, then test yourself with our quiz to see if you can tell kimono and ryusou apart!

After the Battle of Okinawa in 1945, much of the islands were destroyed and the culture lost. However, a resurgence of interest in Ryukyu culture from the 1970’s onwards has led to a flourishing of traditions that were once thought to be close to disappearing. As well, in the age of the internet, people can now learn more about this fascinating group of tropical islands from the comfort of their home, rather than having to trek all the way across the globe.

With several art forms and monuments now under UNESCO protection, it looks as though the culture of Okinawa will continue to thrive for many years to come.