What Are Shisa? Your Guide to the Guardian Lions of Okinawa 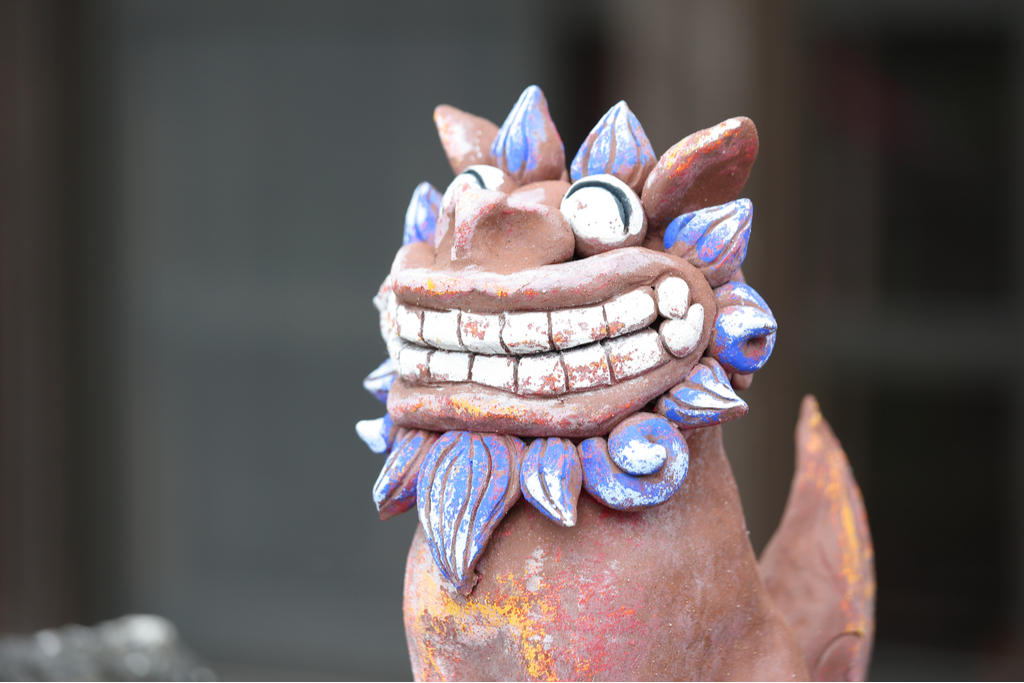 From large stone statues to small cute souvenirs, shisa are creatures from Okinawan mythology that stand watch and protect people from evil spirits. A cross between a dog and a lion, these fanged beasts are actually considered friendly and comforting. The statues are found all over the Ryukyu islands; perched on rooftops or standing guard at the front gates of residences and public buildings.

What Makes a Shisa a Shisa?

Although these gargoyle-looking creatures have origins in Chinese mythology, the Okinawan version always appears in pairs. Which one is which depends on who you ask, but in general the rule is:

The meaning of shisa is actually a regional variant from hundreds of years ago of shishi-san or “Mr. Lion”.

In mainland Japan, there is a very similar-looking lion dog figure called koma-inu (Korean dog) which were adopted from Korea, and are considered cousins of shishi. Although often indistinguishable, koma-inu are usually reserved for religious structures, whereas shishi can be found anywhere.

The story goes that the village of Madanbashi in Naha Port was continuously being attacked by a giant dragon. Although the villagers tried to fight back, the strength of the beast was too strong for them to resist. They were constantly losing family members and friends, and were beginning to lose hope that they would ever be safe.

But one day everything changed when the village was honored with a visit from the King of the Ryukyu islands. A local noro (priestess) noticed the King was wearing a necklace with a Shisa figure, a gift that he had recently received from a Chinese diplomat visiting the capital city of Shuri. The King found it charming and had worn it ever since.

While the King was in the village, the alarm was sounded and the dragon approached from nearby for yet another attack. The monster broke through village gates and everyone scattered to find a place to hide. As the dragon was wreaking havoc, the noro remembered her dream from the night before. She had been told to have the king “raise his necklace to the heavens”. At first, she had not understood the vision, but now she knew what to do.

The priestess told the King to remove his necklace and hold it up to the sky, and suddenly, there was a deafening roar. The shisa came to life and called down a huge boulder. With a thunderous crack, the dragon’s tail was crushed under the weight of the stone. Unable to move, the monster eventually died and the village was saved. Over time, plants and trees began to grow from the dragon’s body and the surrounding area was transformed into Gana-Mui forest.

From this time onwards, two shishi stood guard over the village, keeping them safe from harm.

The Stone Lion of Tomori

The oldest and largest shisa statue in all of Okinawa, the Stone Lion of Tomori, was erected in 1689 and is 5 ½ feet by 4 ½ feet large.

According to the village archives, Tomori had long suffered from repeated fires and consulted with the local priest on how to protect themselves. He told them the nearby Mount Yaese was a volcano and the source of their problems. If the villagers placed a “lion-shaped” object facing the mountain, they would no longer have to worry. They did as he instructed, and from then on, there were no more fires.

However, the worst was not yet over. In 1945, the Battle of Okinawa ravaged the island with ¼ of the Okinawan population losing their lives. But somehow, the stone lion prevailed and the bullet holes from the battle are still visible on the statue. There is even an iconic photo from that time with soldiers seeking refuge behind the statue.

In 1974, the Tomori Lion was declared a prefectural cultural asset and an important piece of folk culture. Locals still pray to the statue to ask for protection, and tourists often visit to pay their respect, as well as to remember the long history it has witnessed.

Shisa have been a source of artistic expression and inspiration for centuries, and not just in Okinawa. There is a Pokémon called Arcanine that is dog-like with a lion’s mane that is clearly inspired by the mythical Ryukyuan shisa.

Shisa also appear in dance performances. In a variation of the famous Chinese Lion Dance in Okinawa, the costume used by the dancers is actually the figure of a shisa.

Despite all the convenience and safety of modern life, many Okinawans still place shisa on their homes and businesses. Whether because of tradition or the desire for a spiritual safety net, it looks as though shisa won’t disappear anytime soon.

Have you heard of shisa before? Would you like them in front of your home?