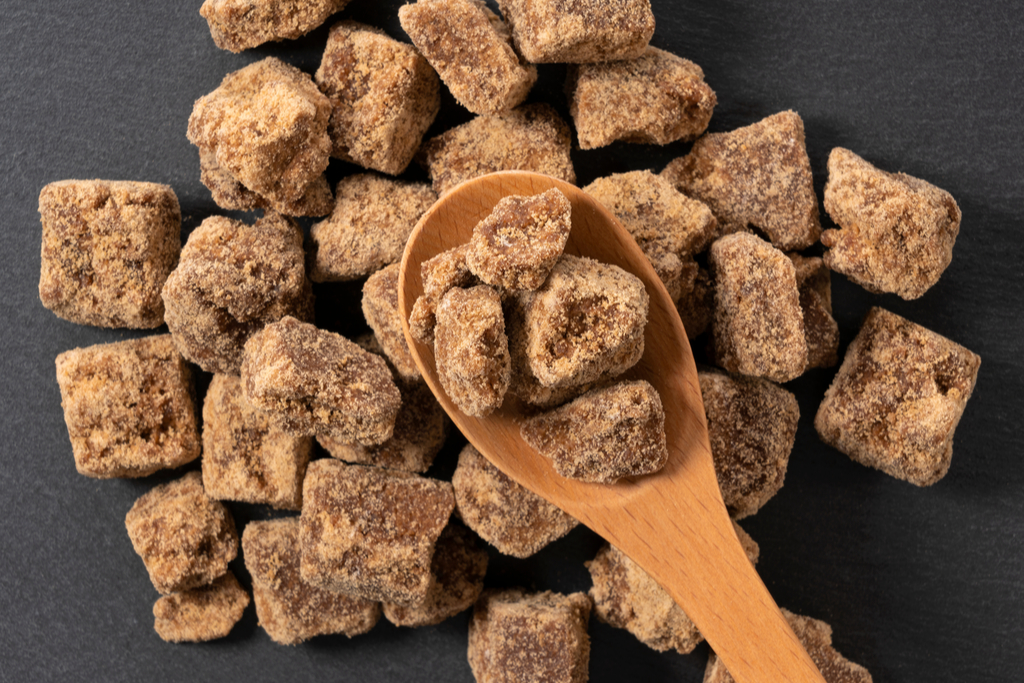 One deliciously sweet part of the Okinawan diet is the mineral-rich dark brown sugar which is made by boiling sugarcane for hours to produce a rich dark syrup.

Okinawa has an amazing food culture, with a mishmash of tropical dishes infused with indigenous Ryukyuan, Chinese, and Japanese influences. And when it comes to dessert, there is one ingredient which features heavily – kokuto, or brown sugar. While the humble name conjures images of the simple brown sugar we might use in everyday baking, the Okinawan variety is a much more refined product. Produced through a meticulous process, this mineral-rich sweetener is considered one of the secrets behind the residents’ longevity.

A Sweet Crop from China

Agriculture in mainland Japan revolves around one main product: rice. Which is why the main islands are absolutely covered in rice paddies. But further south in Okinawa, a much sweeter crop reigns supreme. Travel anywhere outside the cities on this group of tropical islands, and you’ll come across fields of sugarcane. Like many tropical islands and countries, the plant was introduced in the 17th century, when advancements in shipbuilding allowed sea trade to move more quickly. This meant plants could survive the journey, and agricultural techniques were no longer bound by geography.

Sugarcane cultivation had long been honed by Chinese agriculturalists, but one man in particular, Gima Shinjo, is credited with introducing it to Okinawa. He learned the techniques in China, and is considered one the “5 Great Men of Okinawa” for his success.

Why is Sugarcane So Important?

Before the age of refrigeration, keeping food from spoiling was a major concern. To solve this, Japan, along with many other countries, used pickling and drying as a means of preservation. While sugar and honey have been used for millennia in fermentation, otherwise known as sugaring, the cultivation of sugar on a large scale meant that it became much more affordable. It was no longer reserved for food preservation and was quickly adopted for confectionery as well as medicinal uses.

Discover Japan’s rich culture via its regional culinary traditions: Sakuraco ships traditional sweets & snacks from across Japan to your door.

Brown sugar is made from a specific type of sugarcane called Saccharum officinarum which is tall and hearty. For top quality kokuto, farmers prune and inspect the sugarcanes one by one using a sickle, and the canes are pressed by machine to extract the juice.

The cane juice is boiled at higher and higher temperatures to evaporate the water, and to purify the final product. Once the juice has become darker in color and viscous, about the same as melted chocolate, it is poured into molds where it is left to cool and harden.

Freshly made kokuto has a strong grassy and mineral aftertaste, but this softens within a few weeks. With a long process spanning from ingredient preparation, to fermentation, distillation, and aging, it should come as no surprise that each manufacturer has their own unique recipe. There is even a grading system from 5th to 1st class, 1st being the highest quality.

Real kokuto does not contain any additives or coagulating agents, so the heating process is integral to removing any impurities.

What Does “Kokuto” Mean?

Translating kokuto into English remains a semantic challenge. The word kokuto itself is composed of two kanji and literally means “black sugar”. However, the kanji for “black” in Japanese does not necessarily mean color, it can also mean dark, deep, or rich. Which is why this term in Japanese conjures up images of rich dark syrup, which is closer to brown rather than black. However, the word “brown sugar” in English is already taken for the basic baking ingredient. This is why there are so many different English names for this Okinawan specialty, including refined brown sugar, crushed black sugar, or muscovado.

Okinawan brown sugar, while a very sweet treat, also has some health properties. Traditional brown sugar for baking is highly processed and is made by mixing molasses with white sugar. In contrast, the method for making kokuto preserves much of the sugarcane’s natural nutrients.

As a result, kokuto is high in calcium, potassium, and iron. These properties give it the added benefits of preventing tooth decay, lowering cholesterol, and helping to relieve stress. It is still a sweet treat? Yes of course, but there’s something to be said for the Okinawan diet that is heavily plant-based, even when those plants are used to make desserts. It’s part of the secret behind the islands having the highest number of centenarians in the world.

Once the process of making kokuto was formalized, it was quickly exported to mainland Japan and adopted into traditional desserts. Kuromitsu, which is made using kokuto, is a refined sugar syrup. It is slightly thinner with a milder taste and is a central ingredient in many Japanese confectioneries. Some of these desserts include kuzumochi, manju, anmitsu, and nantu mochi.

Even after 300 years, brown sugar continues to delight Okinawans and foodies alike. The traditional way to enjoy kokuto is cut into bite-sized chunks and paired with tea to help relieve stress. While clumps of kokuto are easily found at shops in Okinawa or online, there are now numerous Japanese snack producers adding the flavor to their repertoire. From KitKats, to bubble tea, to salty snacks.

Nowadays, people want to be better informed about what they are putting into their bodies. This growing interest in healthy eating has led to a renewed interest in kokuto as a healthier sugar option. So it’s only a matter of time before Okinawan brown sugar is popping up in supermarkets all over the world.