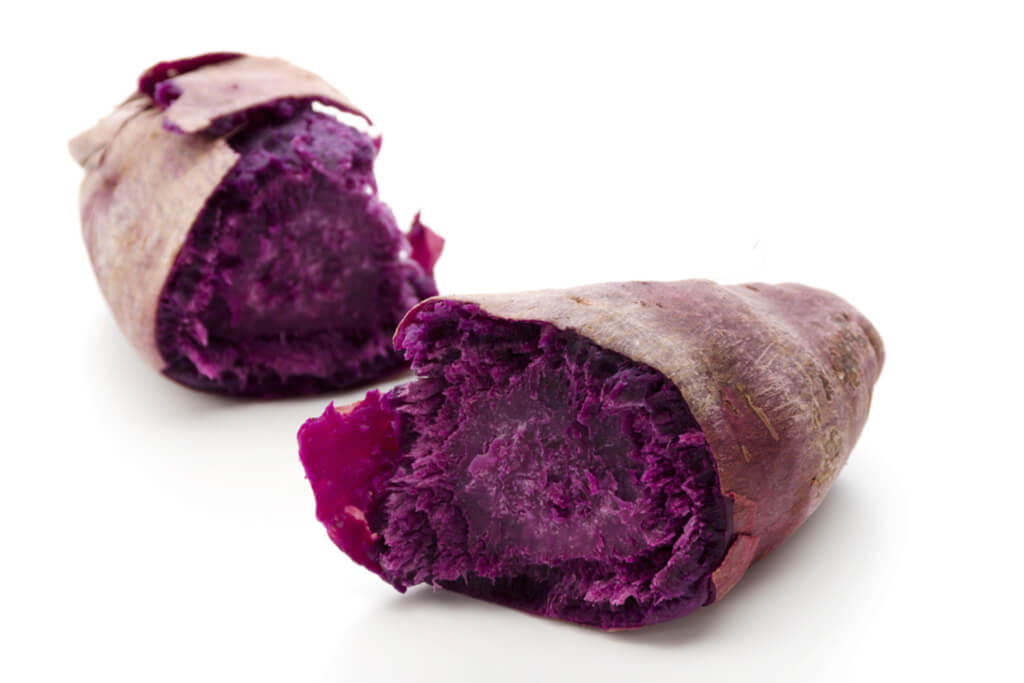 The Japanese island of Okinawa has one of the longest life expectancies in the world, as such, the traditional Okinawan diet is one of the healthiest. A staple food of this diet? The Okinawa sweet potato, also called beni imo, purple sweet potato, or Hawaiian sweet potato.

The Okinawan sweet potatoes are so nutritious that they even became Hollywood famous. They were featured on the Oprah Winfrey Show in 2009, then Dr. Oz listed them as one of his top five Superfoods of 2010.

These purple packets of goodness are nutritious, delicious… and gorgeous. The skin of the Okinawan sweet potato is a creamy beige, but inside they are vibrantly purple. They instantly elevate the appearance of any dish they are used in. The potato’s purple flesh is creamy and sweet, with notes of honey. Read on to find out more about these superfood sweet potatoes, including their origins and their nutritional benefits, plus some tasty recipes!

The Origins of the Okinawa Sweet Potato

The sweet potatoes were then introduced to Okinawa in the early 1600’s by Noguni Sokan. Noguni was a Japanese government official who was involved in trading with China. The sweet potatoes adapted so well to the Okinawan climate that they eventually became a staple crop, and their cultivation spread to other regions of Japan.

The Many Health Benefits of Beni Imo

These purple sweet potatoes have plenty of other nutritional benefits too. They contain four times your daily value of vitamin A, half your daily value of vitamin C, as well as manganese, vitamin B6, copper, iron, dietary fiber, and potassium. Studies have also shown that the potatoes have antibacterial and antifungal abilities, and may help with blood sugar regulation.

How to Introduce Okinawa Sweet Potato into your Diet

With all these nutritional benefits, Okinawan sweet potatoes are a great food to include in your meals. But how do you cook them? The purple sweet potato can be used in many traditional Okinawan and Hawaiian dishes, both sweet and savory. You can also use them in your favorite recipes as a substitute for regular sweet potatoes.

Mashed Okinawan sweet potato is a popular and easy side dish, which originates from the Hawaiian island of Kauai. Here’s a mashed potatoes recipe for you to try at home:

The result is a deep purple puree that is the perfect tropical accompaniment for any meal.

Okinawan sweet potatoes are also delicious when gently roasted in the oven. The heat caramelizes their natural sugars (a dish called yaki imo in Japanese). Another popular Okinawan way of serving them is sliced and deep fried in batter, as tempura. Because purple sweet potatoes are naturally sweet, they are popular in many desserts, including pie, mochi, cheesecake, and Japanese ice cream.

One of Okinawa’s most popular desserts, and souvenirs, are “Beni Imo Tarts”, also called “Purple Sweet Potato Tarts”. Boats of crispy cooks Okinawan sweet potato are topped with a layer of smooth, sweet potato paste to make a snack so good, you might just eat the whole pack. The tarts are so popular that KitKat has even come out with their own regional flavor mimicking them: a crispy cookie bar with a creamy purple potato coating.