Storytelling with Dance: The Art of Kumiodori 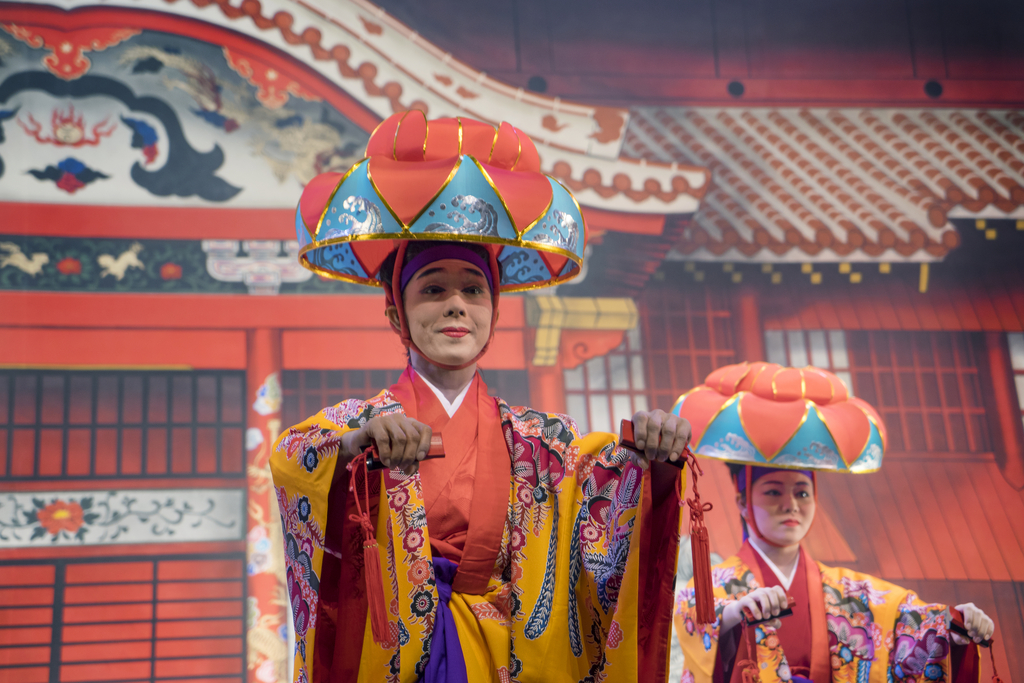 Created in the 18th century to entertain Chinese envoys at the royal court, Kumiodori is storytelling through dance. It combines elements from Okinawa (indigenous performance) and mainland Japan (Kabuki and Noh), and the name translates to “combination dance” or “ensemble dance”.

An Art Form for the Royal Court

Unlike other traditional dance and performance, we actually know the name of the creator for Kumiodori: Tamagusuku Chokun (1684-1734). He held the title of odoribugyo, Dance Magistrate, and was tasked with creating a style of performance to entertain envoys sent by the Chinese Emperor to crown the new King of the Ryukyu Kingdom. The envoys would stay for half a year, so it was necessary to prepare lavish forms of entertainment to keep them, and more importantly, the powers in China, satisfied.

The foundation of Kumiodori is a combination of three basic elements: words, music, and dance.

The performances recount historical events as well as legends. The characters have dialogue, but compared to the western style of theater where cadence depends on the choice of actor themselves, in Kumiodori, the phrasing follows a particular rhythm. This rhythm is based on traditional poetry as well as the distinctive intonation of the Ryukyu scale.

While mainland traditional performance arts, such as kabuki and noh, are in traditional Japanese, Kumiodori is in the traditional Okinawan language. Even today, there are still some native speakers of Okinawan dialects, but sadly the language is quickly disappearing, so this art form helps to keep it alive by continuously sharing it with new audiences.

The music of kumiodori is performed by a live ensemble featuring five traditional instruments: the sanshin, koto, flute, kokyu, and drum. The musicians are called jiutai, and unlike western musical theater, they are seated on stage, rather than in an orchestra pit.

The sanshin in particular has a strong role in Okinawan culture. It was heavily influenced by the Chinese sanxian, and was quickly adopted by the locals. It is considered the soul of Okinawan folk music, most people have one in their homes and the instrument makes frequent appearances at family gatherings, festivals, and other celebrations. The sanshin can easily be distinguished from the sanxian as well as the shamisen in mainland Japan by its visually striking snakeskin covering.

Discover Japan’s history & culture through its culinary traditions: Sakuraco ships traditional sweets & snacks from all throughout Japan to your door.

A combination of many styles, including Chinese, Japanese, and Okinawan dance, kumiodori performers use slow and deliberate movements to convey the story as well as the motivations of the characters. The restrained simplicity takes many years to master before it appears effortless, much like the rigorous training for classical ballet dancers.

There are three forms of movements used in kumiodori: realistic actions, emotional actions, and dances within a dance. Realistic actions would be the movement specific to the character (an older man’s slow gait, and young woman’s flirty demeanor). Emotional actions are when a performer uses dance to convey their character’s emotions or ambitions. A dance within the dance is much like in classical ballet or theater, when there is a performance that serves to entertain the characters and audience, rather than move the story forward.

When watching kumiodori, one thing that is sure to catch your eyes are the gorgeous colorful costumes. Similar to kabuki, with layers of rich fabrics and long, layered robes, the costumes offer clear visual clues to the audience about the characters. One aspect, however, is particular to Okinawan dyeing techniques – the bingata stencils on the fabric. The results are highly detailed illustrative designs in bright colors.

Seeing kumiodori bingata costumes in modern times is made all the more amazing because the art form nearly died out after the Battle of Okinawa in 1945. A bingata artist, Eiki Shiroma, took it upon himself to track down original stencils which had been taken by collectors and Japanese soldiers, returned to Okinawa, and passed on the art to his apprentices.

Similar to Noh, kumiodori promotes simplicity with the focus on the performers, rather than the elaborate set designs seen in Kabuki. The performers count on the audience’s imagination to fill in the blanks and for the performers to create an immersive experience.

When kumiodori was a form of entertainment reserved exclusively for the elite, the performances were selected from a canon of classic stories and historical reenactments. However, since kumiodori was made available to the masses, and then again revitalized in the 1970’s, modern stories were added to the repertoire.

Even with the UNESCO designation however, the future of kumiodori is uncertain. The majority of performers are in their 60s and there is worry there are not enough people in younger generations to keep the art form going.

In the past, only men were allowed to be performers and musicians, but since the Meiji Era (1868-1912) women have been allowed to partake in kumiodori. This change helped to significantly increase the number of trained performers, with women currently outnumbering men, but another modernization is now required. Perhaps with Social Media a whole new generation will be introduced to kumiodori and this beautiful art form can continue to inspire and awe audiences for centuries to come.

2019 marked the 300th anniversary of kumiodori, and although many performance halls have been closed due to COVID-19, including the National Theatre Okinawa, people are hopeful performers will be able to return to the stage soon.

Would you like to see kumiodori? What is a traditional performance art in your country?