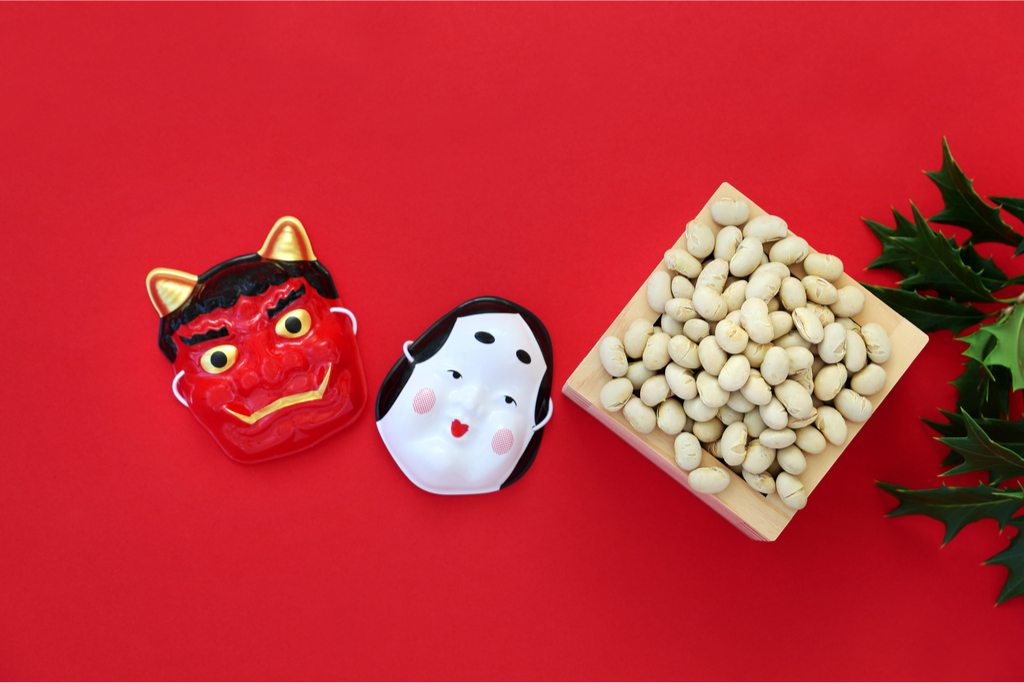 Spring is a time of renewal that is celebrated in most parts of the world, and Japan is no different. With the first day of spring in the northern hemisphere generally celebrated between the 19th and 21st of March, it’s tempting to assume that cherry blossom viewing marks the beginning of Japanese festivals, or matsuri, but it’s not that simple. The arrival of spring is actually celebrated much earlier in February with a festival called Setsubun.

Setsubun translates to ‘seasonal division’ and marks the end of winter according to the Japanese Lunar Calendar. It is celebrated in early February and mostly associated with driving away evil influences and inviting in all the positives that spring brings with it.

The Lunar New Year has historically been seen as a time where the spirit world and physical world come close, making it necessary for any potential wandering spirits in or around one’s house to be expelled.

The custom is centuries old and its nuances have varied greatly over time but always involved certain rituals to expel the bad from inside the home and invite in good fortune. At some point this was achieved by burning dried sardine heads, other times by hitting drums or fasting.

While some households choose to still hang a bundle of holly branches and sardine heads by their doorway to ward off evil, the most common ritual nowadays involves throwing roasted soybeans, usually at someone wearing a demon mask. Setsubun is not an official public holiday, but still serves as an important Japanese tradition observed by most families.

Looking to welcome spring with some authentic Japanese treats this year? Have a look at Sakuraco! Sakuraco sends traditional Japanese snacks, sweets, and teas from local makers, perfect for teatime or a snack.

The bean throwing ritual is known as ‘mamemaki’, literally ‘scattering beans’ and is particularly popular with children. It can be performed at home, a shrine or a temple, with many households in crowded cities usually opting for one of the latter two. Beans are an auspicious symbol in Japanese folklore, second only to rice in their symbolism.

When celebrating Setsubun at home, beans are either thrown out of one’s front door or at a family member taking on the role of the oni, or demon, by donning a mask. While throwing the beans it is customary to shout  ‘Oni wa soto! Fuku wa uchi! Literally ‘‘Demons out! Happiness in!’.

At a shrine or temple actors usually take on the role of the oni in a little performance, only to then be attacked with soybeans thrown by either the crowd or monks and priests participating in the performance. After the show, small bags of roasted soybeans to eat are usually given out too, often thrown from balconies, sometimes by celebrities like sumo wrestlers, actors or even geisha.

Eating one’s age (and in some cases an extra one for the new year) in roasted soybeans after driving away the oni is thought to bring further good luck, health and happiness for the coming year.

No matter where it is celebrated, the scattering and eating of beans is intended to symbolize purification and getting rid of any lingering misfortunes from the past year.

There are two other things consumed for Setsubun besides roasted soybeans nowadays: sushi and ginger sake.

Ehomaki sushi rolls are another food eaten for good fortune. Literally translating to ‘lucky direction roll’, these long sushi rolls are normally cut into bite-sized pieces but eaten uncut on this occasion.

The rolls are pointed into the lucky direction of the year (north-northwest for 2022) and then eaten whole in complete silence. Originally an Osaka custom, marketing campaigns have spread this practice nationwide.

In a similar marketing move by sake rice wine breweries, ehomaki is now frequently accompanied by ehonomi, literally ‘lucky direction drinking’. Sake, much like the rice it is made out of, plays an important role in Japan’s domestic Shinto religion. Used for purification in rituals, drinking it for certain occasions is said to have the same effect. Drinking sake rice wine in the lucky direction is of course meant to further increase one’s fortune for the coming year.

Do you have any local customs to celebrate the coming of spring? Let us know in the comments below!