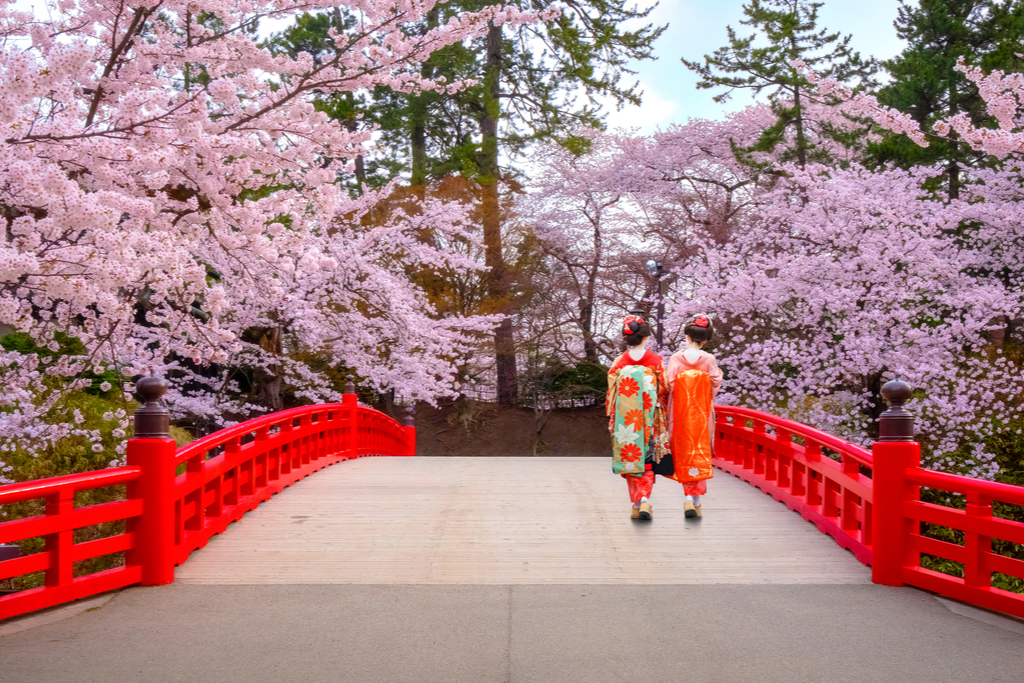 Sakura, the Japanese cherry blossom and the annual spring custom of viewing and celebrating beneath it called hanami, have become well known outside Japan. Less well known however is its predecessor, both in flowering time and as subject to be viewed: Ume, the plum blossom.

With a large part of Japanese culture and traditions revolving around the passing of its four distinct seasons, it’s no surprise that flower viewing is an activity popular all year round. While hanami literally means flower viewing and can be used to refer to any kind of it, it almost always refers to the sakura cherry blossom. When the custom of celebrating among blossoms originally found its way from China to Japan however, it was reserved for plum trees and the upper class.

Much like sakura, ume blossoms are associated with spring because they are among the first blossoms to open every year. Usually they bloom from mid-February onwards, beating sakura trees by a whole month. They were and are seen as a symbol of renewal, good fortune and the beginning of spring, but that is where their similarities end.

The image of the plum blossom is one of strength and perseverance. Japanese plum trees bloom in the cold season, have a fragrant, sweet smell and their sour fruit is used to make two staples of Japanese cuisine with a particularly strong flavor: Umeboshi, sour pickled plums and umeshu, sweet plum wine.

Interested in trying out some unique Japanese flavors like ume for yourself? Sakuraco sends traditional Japanese sweets & snacks from across Japan to your door.

While translated as plum, the ume fruit is actually part of the apricot family. Much more sour than a Western apricot however, ume are usually processed before being consumed. One way to do so is by pickling them in salt.

The result is salty, extremely sour and usually eaten in small amounts on top of rice. Umeboshi is said to come with a whole range of benefits such as aiding digestion, preventing nausea and even curing hangovers.

Another way to enjoy the sourness of ume plums is umeshu, plum wine. Umeshu is made by steeping fresh plums in a mix of just distilled liquor and sugar. Available for purchase in restaurants as well as stores nationwide, it’s also a popular thing to make at home, particularly for those with an ume tree in their garden. The result is very sweet with a bit of leftover sourness.

Sakura has a more reserved character and is appreciated for its fleeting beauty. Cherry blossom season heralds the arrival of spring’s warmer weather and the renewal that comes with it. Japanese cherry blossoms have almost no scent and while they are used in sweets and for their color, they bear no or inedible fruit as they were cultivated for their blossoms.

With Japan gradually cutting back its ties with China and slowly developing its own culture throughout the Heian period (794 to 1185), sakura became the spring flower of choice for court nobles to view and celebrations grew over time. Centuries later the practice became accessible to commoners as well and gathering to celebrate hanami with food and drinks under the cherry trees turned into a yearly ritual for all ranks of society.

While sakura viewing is now focused on getting together in groups and welcoming spring, viewing ume and other flowers tends to be a more individualistic endeavor. Ume may be the start to hanami season, but there are plenty of other noteworthy blossoms to go see throughout the year, with many locations attracting huge crowds:

In bloom from April to May, azaleas are in season right after sakura. A popular flower since the Edo period (1603-1867), its white, red, pink or purple blossoms draw crowds at special events every year.

As sakura and ume are for spring, hydrangeas are signs of Japan’s summer and rainy season. In bloom from June to July, the blue, purple, red and pink flowers are another extremely popular hanami opportunity.

Japan’s autumn colors don’t really fit the flower viewing category, but are yet another marker of seasonal change that people make an effort to go see. Very similar to hanami, fall foliage viewing or koyo, has a centuries old history in Japan and continues to draw people outside in fall to enjoy the best the season has to offer.

Are there any seasonal events or traditions involving flowers where you are? Let us know in the comments below!