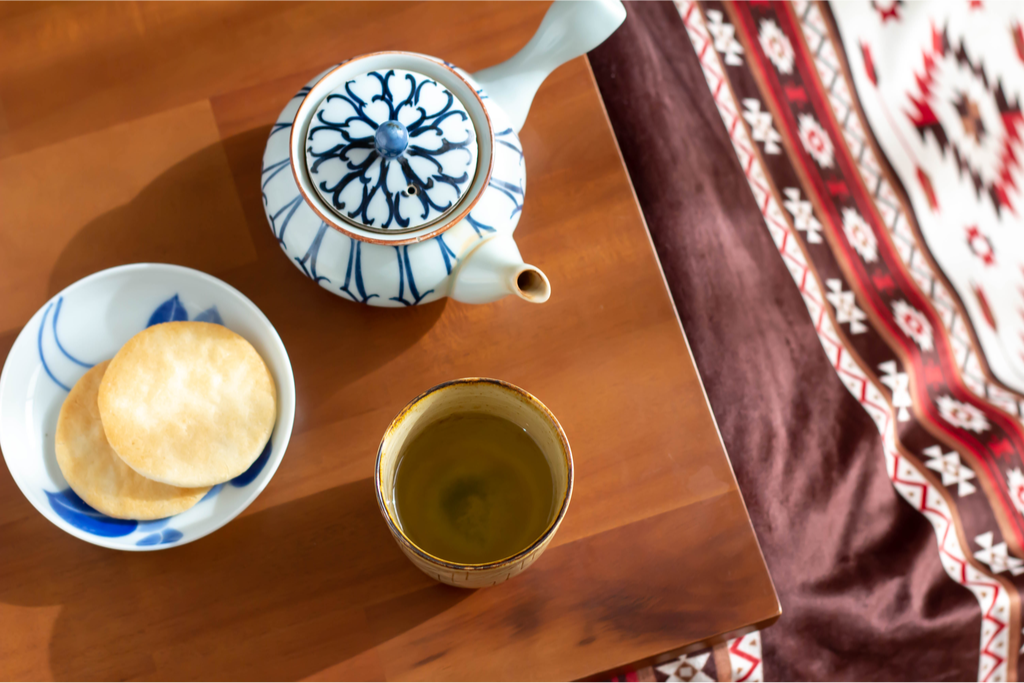 More than any other season, winter is the perfect time to have a break over a hot cup of tea and sweet treat. As usual in Japan, seasonal specialties abound and cater to all senses. Dessert soups, sake-infused buns, and hot fermented drinks are just some unique examples of Japanese snacks in winter.

Japanese winter sweets mostly feature two ingredients that also happen to be auspicious symbols in Japan’s Shinto religion: rice and beans. Pounded white glutinous rice called mochi and a sweet red bean paste known as anko in fact form the basis for most traditional Japanese sweets or wagashi. All the items on this list feature one or both of these ingredients, but still manage to achieve very different tastes and textures.

Mochi in particular is a prominent feature in winter, as rice is harvested from October through to the new year. It’s also central to a tradition that celebrates the end of the harvest: mochitsuki, mochi pounding. Freshly harvested rice is pounded into mochi to then be enjoyed in dishes over New Year’s and the winter period.

Also called zenzai depending on the region, oshiruko is a Japanese winter sweets staple made by boiling adzuki red beans in a mixture of water and sugar. Western Japan uses smooth red bean paste for its oshiruko, while eastern Japan prefers to use whole beans to make zenzai. Toasted pieces of mochi are usually added with further toppings like nuts optional.

The soup can be served both cold and hot, with the latter usually more popular in winter. Oshiruko is so popular it can even be found pre-made in Japanese convenience stores or canned in heated vending machines.

These Japanese mochi balls with a sweet filling are eaten all year round, but come in many seasonal varieties and colors. At their most basic they are filled with anko, which can be replaced by almost anything sweet. Coffee or pudding are some of the more extravagant fillings, with seasonal fruit most popular. Just in time for the season in February, strawberry filled ichigo daifuku are extremely popular.

Unlike daifuku, the filling in a manju is encased in a flour-based dough. Manju buns are steamed or baked, and like daifuku, most often contain anko red bean paste. While different fillings also exist, variations in the dough are more common. A myriad of local varieties exist using different types of flour resulting in different textures and tastes.

As the name suggests, sake manju are made by using sake, Japanese rice wine. More specifically they are made using a byproduct of the fermentation process: sake lees. Highly nutritious and famous for their health benefits, the lees are used in a variety of dishes. In this case the dough takes on the light flavor and aroma of sake without the alcohol content.

With Japanese sake production taking place over the winter months from November to March, sake manju are a seasonal treat said to be a good vitamin source.

Easily the most artistic seasonal sweet on this list, nerikiri are highly stylized traditional Japanese sweets served for Japanese tea ceremony. Nerikiri literally means ‘kneading and cutting’, underlining the artisan focus of this particular sweet. Made out of only sweetened white bean paste and glutinous rice flour and then tinted with colors, nerikiri are sculpted to reflect the season they are served in.

Rather than a casual snack, nerikiri are reserved for special occasions and celebrations. Designed to compliment the strong, bitter flavor of matcha tea, their taste is more reserved compared to other Japanese sweets.

Winter nerikiri reflect the season through snow or New Year’s motifs or plants such as the plum blossom or yuzu fruit.

Literally ‘sweet sake’, this thick, nutritious and sweet drink contains either no or very little alcohol. Boasting a history of over 1000 years, this drink is made by fermenting a mixture of steamed rice, water and koji, a fungus starting the fermentation process. Sake lees can be used as a shortcut in the process, but lead to low alcohol content rather than none.

Amazake is traditionally a cold summer drink said to help beat heat fatigue, but in the present day is mostly a winter favorite that is frequently sold at festivals and even given out at shrines to mark the New Year. Unlike sake, amazake is un- or only roughly filtered, giving it an almost porridge-like appearance. Like most fermented food, amazake has been lauded as a superfood for its health benefits and is even said to combat hangovers.

Like oshiruko, amazake is popular enough to be found both hot and cold in vending machines nationwide.

Have you tried any of these? What was your impression? Let us know in the comments below.