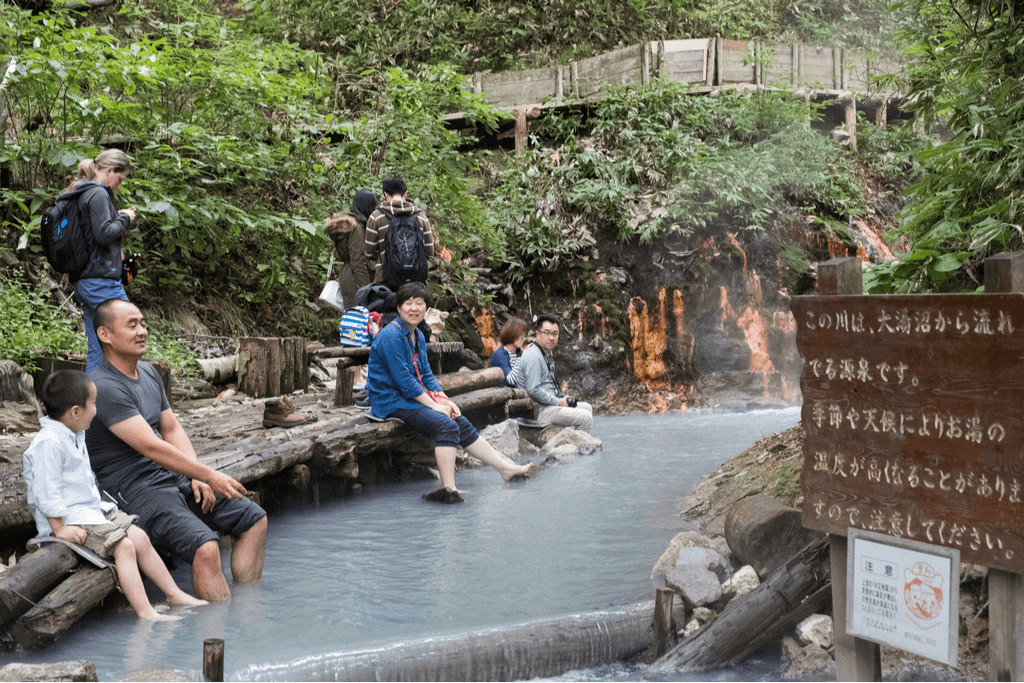 Onsen (Japanese hot springs) towns are little resort areas whose main features are their hot springs and hospitality. Many tourists flock to these areas when they want to get a break from the city, look for a health retreat, or just want to soak in each area’s famous waters! No matter which region of Japan you’re in, there’s bound to be an onsen town waiting for you!

In the frigid north of Hokkaido resides Noboribetsu Onsen. It has been both a hot spring resort and tourist destination since the Meiji period (1868-1912) and is one of Japan’s best onsen towns. It features nine types of onsen, primarily sourced from Jigokudani or Hell Valley, a valley named after its bleached rocks, burning-hot pools, and noxious sulfur odor.

Noboribetsu Onsen is also close to Lake Kuttara. The lake is filled with pristine water and is famous for its round shape. The name ‘Noboribetsu’ comes from the area’s indigenous Ainu word ‘Nupuru Petu’, meaning ‘a dark blue river.’ It’s also close to the ocean, so it’s a perfect way to experience Hokkaido seafood.

Not sure about the different onsen types or even what is an onsen? Learn all about it on our other blog!

Looking to experience Japanese culture in your own home? Take a look at Sakuraco. Sakuraco sends traditional Japanese snacks, teas, sweets, and kitchenware, so you can bring a taste of Japanese culture right into your home (even before or after a bath)!

Discovered by a silver miner, the hot spring baths in Ginzan, or ‘silver mountain’, have outlasted the silver. The onsen here are primarily sulfur and chloride onsen. Although it was a nationally recognized onsen area, it was largely unknown due to its remote mountain location until it was used as the setting of the 1983 drama, Oshin.

Today, this Japanese onsen town is famous for its historic ryokan (traditional Japanese inn), making many travelers feel like they traveled back in time.

Halfway up the slopes of Mount Azuma and west of the center of Fukushima City, you’ll find Takayu Onsen. The hot springs here are well known for their high concentration levels of sulfur, which have a variety of health benefits, including clearing acne and skin blemishes.

This onsen resort town takes pride in its 400-year-old history and now features many ryokan around the entrance of the Bandai Azuma Skyline sightseeing road. These ryokan use water pumped directly from the source, allowing guests to enjoy the waters all across this onsen town.

Two hours from Tokyo by train lies Kinugawa Onsen in beautiful Nikko, Tochigi. Named after the river that flows through the town, hot springs were found in this area during the early Meiji period. The onsen here are simple onsen and are said to be good for burns.

Today, ryokan line the riverbank, and many of the restaurants and stores promote the local cuisine! For those looking for a little more adventure, the Kinogawa Onsen Ropeway and Hunter Mountain Shiobara Ski Resort are just around the corner!

Dubbed one of Japan’s Three Famous Onsen by the Zen priest Banrishukuku during the Muromachi Period (1336-1573), the hot springs here are known for their reputation to “cure any ailment except heartache.” This Japanese onsen town features acidic, sulfur, and aluminum onsen, allowing it to live up to its reputation.

In fact, Dr. Erwin Von Balz, a German doctor who was teaching at the Tokyo Imperial University in the early 20th century, regarded this onsen town highly and praised its healing benefits. Yubatake, or the Hot Water Field, is the source of the hot springs and is located at the center of the town. Many tourists enjoy strolling around this area after enjoying their baths.

Another member of Japan’s Three Famous Onsen, Gero Onsen has a reputation among women for its skin-smoothing benefits. The simple onsen here are colorless, transparent, smooth, and tinted with a faint aroma. The main hotels and ryokan in this area are in the hills across the Hida River.

The town is also known for its beautiful gassho-zukuri (a traditional style of roofing) village recreation located nearby. For those that want to experience the baths, there is a six-month spa pass that can get you three visits per day into any of the participating ryokan.

Located on the edge of the Noto Peninsula is Wakura Onsen, one of the oldest and most luxurious Japanese onsen towns, with several ryokan facing the beautiful Nanao Bay. The hot springs here are chloride onsen, which are great for relieving pains in the joints and back.

Wakura Onsen is also known for being the gateway to Noto Tourism as it is close to Noto Island, a famous spot known as a leisure zone in the sea. The ryokan here offer many amenities, allowing many visitors to enjoy themselves within their grounds.

The last member of Japan’s Three Famous Onsen and one of Japan’s oldest hot spring towns, Arima Onsen is located within Kobe City, making it a popular weekend getaway for residents of Kobe and Osaka. The onsen here are famous for their healing properties and are categorized according to their color: Kinsen (golden onsen) and Ginsen (silver onsen).

The brown Kinsen is an  iron-rich onsen, popular among those suffering from arthritis, skin ailments, and muscle pain. Meanwhile, there are two Ginsen springs with one carbonated boosting circulation and metabolism, and one radioactive onsen promoting cell activation. Today, the small town celebrates its millennia of history with its many visitors.

Perhaps one of the most unique Japanese onsen towns, Shirahama Onsen gets its name from the sand beach located near the water, allowing its visitors to enjoy both Japanese bath culture and beach culture.

Shirahama Onsen is also one of the most historical onsen in Japan and, like Arima Onsen, draws its hot springs from high-temperature groundwater from tectonic plates beneath the sea  instead of from volcanic sources. The hot springs here are chloride and hydrogen carbonate onsen, and there are several public baths for visitors to indulge in during the day.

The largest onsen town in Shimane Prefecture, Tamatsukuri Onsen has many luxury ryokan. The town isn’t as vibrant as other hot spring towns, but it shows off its value in its historical preservation. The Tamayu river flows through the town and is lined with cherry blossom trees and acts as a natural footbath for those wishing to take a break. The onsen here are sulfate onsen and were once referred to as ‘the hot springs of the gods’ due to their healing properties.

Located 25km north of Shimonoseki and at the foot of the Onigajo mountain range, Kawatana Onsen is a quiet hot spring town with origins in myths and legends. The onsen here are radioactive onsen and can be enjoyed in six different accommodations.

Many of the ryokan and restaurants in the area offer many regional specialities like Kawara soba, a dish in which tea soba is placed on a heat tile and served with dipping sauce, fugu (puffer fish) dishes, and local confections.

The third of Japan’s oldest onsen, Dogo Onsen is located to the east of central Matsuyama. Due to its beautiful bathhouses, it is a popular destination spot for many tourists and often welcomes VIP guests like the Imperial family.

Dogo Onsen Honkan is a gorgeous bathhouse from 1894 and is said to have been the inspiration for Hayao Miyazaki’s Spirited Away. The other two bathhouses, Asuka no Yu and Tsubaki no Yu, while not as grand, still draw in a considerable number of visitors to bathe in the simple onsen each day.

Oita Prefecture is so famous for its onsen, it has earned the nickname of Onsen-ken (Onsen Prefecture). Within Japan, Beppu Onsen reigns supreme as over 130,000 tons of hot spring water gushes from the ground each day.

Beppu Onsen is divided into eight major hot spring areas known as the “Beppu Hatto,” and each has a defining characteristic ranging from rustic scenery to mountain resort. Beppu Onsen plays host to ten different types of onsen, making it one of the most versatile onsen towns in Japan!

Another one of the Onsen Prefecture’s many offerings, Kurokawa Onsen retains its traditional Kyushu culture and calm atmosphere, rejecting modern updates that would affect the tranquility of the town. It is famous for its many outdoor spring baths, with some located next to flowing rivers or impressing visitors with their size.

Many historical baths remain intact, and visitors can soak in the same sulfur hot spring baths that feudal lords once did. Kurokawa Onsen is so popular that travelers should book a year in advance for peak seasons like Golden Week or New Years.

Have you ever been to any of these Japanese onsen towns before? What was your experience like? Tell us in the comments below!