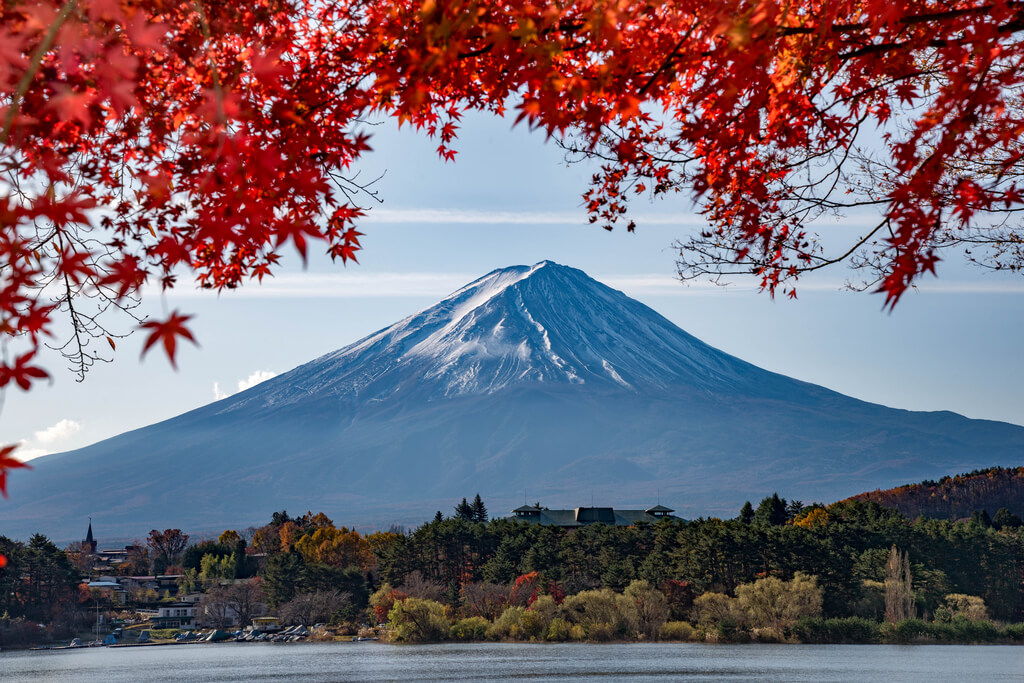 A site of pilgrimage and an inspiration to numerous artists and poets over the centuries, Mt. Fuji is one of the most climbed mountains in the world. On a clear day, the impressive and solitary volcano can be seen all the way from Tokyo, 100 km away.

The mountain has long been considered a site of reverence for both Shintoism and Buddhism, both of which believe gods or spirits are everywhere and in everything. The respect for Mt. Fuji was such that religious ceremonies were initially held away from the mountain, but the mountain eventually became the site for ascetic Buddhism, which features Shinto elements. It was during this time that a place of worship, the Dainichi Temple, was finally erected upon the summit. Even in modern times, the religious traditions continue with a ceremony held at the start of every climbing season to pray for the safety of climbers.

Every year, over 200,000 people hike all the way up Japan’s tallest mountain, doing their own version of a pilgrimage that is thousands of years old. While the mountain was once feared and revered from a distance, now Mount Fuji is a popular destination for both novice and experienced climbers. Are you hoping to climb the mountain one day? Here are 7 Things You Need to Know about Climbing Mt. Fuji.

When people conjure up an image of Japan in their mind, Mount Fuji is right along with geisha, sushi, and shrines. Almost anyone, regardless of whether they have visited Japan, can instantly recognize the shape. Which is why so many restaurants and snack makers in Japan are constantly creating delicious things inspired by the volcano.

From curry, to cookies, to jelly, read more to learn about the wonderful world of Fuji-shaped foods.

With a name meaning “mountain pear”, Yamanashi quite clearly has strong associations with fruit cultivation. The numerous valleys in the prefecture, combined with the extreme heat and cold of the seasons, makes for absolutely idyllic growing conditions.

Thanks to the widely different temperatures throughout the year, there are specific crops that thrive in certain seasons. Strawberries are grown in winter and spring, peaches and cherries in the summer, and pears and grapes in fall. Some of Yamanashi’s most famous fruits have long histories that can be traced back through writings by scholars and nobility, whereas others are more recent imports. Check out our blog to learn about the fruits Yamanashi is famous for.

Located in Shizuoka with a striking view of Mt. Fuji in the background, many people have unknowingly seen the tea plantations of Makinohara. As one of 8 tea regions in the prefecture, the vivid green rows of tea leaves are about as picturesque as it gets. And in this small city, it’s all about the tea.

It likely is no surprise to anyone that Japan absolutely adores tea. But Japanese consumers are especially motivated to actively seek out local blends. Moreover, tea is a popular souvenir since many regions across the country produce their own variety, along with many other Japanese staples, such as miso paste, sake, and rice.

Mount Fuji has been at the center of Japanese spiritual practice for thousands of years with countless individuals summiting the volcano in pilgrimage. Although the volcano is now considered dormant, in the past it was both a site of reverence and source of apprehension, much like the gods being worshipped in ancient times.

As a result of the immense impact this infamous volcano had on the lives of the people who lived within its wake, like many mysterious forces, folktales were created as a way to explain the natural phenomena. While many Japanese myths take place in imaginary or unnamed lands, there are quite a few that mention the mountain specifically. Read our blog to learn more about these timeless stories.

In 2013, Mt. Fuji was added to the UNESCO World Heritage List as an important cultural property, highlighting the immense significance the mountain has and continues to hold in Japanese culture. For many people, climbing the mountain is a rite of passage. And as per a well-known Japanese proverb, “A wise man climbs Mt. Fuji once, only a fool climbs it twice.”

This month, join Sakuraco in exploring the flavors of the region surrounding the mountain. From the rich green teas of Shizuoka, to the sweet fruits of Yamanashi.