What are Kyoho Grapes? 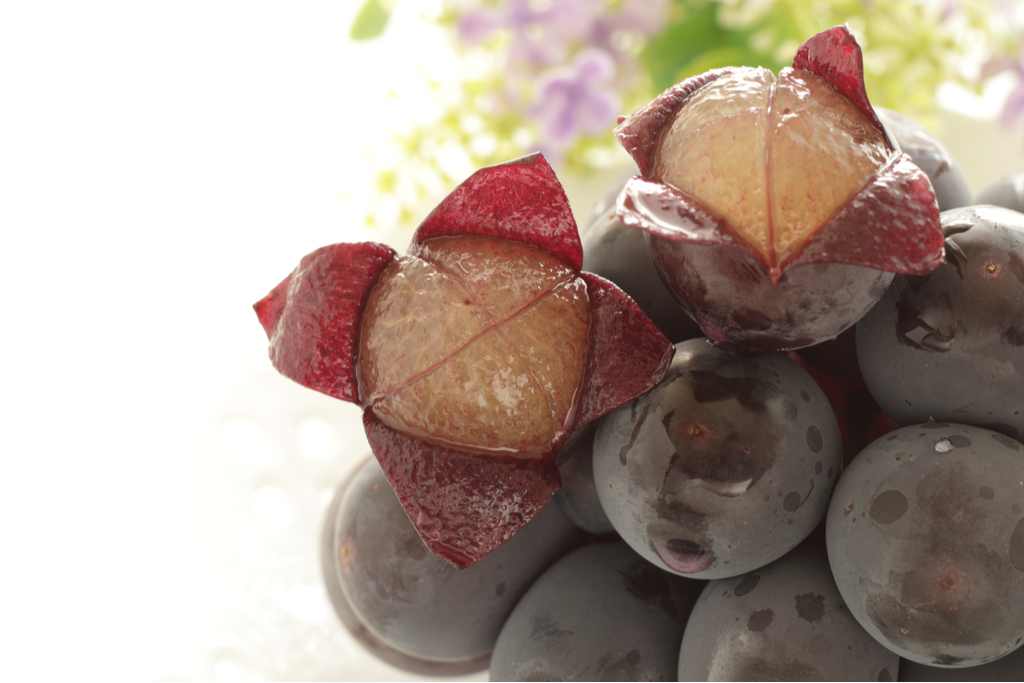 Meaning “large mountain grape” in Japanese, this variety is quite similar to the European concord grape and pops up in grocery stores across the country from mid-June to the end of September.

Every year, Japan goes into Kyoho grape pandemonium and the fruit appears in everything from parfaits, to puddings, to drinks. And like many fruits in Japan, these grapes don’t come cheap. The first batches of harvested grapes are the most prized, so prices are sky high at the beginning of the season but drop off to the more manageable price of about 5 dollars per bunch after about a month. Despite the sometimes luxury cost, Kyoho grapes have proven so popular that they can now be found in Japan, Taiwan, China, and California and the variety is actually the most cultivated type of grape based on land area.

The King of Grapes

Kyoho are a concord-like blend of grape variety that is particularly popular in East Asia. They are deep purple, almost black in color with a high sugar content and seeds. The skin, which is quite thick and has a bitter aftertaste, can easily be slipped off and discarded. As for the size, there is a reason that these grapes are called giant, with an average weight anywhere from 20-40 grams.

The biggest producer of grapes in Japan is the prefecture of Yamanashi. This region, located by Mt. Fuji, has the perfect blend of hot and cold temperatures that are ideal for creating super sweet grapes. It is partially due to these prized crops that the prefecture has the nickname “The Kingdom of Fruits”.

The history of this variety is quite recent, having been created by Yasushi Oinoue in 1942. For 5 years, he worked away to find the ideal hybridization and finally combined Ishiharawase (an American variety) and Centennial (a European variety) to create grapes that were impressively large as well as sweet.

However, it wasn’t until 1946 that the grapes were officially called “Kyoho Grapes”. Like popular American types, such as Delaware, Campbell and Concord, Kyoho grapes were cross-bred specifically to be eaten raw with a higher sugar content than wine grapes. The grapes proved to be an instant hit, especially when they were released in post-World War II Japan where sweet treats, even in fruit form, were hard to come by.

Much like other highly prized fruit varieties in Japan, the quality of Kyoho grapes is a result of strictly controlled cultivation standards as well as a quota for vineyards. In vineyards growing the variety, it is common to see a small cover placed over each individual bunch to shield them from the harsh rays of the sun. As well, any bunch with a weight over 450 grams is discarded as the dispersal of nutrients across too many grapes decreases the sugar content to below the ideal level. Any grapes that do not meet these strict standards could cause damage to the reputation of these highly sought after fruits, so the Japanese growers are very careful to always adhere to the highest standards.

Kyoho grapes have a beautifully rich and sweet flavor which lends itself well to a wide variety of desserts. Given that it is a summer fruit, one of the most popular confections is ice cream. Ranging from a simple treat purchased at a convenience store to an elaborate parfait, this Kyoho-flavored indulgence is the perfect way to cool down on a hot summer day.

While Western jellies were traditionally made with gelatin, Japanese jellies in contrast use agar. This plant-based thickening agent derived from seaweed was discovered in the mid-1650’s and soon became a staple in Japanese confectionery. Fruit jellies in particular are still popular in Japan with seasonal flavors such as Kyoho grapes making an appearance in supermarkets, bakeries, and as souvenirs for friends and family.

Seasonal flavors are a delightful part of Japanese food culture and many snack companies are more than happy to create limited versions incorporating highly sought after flavors. KitKat is especially famous for their wide variety of unique and regional flavors, so of course they also have a Kyoho grape version of their classic chocolate-covered wafer biscuits. To help maintain the exclusivity of this flavor, even when it is available year-round, Kyoho grape KitKats can only be purchased at specific retailers, such as the airport souvenir shops.

In recent years, many farms across Japan have started opening up their vineyards to tourists and allowed them to partake in fruit picking. However, instead of filling a basket or bag and bringing it home, the Japanese model is more often than not all-you-can-eat. As well, once you’ve eaten your fill, many farms have a huge selection of items featuring the star ingredient that you can enjoy there or buy as a souvenir.

Have you ever seen Kyoho grapes in your area of the world? How would you like to partake of this sweet and satisfying flavor? Let us know in the comments below!