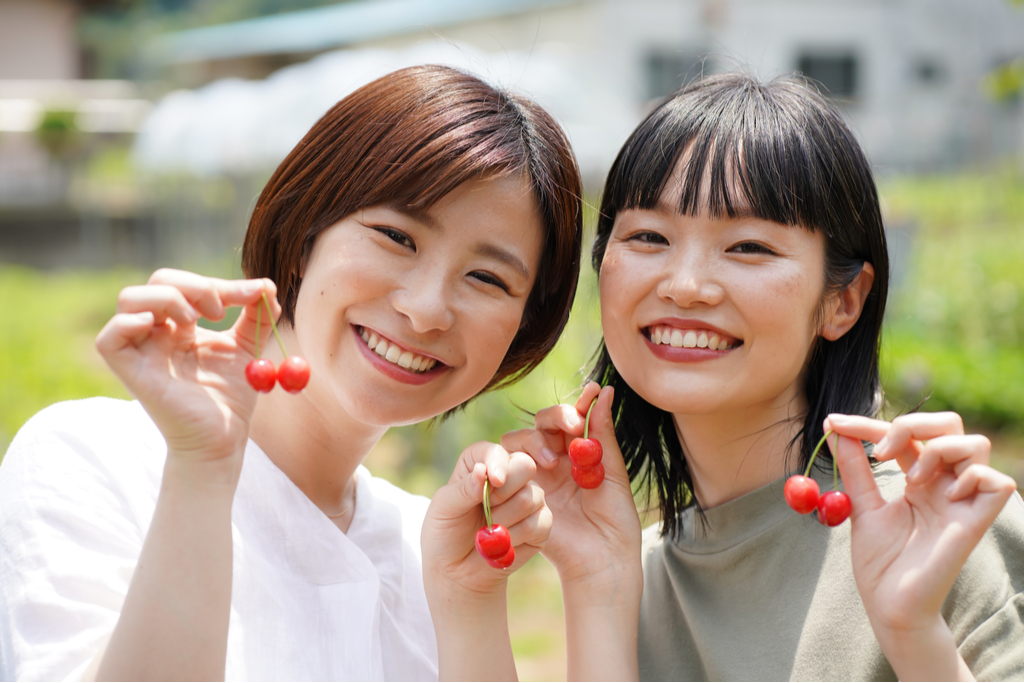 With a name meaning “mountain pear”, Yamanashi quite clearly has strong associations with fruit cultivation. The numerous valleys in the prefecture, combined with the extreme heat and cold of the seasons, makes for absolutely idyllic growing conditions.

Thanks to the widely different temperatures throughout the year, there are specific crops that thrive in certain seasons. Strawberries are grown in winter and spring, peaches and cherries in the summer, and pears and grapes in fall. Some of Yamanashi’s most famous fruits have long histories that can be traced back through writings by scholars and nobility, whereas others are more recent imports.

Yamanashi is the largest producer of peaches in Japan and they are particularly famous for their white peaches, known as “hakuto”.

Peaches have a long history in Japan having originally been brought over from China. There are folktales that feature the fruit stretching as far back as the 7th century as well as poems about the beauty of the blossoms. Interestingly, however, it wasn’t until the Edo Period (1603-1868) that there was any real interest in the fruit. This is largely due to the fact that the peaches at this time were quite small and astringent.

It was during the Meiji Period (1868-1912) that the peaches we know and love today were created. After much cross-breeding and tweaking, juicy and sweet peaches were finally created. Of course, they were initially luxury items, as were most fruits in Japanese culture, until well after the Second World War. Peaches are especially highly prized as gift fruits because of their very short availability, with some peach varieties only available for periods as short as 10 days.

Meaning “large mountain grape” in Japanese, this variety is quite similar to the European concord grape. They are large with a thick dark purple skin, which is bitter and traditionally peeled off, and a flesh with very high sugar content and low acidity. This makes kyoho grapes a popular choice for snacking, or even as dessert at the end of a meal. Grapes were first brought to Japan from Europe via the silk road through China around 700 CE, however this variety was actually only created in the 1930’s.

In summertime, when the grapes are in season, kyoho flavored sweets pop-up all across Japan. From parfaits, to puddings, to drinks, it’s a classic flavor on a hot day. Kyoho grapes have proven so popular in fact that they can now be found in Japan, Taiwan, China, and California and is actually the most cultivated type of grape based on land area.

Harvested in June, cherries are called the “jewel of fruits” in Japan. They were introduced to Japan through a German trader called Richard Gaertner in the Meiji Period but only finally took off when seedlings were brought over from America and France in 1876.

Cherries are especially prized due to their short growing season. The most popular variety of cherry was one developed in the prefecture of Yamagata in the early 20th century called sato-nishiki. Named after their cultivator Sato Eisuke, they are deliciously sweet and were the first cherries to have a long enough shelf life to ship across the country.

Although “ume” translates to “plum” in English, they are actually closer to apricots and have the longest recorded history of any fruits on this list. Plums in Japan are rarely eaten raw and are instead pickled or used to make plum wine called “umeshu”. Pickled plums (umeboshi) feature in many different Japanese dishes, the most famous of which is likely the onigiri rice ball where it is used as a filling. In fact, there are records of umeboshi being eaten as far back as the Nara Period (710-784 CE).

Otherwise known as Asian pears, and the fruit from which Yamanashi prefecture gets its name, this variety of the pear is actually spherical and appears closer to an apple than its European counterpart. Nashi have a long history in East Asia and are highly prized. Because their flesh is quite delicate and easily bruised, you will often see them wrapped in a protective padded layer.

This type of pear is typically eaten raw with the skin removed rather than cooked into pastries or preserves. This is because this type of pear has a higher water content and a more subtle flavor. Unlike some of the other fruits on the list, nashi actually have quite a long picking season in comparison from late August to late October.

Compared to other countries with a similar subtropical climate, fruits in Japan remain a luxury for many people. Especially those with short growing seasons like cherries and peaches. However, farms across Japan have in recent years opened up their operations and allowed tourists to take part in the activity of fruit picking.

For people living in cities, it’s a rare experience to be able to have all-you-can-eat fruit as well as to sample so many different varieties at once.

What fruit from this list would you like to try most? Have you ever been fruit picking? Let us know in the comments below.