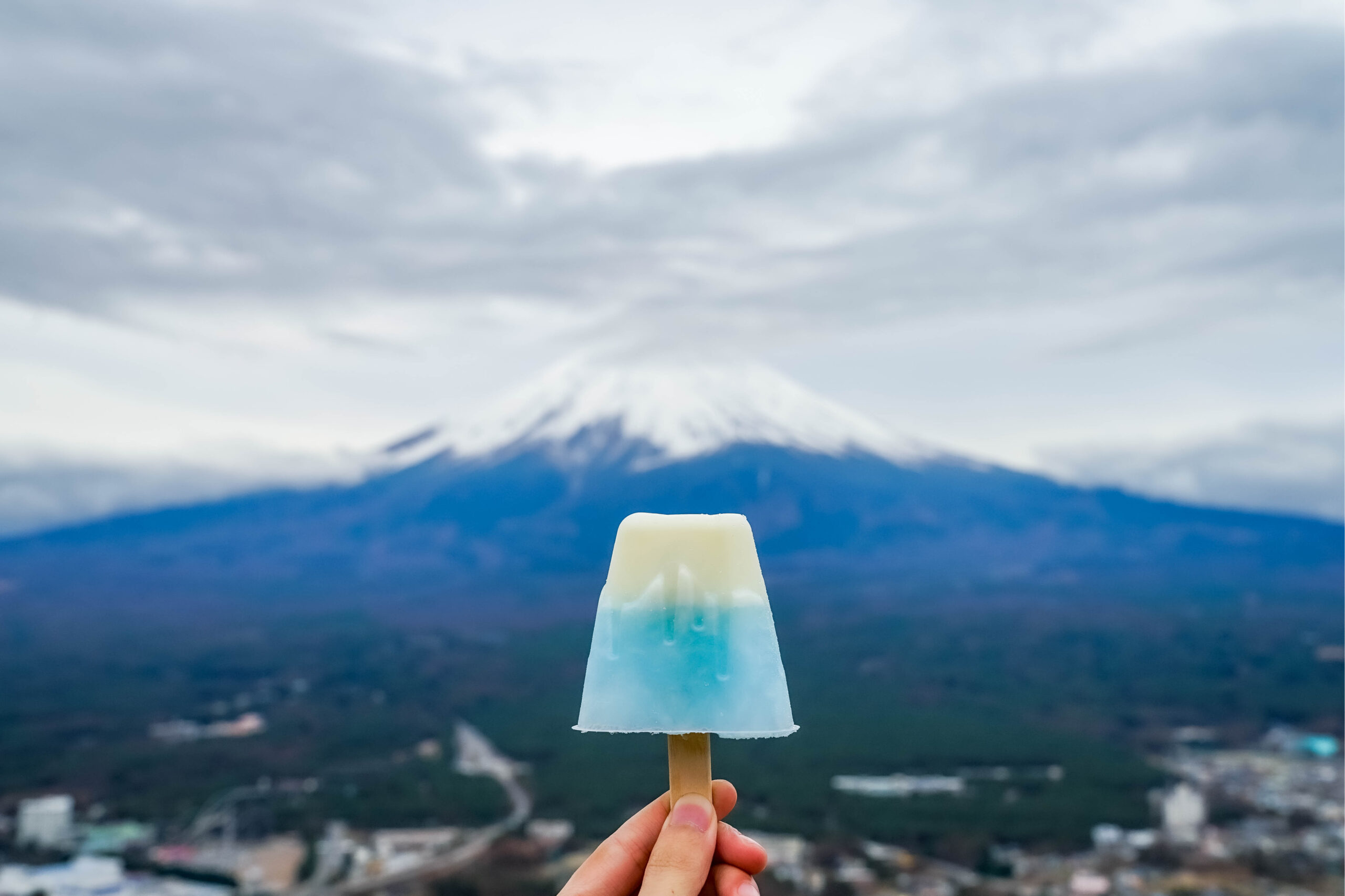 When people conjure up an image of Japan in their mind, Mount Fuji is right along with geisha, sushi, and shrines. Almost anyone, regardless of whether they have visited Japan, can instantly recognize the shape. Which is why so many restaurants and snack makers in Japan are constantly creating delicious things inspired by the volcano.

Released in 2019, this visually stunning jelly was specifically designed to give tourists an affordable souvenir option that was easy to take home. Composed of clear blue with opaque white, this jelly is made using water sourced from underneath the iconic mountain.

While jelly may have fallen out of favor as a dessert in some countries, in Japan, it shows no signs of slowing down. Jelly was first introduced in the 1650’s when agar was discovered. This thickening agent is made from seaweed, as opposed to the European tradition of aspic and gelatin, made using animal bones.

For those who may not be partial to the vibrant blue color, there are also traditional wagashi versions of jelly featuring the mountain. Made with natural dyes, such as mugwort, and red bean, these desserts are a more subtly flavored interpretation of the volcano.

Located in Fujikawaguchiko, Fujiko Shokupan is a recently opened bakery that has quickly drawn attention and fans for their delightful and fluffy Mt. Fuji bread. Baked in a trapezoid-shaped pan, the bread dough is colored with blue dye in order to produce the instantly recognizable shape of the mountain when sliced.

While the bread’s Instagrammability is a top selling point, it is also the use of local ingredients, such as Yamanashi wheat and rich Fujigane Kogen. Even the dye is made with the nearby specialty of Kyoho grapes, which help to produce the beautiful color as well as add some sweetness.

Tourists and locals alike can turn this whimsical bread into a fun gift by opting for a decorative box.

While melon bread is so named due to its resemblance to the crosshatched skin of the fruit, this Fuji-shaped version is turning that idea on its head. Baked into a volcano shape, and then dusted with icing sugar to imitate the snow-capped peak, these sweet breads are a playful and delicious nod to the impressive scale and silhouette of the mountain.

Adding to this already delicious-looking pastry is the beautifully delicate custard filling, perhaps a nod to the lava even though the volcano has been dormant for over 300 hundred years. Much like many of the foods on this list, these melonpan can only be purchased locally, making them an extra special moment of indulgence.

This dish is certainly a show-stopper with the rather unusually blue-colored curry. Served at the Lava Cafe, located a block north of the Fujisan World Heritage Center in Yamanashi, this dish quickly garnered a lot of attention on social media.

While making a Mt. Fuji-shaped pile of rice and adding curry is not a new creation, what is unique about Lava Cafe’s version is the blue color. It took the restaurant 6 months to perfect the recipe before it was introduced to the menu in 2018.

Crafted with both Japanese and foreign tourists in mind, there is even the option to order a Halal version, a rarity in Japanese cuisine.

A classic souvenir for anyone travelling through Yamanashi or Shizuoka (the two prefectures that border Mount Fuji), these cookies are as adorable as they are delicious. They are made with flour, cheese, and honey, for a rich, crumbly treat. The delicate color comes from natural dyes and flavorings, including strawberry and matcha. And the final touch of white icing is a node to the mountain’s snow capped peak.

The Next Fuji Food Craze?

Even after thousands of years, Mount Fuji continues to awe and enchant both locals and tourists with its majestic beauty. Therefore, it is only a matter of time before the next amazing Fuji-shaped food is unveiled. Which items on our list would you most like to try?

Let us know in the comments below.