What Is The Difference Between Manju and Mochi? 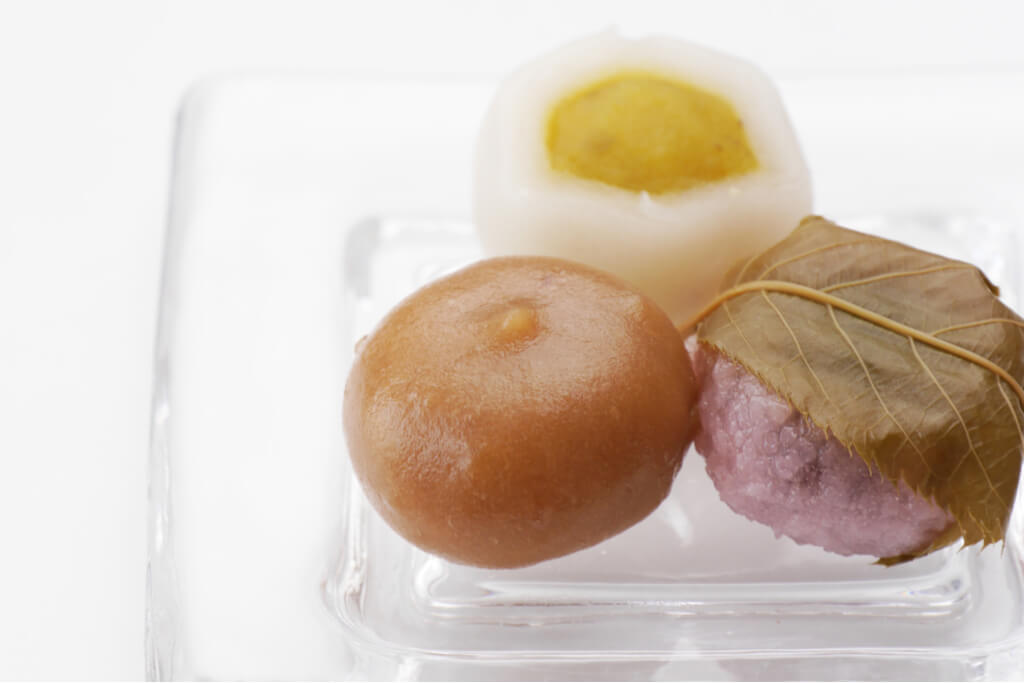 Manju (Japanese stuffed flour cakes) and mochi (Japanese rice cakes) are both kinds of traditional Japanese sweets, called wagashi. While at first glance, these wagashi may seem similar, they are actually quite different. Read on to learn about the differences between these two Japanese confections.

If you love Japanese sweets, you’re probably already familiar with mochi, as it is a major component of many Japanese sweets. Often translated into English as rice cake, mochi (餅, or もち) is made from glutinous rice flour and is a white paste with a soft sticky texture.

Traditionally, mochi is created by pounding glutinous rice into a paste. However, today, it is far easier to make by just mixing rice flour with water and cooking it. There are even kinds of mochi that can be cooked in the microwave.

Mochi was likely brought over from China, along with the glutinous rice used to make it, perhaps as early as the Jomon period. We have records showing that the pounded rice cakes were served as a New Year’s treat during Japan’s Heian era over 1000 years ago. At the time, mochi-like rice cakes were also used as an offering to the gods or in religious rituals. Since then, pounded rice cakes have become a staple of Japanese cuisine.

Mochi can be eaten plain, dipped in sweet soy sauce, or wrapped in nori. However, it can also be used as a single component in more complex wagashi.

One of the most popular mochi-based sweets is daifuku: mochi balls filled with a paste made with azuki beans (red beans) called anko and rolled in white rice powder. Daifuku are usually filled with anko paste, but can also be filled with whipped cream and fruit. In the winter months, when strawberries are in season, strawberry daifuku are extremely popular.

You may also be familiar with mochi ice cream, made of balls of ice cream wrapped in mochi. This frozen treat has become famous internationally. However, in Japan, this ice cream is also considered a kind of daifuku (stuffed mochi), called yukimi daifuku (snow-viewing daifuku).

There are countless other types of mochi among wagashi. Some of the most well-known include mochi dango (balls of mochi on a stick, served with sweet toppings), zenzai (red bean soup with chunks of mochi), and nama yatsuhashi (thin squares of mochi folded around red bean paste, a specialty of Kyoto).

However, in Japan these buns were filled with red sweet red bean paste (anko) instead. In Japan at the time, Buddhism was the main religion, and it prohibited the consumption of meat. So, red bean paste or vegetables were substituted for the usual meat filling, making them into the now familiar manju.

At first glance, manju and mochi seem very similar, as they both have a round shape and are both usually filled with red bean paste. However, the similarities end there. Manju (饅頭, まんじゅう) are typically made with wheat flour or buckwheat flour.

Manju come in many varieties as well. The most common types include:

Mochi or Manju? Or Mochi-Manju?

Mochi and manju are two similar, but very different types of sweets. Mochi is often used more like dough, as a component of more complex sweets, while manju is a finished product all on its own. Also, mochi is rice flour-based, while manju is usually made with an outer shell of wheat or buckwheat flour.

The difference between the two types of sweets is sometimes blurred as some special types of manju, like nama-fu (wheat gluten) manju, use dough made from a mix of glutinous rice flour and wheat flour as the outer coating, instead of wheat flour. Nama-fu manju are steamed like normal manju, but the outer layer has a soft, chewy texture similar to that of mochi.

Another sweet which blurs the lines between mochi and manju are the maple leaf-shaped “Raw” momiji manju. These confections have an exterior made with mochi paste, making them even more similar to daifuku, if it weren’t for their special maple-leaf shape.

Despite their differences, if you love Japanese sweets as much as we do, you’re sure to find them both delicious. Whether it’s mochi or manju, they go especially well with a cup of green tea.