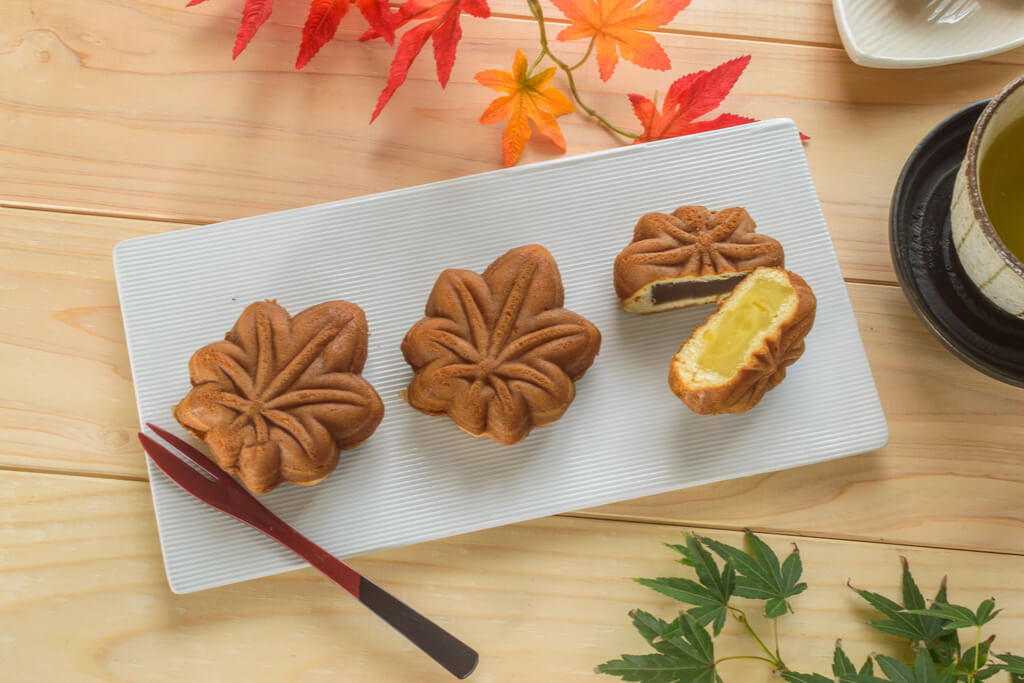 Miyajima, in Hiroshima Prefecture, is one of the most beautiful places in Japan. The island is famous for its “floating” torii gate (a gate found at Shinto shrines) and wild deer population. It’s also famous for its specialty sweet: momiji manju (a Japanese maple leaf-shaped pastry).

These traditional Japanese sweets are a local specialty which were developed on the island itself. With red bean filling, they are in the same family as snacks like taiyaki or dorayaki. However, with a cake-like texture and an adorable leaf design, momiji manju are a must-try if you visit Hiroshima.

What Are Momiji Manju?

Let’s first look at the name of this sweet, momiji manju. Momiji means maple leaf in Japanese, and manju are steamed buns filled with red bean paste. Manju are both Japanese wagashi (a traditional Japanese sweet) and one of the most popular Japanese desserts. As the name suggests, momiji manju are maple leaf-shaped versions of regular manju.

However, these sweets differ from regular manju in more than just design. Most manju are steamed, giving them an outer texture similar to that of a Chinese steamed bun. But this kind is baked in a maple leaf-shaped iron mold, giving the sweet its classic maple leaf design.

You don’t have to travel all the way to Miyajima to try momiji manju. Sakuraco sends many specialty Japanese sweets from different prefectures straight to you.

Momiji manju are also made using castella-like cake batter, containing eggs, wheat flour, sugar, milk, and honey. This makes the outer shell fluffier and thicker than that of regular manju.

Over the years, many variations of this sweet have been developed. While momiji manju traditionally contain koshi-an (a sweet, pureed bean paste), they have many different fillings today. Some of the more traditional fillings are tsubu-an (chunky sweet bean paste), white bean paste, bean paste mixed with chestnuts, sweet potato paste, and maple-flavored paste.

However, there are also modern flavors, like chocolate, matcha cream, cream cheese, and custard cream. Some other delicious variations include deep-fried, black, raw (made with a mochi-like flour dough), and a version dipped in chocolate.

With so many types, no matter your preferences, you’re sure to find a type to suit your taste.

Momiji manju were created in 1907 during the Meiji era by the wagashi maker Takatsu Tsunesuke. Tsunesuke was in charge of supplying wagashi to a ryokan (Japanese inn)  on Miyajima Island called Iwaso.

This inn was famous for its lovely views of Momiji-dani (maple leaf valley), a valley with over one thousand maple trees. Every fall, the valley is filled with beautiful, fiery-colored leaves, making it a popular spot for momijigari (autumn leaf viewing). The inn was so famous that both Japanese and Korean royalty would visit to admire the fall colors.

However, the mistress of Eiko, another ryokan, wanted a special kind of wagashi unique to her inn. It would both welcome esteemed guests while also celebrating the beauty of the area’s fall foliage, so Tsunesuke was asked to invent a new kind of sweet.

He actually invented leaf-shaped molds and, after some trial and error, produced the now famous momiji manju. The sweets were an instant hit and were eventually produced all over Hiroshima. Today, they are considered a symbol of the prefecture.

You can still try Tsunesuke’s original creation at the shop, Takatsudo, opened by Tsunesuke’s descendants. The shop, however, was moved to the mainland and is currently located in Miyajimaguchi.

Momiji manju were initially cooked four at a time in a mold that needed to be hand-pressed and rotated. However, in the 1960s, in Hiroshima city, the Momiji Manju Making Machine was developed.

This machine automatically rotates the molds and can produce over 2500 pieces per hour. These machines are used for mass-producing momiji manju for large souvenir boxes. However, there are still many places in Hiroshima, especially on the island of Miyajima, that still do it by hand. There is even a shop where you can experience making momiji manju yourself.

Today, you can purchase momiji manju all over Hiroshima. They are a popular souvenir, so boxes of them can be found in gift shops at any major railway station or airport in the prefecture. These maple leaf-shaped buns are so popular that they even have their own Japanese Kit Kat flavor.

Plus, the manju are now produced in more shapes than just maple leaves. There are even special Sanrio character editions!

The main road of Miyajima Island, which leads to the famous Itsukushima Shrine, is lined with stores that produce the maple-shaped sweets. Any of these shops will serve them fresh and piping hot. Just be careful a hungry deer doesn’t take a bite before you do!