What is Mochi Dango? 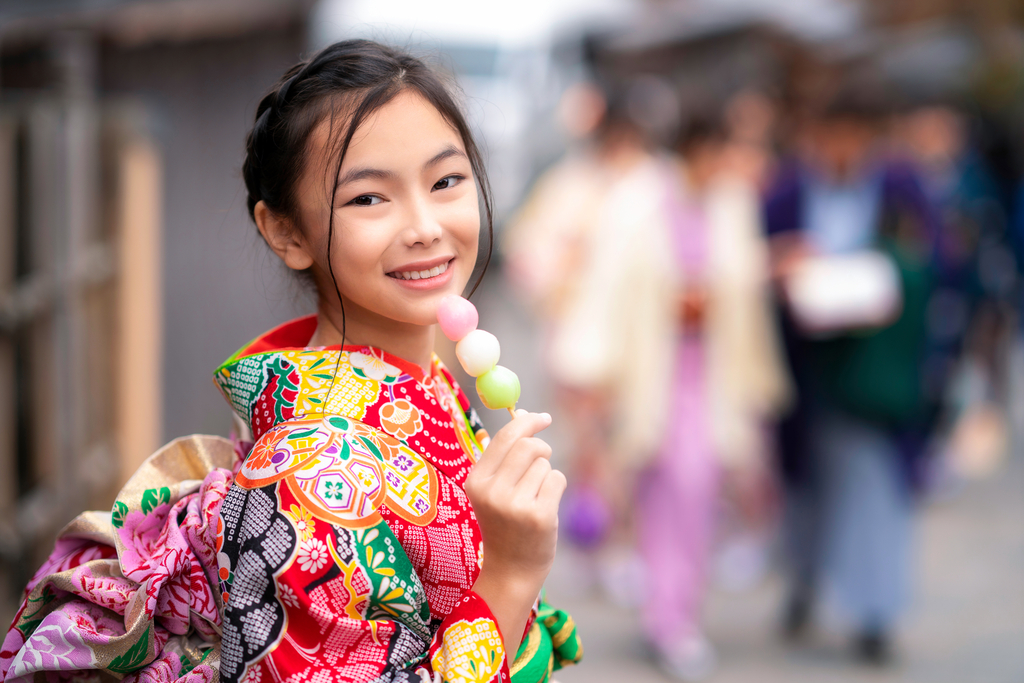 Exploring A Favorite Japanese Snack on a Stick!

A common street food in Japan, dango are Japanese mochi dumplings that are usually eaten in groups of 3-5 off a bamboo skewer. The rice flour used in them is made from a combination of uruchi rice and glutinous rice flours to create a super chewy texture. Dango can be either sweet or savory, or sometimes a mix of both, and flavors can be added while the rice dough is being kneaded or as a sauce on top once they are cooked.

Although they appear quite similar, traditionally made mochi and dango are slightly different Japanese rice cakes. While mochi is made from steamed and pounded mochigome (sweet rice), dango is made by adding water to glutinous rice flour to create a dough. This rice dough is then either steamed or grilled. For more info on how mochi is made, check out our article: Everything You Need to Know About Mochitsuki.

There is a popular Japanese folktale called Momotaro (‘Peach Boy’) about a boy born from a peach, who goes on a quest to save his village from terrible trolls. Before setting off on his adventure, his mother gives him kibi dango (sweet rice dumplings) as food for the journey. Along the way, he befriends a dog, a bird, and a monkey, partially by sharing his snacks. The kibi dango gives the group strength and they are able to defeat their enemy. They even discover a treasure trove of gold and jewels which they bring back and share with everyone.

Start your journey through the world of traditional Japanese sweets and snacks with a Sakuraco box – a teatime experience sent straight from Japan to your door.

Either pronounced mitarashi or midarashi depending on which region of Japan someone is from, this type of dango is the most common. It consists of 4 dango balls on a skewer that are steamed and sometimes grilled, before being coated in a thick soy sauce and sugar based sauce that is both salty and sweet. This type of dango can be found at any convenience store or supermarket, but is also a favorite for festivals.

For the full history of this classic sweet, check out our article Mitarashi Dango: A Kyoto Classic.

Sanshoku means “three colors”, which makes sense because this type of dango consists of 3 balls on a skewer in pink, white, and green. The other name is hanami or “flower viewing” which refers specifically to the cherry blossom season. These colors are often seen in traditional Japanese sweets, or wagashi, and carry a special meaning:

These colors are most commonly seen around Hina Matsuri (‘Girls’ Day’ on March 3rd) but tri-color dango can be found in shops all year round. Nowadays, these colors are achieved mostly through dyes, but originally the dango dough got its color from natural ingredients. Red shiso for pink, and mugwort for green.

If you know anything about Japanese sweets, it’s that azuki, red bean paste, is a super popular flavor. So it should come as no surprise that there is red bean dango. The red bean paste is quite thick, so it’s slathered only on one side of the skewered dango and can be a bit of a mess to eat if you’re not careful!

Kinako is a fine powder made from roasted soybeans and sometimes mixed with sugar. Kinako dango are simply dango rolled in kinako, which has a delicate nutty flavor. Like azukian dango, it’s not the easiest food to enjoy gracefully, and the number one rule is: never inhale while taking a bite!

The vibrant green of this type of dango is certainly eye-catching! Topped with mashed edamame, this variation may not be everyone’s first choice, but it’s certainly a fun option for the adventurous eater.

This version of dango is slightly different from the others for 2 reasons: it’s not on a skewer and it has a filling. Goma, or sesame, is a very popular flavor in Japan but goma dango is actually a Chinese sweet. This is why this type of dessert is not often seen in the wagashi section of a supermarket, but rather, can be found at most Chinese restaurants.

A local specialty of Okayama prefecture, in southwestern mainland Japan, kibi dango are sweetened millet and rice flour dumplings that are eaten individually. The treats were initially created as an offering to the gods at Kibitsu Shrine, but eventually were sold to locals, then tourists, starting in the 19th century. It was an enterprising merchant who linked the local specialty to the Momotaro folktale, and now it’s common to find kibi dango souvenirs featuring characters from the children’s story on the packaging. Although modern kibi dango contain little to no millet flour nowadays, the name stuck.

Hailing from Kumamoto prefecture, located on the southern part of the mainland of Honshu, ikinari dango are a local favorite. They consist of a thick slice of yellow sweet potato, wrapped in a layer of mochi dough, and coated in red bean paste. The name roughly translates to “quickly made dango” since they only require three ingredients and no fancy presentation.

In 2020, Japanese entertainer Naomi Watanabe released her music video parody of “Rain on Me,” where she played the role of Lady Gaga, along with her fellow comedian Yuriyan Retriever who played the role of Ariana Grande. While the original music video has rain falling on the singers, the parody features skewers of dango, for a scenario that is as terrifying as it is absurd. One skewer is even impaled into Watanabe’s thigh at the start of the video, which she removes, eats, and then carries on with the routine.

The video was praised for its high production value (likely due to Watanabe getting permission from Lady Gaga’s production team to copy the set and style as closely as possible) and now boasts over 24 million views.

Modern Flavors for a Classic Treat

While most wagashi-ya (Japanese sweet shops) stick to the traditional dango flavors of red bean, mitarashi, and sesame, in recent years some confectionery makers have gotten more creative. A few years ago, Yugumo Dango in Aichi prefecture stirred up a lot of buzz with their chilled watermelon-flavored dango – coated in brown and green chocolate and featuring brightly colored red balls of dango. The sweets proved so popular, they quickly sold out and have been a recurring summer-limited release ever since.

With the success of Yugumo Dango, it’s not hard to imagine that other sweets shops will soon jump on the bandwagon with their own creative color and flavor combinations.

Time to Pick a Dango!

From humble beginnings as a simple snack or street food, to exclusive limited-edition flavors, dango has had quite a culinary journey in Japanese history.

Now that you’ve gotten to know more about this fun Japanese treat and some of the varieties, which flavor would you like to try? Classic mitarashi, adventurous zunda, or instagrammable watermelon? Let us know in the comments below!