Types of Daifuku You Need To Try in Japan 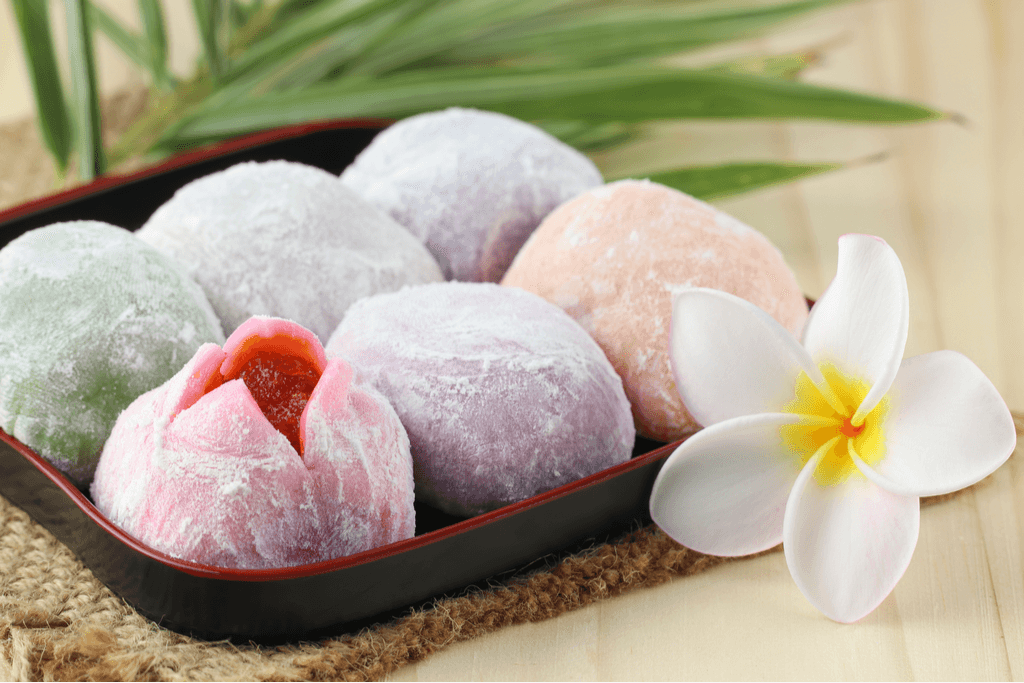 Daifuku (stuffed rice cake) is one of Japan’s most popular traditional snacks and comes in a variety of colors and flavors. Today, let’s talk about all the different types of daifuku out there for you to try. There’s definitely a daifuku for everyone to enjoy!

These days, daifuku comes in all sorts of colors and fillings, but the recipe remains almost the same. Generally, what changes is the filling, with some makers opting for other tasty fillings instead of the usual azuki bean paste (red bean paste). They are usually 3-4 cm in diameter, but there are some shops that sell daifuku the size of one’s palm. Daifuku can also be baked, grilled, or eaten in soups.

Uzura mochi (mochi shaped like a quail) is said to be the predecessor of daifuku. These wagashi originated some time during the early Edo period (1603-1867), and in 1875, a widow in Koishikawa, Edo (modern-day Tokyo), miniaturized the snacks and added sugar to the red bean paste.

It became known as habotai mochi (belly thick rice cake) because of how the filling expanded inside the rice cake. The name later changed to daifuku mochi (big belly rice cake) before changing again. This time the name was a play on the word “fuku,” which can mean both ‘belly’ and ‘luck’.

Using the kanji (Chinese writing) for luck, the new daifuku mochi means “great luck rice cake” and was known to bring good fortune. As a result, daifuku is often associated with Japanese New Year celebrations and other spring festivals.

Fun fact: Sweetened red bean paste wasn’t created until around the end of the 18th century. Due to sugar being a luxury item at the time, daifuku mochi with salted red bean filling was widely sold during the Meiji and Taisho periods (1868~1926) instead.

Now, let’s dive into all the tasty types of daifuku here in Japan!

Need some tea or some other snacks to eat your daifuku with? Check out Sakuraco! Sakuraco sends traditional Japanese teas, snacks, sweets, and even kitchenware right to your door straight from local Japanese makers!

This type of mochi is the original daifuku. White mochi is filled with anko. Food coloring can also be used to change the color of the mochi, but not the taste. The red bean paste can either have a fine texture or a coarse texture depending on the maker.

Perhaps one of the most iconic types of daifuku, this one uses whole strawberries (ichigo) covered in a thin layer of red bean paste as its filling. It’s perfect during Japan’s strawberry season. Other variations might use red colored mochi, white bean paste (instead of red bean), or even cream.

Since it uses fresh fruit, you should eat it as soon as possible or the strawberries will gradually drain, and the bean paste will become watery, leaking out from the rice cake shell.

The origin of ichigo daifuku is a hot debate topic, but all can agree it was made during the 1980s.

This daifuku earned its name thanks to the mame (beans) – red beans or soybeans – that are mixed in with the mochi or red bean filling, adding a slight texture to the rice cake.

This version of daifuku uses mochi with yomogi (Japanese mugwort leaves) kneaded into the mochi. As a result, the mochi turns green. The vibrancy of the green depends on how much yomogi is used during the mochi-making process.

It is also called kusa daifuku (herb daifuku) in some parts of Japan.

This daifuku uses unsweetened red bean filling. Salt was once used as seasoning instead of sugar, but these days, both sugar and salt are used at a perfect amount.

There is also a type called shiozu daifuku that combines shio and mame daifuku.

This daifuku is made by mixing millet (a small, hard grain) with the mochi.

Japanese plums (ume) are coated with red bean paste before they are wrapped with mochi. The contrast between the sweet mochi and the tangy ume creates a good balance between the two flavors. Ume daifuku can only be enjoyed during the late winter and early spring during ume season.

Coffee Daifuku is made from mochi stuffed with a creamy coffee-flavored bean paste. Some variations even include a filling made with fresh cream, sometimes called Café au lait Daifuku. Other types mix the mochi with coffee, causing the rice cake to take on a coffee-like brown color and a coffee taste and aroma.

This daifuku blends the old and the new together, combining this traditional Japanese treat with the more modern Japanese pudding. The filling for this daifuku is a creamy custard that contains some caramel, although some variations do include the red bean paste filling or use the caramel as a drizzle. The combination is said to taste like crème caramel.

One of the other dessert-inspired types of daifuku, this variation uses tiramisu cream combined with coffee-flavored mochi.

The word “nanjakora” expresses disbelief, like a rough way of saying, “What is this?!”. This daifuku boasts a strange combination of fillings, combining chestnuts, strawberries, and cream cheese inside the filling. It is a rare version of daifuku found in Miyazaki City in the Kyushu region.

Using a sweet matcha (Japanese green tea) flavored cream as the filling, this daifuku is best served with matcha powder sprinkled on top.

Although not really its own type of daifuku, the confections are sometimes toasted before consumption due mochi’s freshness period. Mochi expires quickly and hardens as it does so. Therefore, people tend to toast mochi to freshen up the rice cake, resulting in a softer and stickier daifuku. It’s best to use a fork when eating daifuku this way.

Yukimi Daifuku, or mochi ice cream, isn’t technically a daifuku. Rather, it’s a popular brand of mochi ice cream sold by Lotte in Japan. It is made with patented technology to keep the mochi soft even at freezing temperature. It involves wrapping a ball of ice milk with a layer of mochi and then dipping it in coconut milk.

There are delicious flavors like chocolate, strawberry, and green tea ice cream. The word “yukimi” refers to watching the snow fall, a popular pastime in Japan, and is a parody of tsukimi daifuku which are eaten while watching the moon.

Have you ever eaten daifuku? What was your favorite type? Tell us in the comments below!