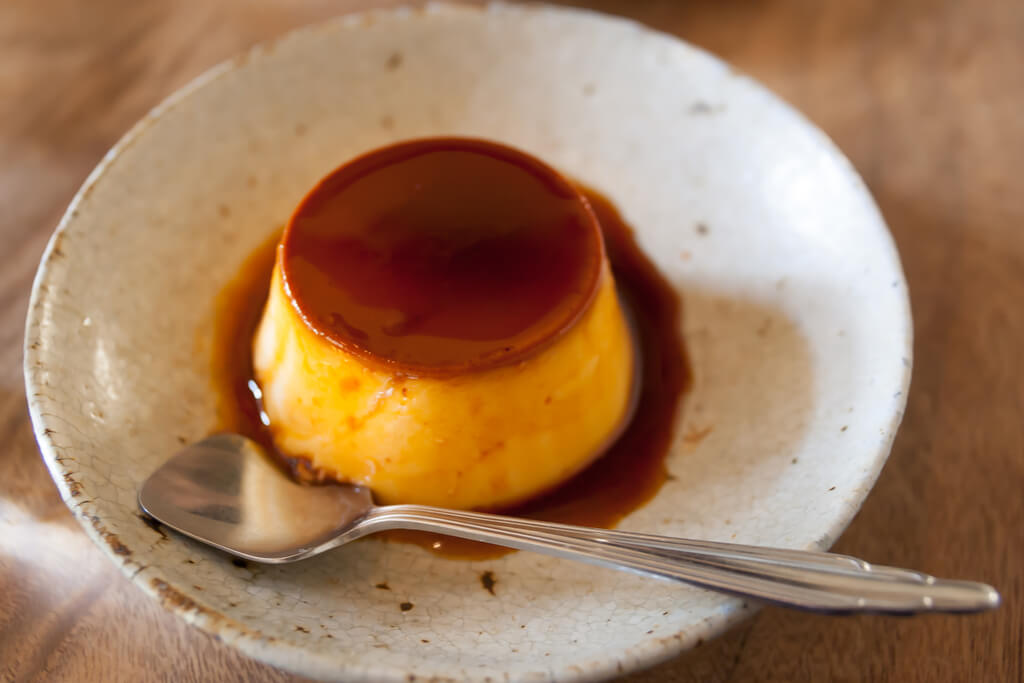 Japanese pudding, known as Purin, is more than just a delicious custard pudding, known for its smooth texture and rich, creamy flavor. The extent of this much-loved Japanese dessert even stretches to Sanrio characters, Japanese Kit Kats, and the cutest Pokémon!

Purin combines a slightly bitter caramel sauce with a sweet custard pudding (its consistency ranges from firm to a jelly-like wobble). Best served cold, purin is reminiscent of a crème caramel or flan, and has its origins in the Meiji era. However, it was only with the arrival of pre-mixed powders in the 1960s, together with a boom in milk consumption, that purin became a more accessible dessert.

Pre-mixed powders were followed by ready-made purin, which included the launch of Glico’s rich, flavorful Pucchin Pudding in 1972. Pucchin Pudding, which remains one of the top-selling brands of purin, is known for its clever packaging and the distinctive sound it makes when, after flicking back a small tab, the pudding is released from its container. This, says Glico on its website, is just one of the reasons the caramel custard pudding was, and remains, so popular almost 50 years later. In 2020, McDonalds even released a limited-edition Pucchin Pudding McShake in collaboration with the brand.

If you’re keen to try and make purin at home, there are many easy-to-follow recipes available online. In general, purin is made using a combination of milk, eggs, sugar, and vanilla. There is more than one way in which you can make this custard dessert. You can opt for the popular oven-baked version (yaki-purin), which requires you to fill pudding molds with mixture and make use of a water bath (also known as a bain-marie). Similarly, you can choose to steam the mixture (mushi-purin) in a water bath on the stove. Alternatively, you can make your purin using gelatin, as found in Glico’s Pucchin Pudding, for an extra jiggly, jelly-like finish.

Interested in experiencing Japanese sweets for yourself? Sakuraco is sending curated boxes full of Japanese snacks and sweets like mochi all over the world!

If you find yourself in Japan, there are numerous different types of ready-made purin for you to try, many of which are available in local convenience stores, including Glico’s Pucchin Pudding and Morigana’s Yaki Pudding, a baked version known for its flavorful crust.

The award-winning Toraku Kobe Pudding, made using a combination of eggs, cream, and citrus liqueur, is another must, and an ideal souvenir to pick up when visiting Kobe. It even inspired a special Kobe Pudding KitKat flavor. Purin found in convenience stores often comes with tasty additional toppings and layers, from whipped cream to sponge cake.

There are also countless, exciting variations of this Japanese pudding available in specialty cafés across the country, many of which are in Tokyo, and have become renowned for the purin they have on offer. For example, the purin pots from Happy Pudding Mahakala in Nakameguro make use of only the best eggs from a farm in the Hyogo Prefecture. Toyonchi-no-Tamago in Shimokitazawa serves its signature smooth purin in a fun egg-shaped container, a nod to its focus on fresh farm eggs. At Patisserie Français Quatre, the whipped cream-topped purin is served in an actual egg shell and presented in an egg carton.

At Colombin, you’ll find a variation of the traditional caramel sauce base in the confectionary’s Harajuku Honey Pudding, which is packaged in a recyclable WECK jar that you can reuse, and topped with honey sourced from beehives in Harajuku itself. Speciality store Asakusa Silk Pudding has a wide range of pudding flavors and variations on offer, including Premium Silk (made using milk and cream from Hokkaido), Green Tea, Coffee, Strawberry, Melon, Cheese, Chocolate, and Black Sesame. The list of specialty pudding stores and cafés creating delicious purin varieties really is endless.

Purin’s reach extends far beyond the puddings found in cafés and convenience stores, from appearances in anime and the Japanese name (‘Purin’) for the adorably round Jigglypuff Pokémon to treats like Kabaya’s Petit Pudding chocolates, which are shaped like mini caramel custard puddings. There is also a limited-edition KitKat Pudding Flavor, now available in a 12-piece mini pack.

Pompompurin, the much-loved golden retriever character created by Sanrio in 1996, is known for his custard-hued coat and caramel-like brown beret, not to mention his love of his Mom’s caramel puddings. His popularity has resulted in the availability of a range of fun purin-inspired collectibles and sweets, from Pompompurin pudding squishies to Furuta’s Pompompurin pudding-shaped gummy candies.

You can even visit a Pompompurin café when you’re next in Tokyo. The menu features a variety of Pompompurin-inspired sweet and savory dishes, including tasty purin, served in a round container topped with a cute chocolate beret lid, purin parfait, and custard pudding lattes.

Whether you love the idea of purin in different flavor combinations, finished with exciting toppings, or prefer to simply enjoy it the traditional way, the choices when it comes to this Japanese pudding are seemingly limitless. What is your favorite thing about purin? Let us know in the comments!