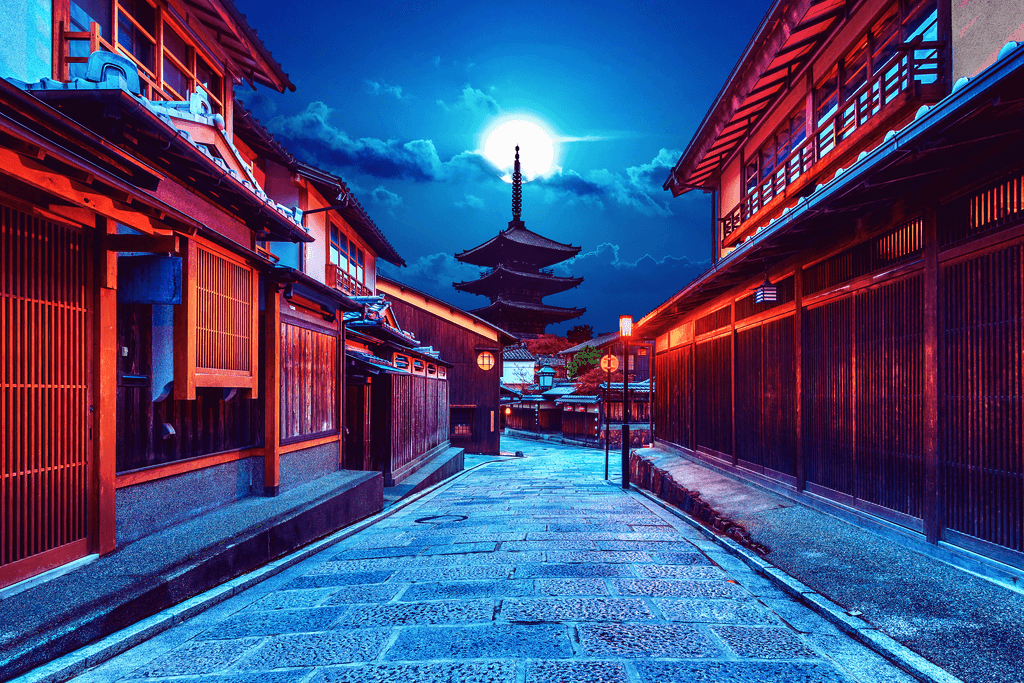 Every year, in the old Japanese capital of Kyoto, they celebrate the Moon-Viewing Festival, also known as tsukimi. Though Kyoto is very much a modern place, it has retained a great amount of its pastoral charm.  This land contains numerous Buddhist temples and Shinto shrines, wooden dwellings, and craftsmen and performers with a strong dedication to their craft.

But how would all these beautiful places, and these talented people prepare for tsukimi season? What else can you experience in Kyoto during that time?

Tsukimi (moon-viewing) season brings forth the Moon Festival.  Typically, it takes place around the middle of the eighth lunar month when the moon is at its peak luminosity.  While this celebration dates back to the Nara Period (710-794), it didn’t come to fruition until the Heian Period (794-1185).

The Heian Period saw Japan develop its own culture, especially in literature, so the moon festival often includes poetry. Many poetry subjects touch on the moon’s reflection, its roundness, and many other aspects of its beauty.  There is also plenty of music and plenty of sake at these celebrations as well.  In addition, they also eat rice dumplings called tsukimi dango.

Tsukimi season has birthed many mythological figures as well. While people in the West see a “Man on the Moon”, Japanese people see a rabbit pounding mochi rice cakes. There are a couple of reasons for this.

One is an old Buddhist fable that teaches the reward of kindness, while another uses artful wordplay. The Japanese word for the tsukimi harvest moon, mochizuki, is the same as the word for “pounding mochi”. Because of this, many pastries and other mochi foods feature rabbits.

However, the most important aspect of the Moon Festival is giving thanks for the mid-autumn harvest. People make offerings of tsukimi dango and pampas grass while holding their moon-viewing parties. But what other kinds of people get ready for this glorious occasion?

Kyoto, the traditional crown jewel it is, is home to many talented shokunin (artisans). Most of these shokunin have been working on their craft for many generations, their legendary talents passing down the family line.  They usually work out of wooden row houses, making the same thing many times until they perfect it.

Isao Sawahara of Amesho Sawahara is one of these shokunin, and he specializes in making hard candy by hand.

Big candy producers use large, low-temp vacuums to cook, while Sawahara and his artisan colleagues use open flame-heated copper pots to make their treats.  Because of this method, these traditional hard candy flavors are much more profound and rich than their mass-produced counterparts.

Once the syrup is ready, he pours it onto a separate tray and folds it into shape as it cools.  Depending on the number of flavors and even the design, he may do this multiple times.   Once the design is complete, he chops it up into little pieces.

This year, he made a batch exclusively for the Kyoto Moon Festival.  They feature six classic Japanese flavors: brown sugar, Japanese mint, matcha, shiso (perilla), ginger, and plum.  All of these flavors together, made with expert care, are sure to make this tsukimi extra special.

Nearby in a prestigious teahouse, an entertainer mystifies a small, exclusive audience. She wears an ornate hikizuri kimono while dancing with a fan in her hand. Another, more subdued woman backs her up with expert shamisen music.   The dancer’s makeup is as white as the full moon shining down upon the teahouse.

They are geisha, traditional Japanese performing artists. While they usually perform only for wealthy patrons, people of all backgrounds can enjoy their performances on special occasions. Geisha and their maiko apprentices are skilled in dance, music, and the art of conversation.

It takes five to six years of intensive training to become a geisha. On top of the training, they also have to live at the school, unlike other students their age.  These women are very talented, and respected, and are not to be disturbed during or after their performances.  When in the presence of a geisha, simply enjoy their performance, and keep the memory close to your heart.

Kyoto’s seaside scenery is beautiful, during the moon festival and all year round.  Notable places include the Ine Fishing Village, the Amanohashidate sandbar, and Gyotango.  They starkly contrast with Kyoto’s quintessential images of temples and shrines, with rich history abound.

Ine Fishing Village, which is way up in northern Kyoto’s Ine Bay, is a legendary and charming place.  Its funaya, or wooden fishing houses, is a beloved attraction reminiscent of Venice, Italy. The area is small but has a thriving commercial and tourism industry.  Many movie studios use this lovely town as a backdrop for feature films.

Not too far from the village is the aforementioned Amanohashidate sandbar.  Its name translates to “bridge to heaven” because the sandbar resembles a bridge that connects the earth to the sky.  It’s three kilometers long and lined with pine trees, with plenty of opportunity to dip in the moonlit beach.

Finally, there is Kyotango, a beautiful place with waterfalls, coastal vistas, and a 300-year-old silk-making industry. It’s popular with tourists in the spring and summer for its cherry blossoms and beaches.  In autumn, Kumihama’s onsen offers a natural experience with its naturally-sourced water.

The Kyoto Moon Festival is unquestionably one of the most beautiful moon-viewing events in Japan.  Even if you can’t see the rabbit on the moon itself you can still enjoy all the traditional splendor that the Kyoto region has to offer during this time. Locals and tourists alike flock to Kyoto to view the mid-autumn moon and partake in its festivities.

Recently, Sakuraco released a box that featured the Kyoto Moon Festival. To enjoy authentic Japanese experiences, why not consider subscribing?