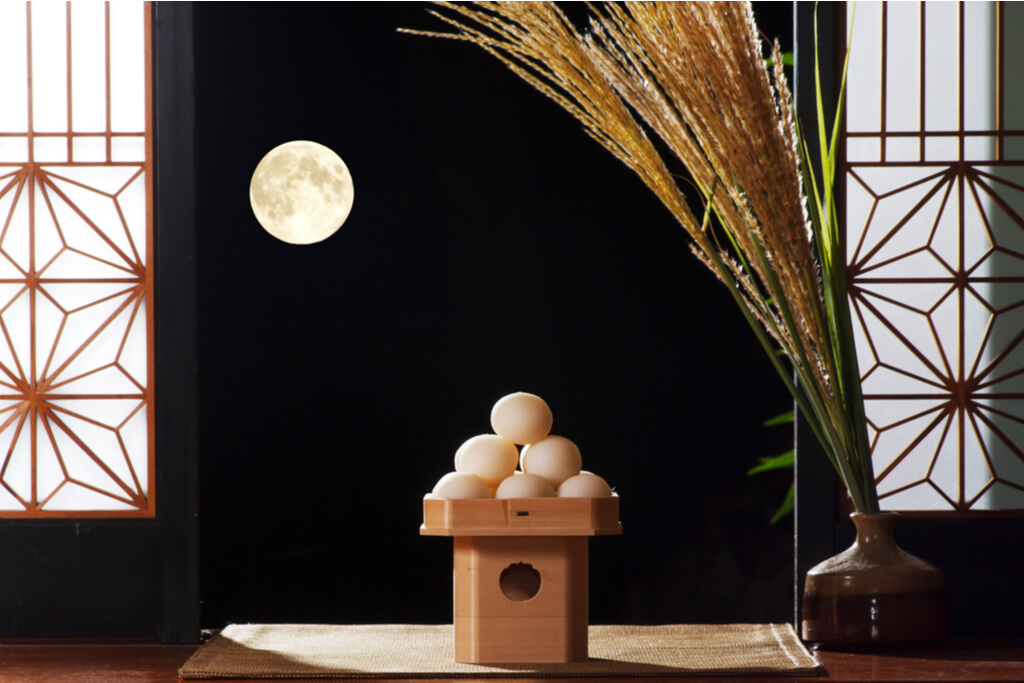 Japan’s Love of the Moon

There is much to be said in literature about hanami or ‘flower viewing’ in traditional Japanese culture. Particularly around cherry blossom time, when locals and tourists alike gather around friends to have a picnic under a sky of budding pink flowers. But do you know about o-tsukimi or ‘moon viewing’? You may know it from Japanese garden moon viewings in your home area.

Especially around summertime, when the days are hot and humid but the nights are a perfect temperature, traditional Japanese culture dictates that a moon viewing festival is in the cards.

Let’s get a little insight into why Japanese people celebrate the full moon, how they celebrate it, and how you can do it too.

In Japan, there is a lot to be said about the appreciation of nature. Thanks to its position on tectonic plates, the landscape around the country is highly varied and beautiful. From volcanoes to mountains complete with waterfalls, Japanese nature is easily accessible.

Most families head straight to the rivers and mountains with children and tents in tow whenever they have a day off, so from childhood, the majority of Japanese people have a high sense of appreciation for nature. And it’s not just the things on land, but also in the sky too.

There is a fantastic Japanese New Year’s tradition of heading up to the top of a mountain to see the sun rise on the first day of the year, otherwise known as hatsuhi-no-de (初日の出). Japan is known as the ‘Land of the Rising Sun’ as it is the furthest east, meaning that in Japan you will see the first sunrise on earth for that year.

In Japan, it is not uncommon to know exactly when the sun rises and sets – so you can be in the perfect place to appreciate its beauty. In Japan there is a special sense of thanks and appreciation towards the bringer of warmth and light.

The moon is no different and people will often gather under the light of the full moon all year round.

Want to bring the magic of Japanese holidays like tsukimi to your home? Check out Sakuraco. Sakuraco sends locally-sourced, traditional Japanese snacks right to your door from all over Japan.

Why do Japanese People Celebrate the Arrival of the Full Moon?

Japan’s adoration of the moon dates back to the 8th century during the Heian Period, when aristocrats would gather on boats to drink and welcome the arrival of the mangetsu (満月) or full moon in Japanese. They would sing songs and have elaborate bands playing for them, all the while enjoying the beauty of the moon herself.

The tradition is believed to have come from China but has continued in Japan to this very day, having seen a surge in popularity around the Edo Period in line with the September Harvest.

To hear of aristocrats watching the moon seemed poetic and elegant to people at the time. They took this beautiful idea and applied it to their own harvest festivals around the end of September to the start of October, making tsukimi a way to both pray for and say thanks for that year’s harvest.

How to Celebrate Tsukimi?

Tsukimi can be celebrated in a variety of ways and the main one involves an outdoor party under the moonlight. As Japanese homes and gardens are often quite small, many people arrange to meet friends in a park or nearby public garden. Everyone brings along something to sit on, as well as drinks and snacks to share.

Remember that this is nighttime, so it will be fairly dark. This means that people can bring lanterns or fairy lights, too. Sometimes partygoers will bring candles and even small fireworks or music. Japanese garden moon viewings tend to have lanterns too. All of this adds up to create an atmosphere that is both beautiful and fun, being lit up with lanterns and full of life.

It doesn’t have to be in a big group, either. You can have a mini tsukimi with a couple of friends, a loved one, or even a pet! Just sit back, relax, and enjoy bathing in the moon’s beautiful ambience.

Sometimes people mix a tea ceremony with tsukimi which makes for a very relaxing evening indeed.

Let’s not forget the snacks! For tsukimi, there are special rice cakes called tsukimi dango (moon viewing mochi or rice cake balls). These cute little rice cakes are shaped to be round and have a creamy white color – just like the moon.

Traditionally, these were made in the likeness of the moon and offered to the moon god in order to request a plentiful rice harvest that year. The tsukimi dango were traditionally piled on top of each other in a pyramid shape, with the top pointing upwards towards the moon. It was said that eating the proffered rice cakes would bring the consumer wealth, luck, and happiness.

Silver grass and various other foods, such as healthy Japanese snacks like taro and edamame (boiled or steamed soybeans), that have a similar appearance to the moon were also offered. Sake (Japanese rice wine) is also a common offering to the moon in Japanese tradition.

Nowadays, people just enjoy eating these sweet little tsukimi dango, and there are many recipes on the internet detailing how to make your own.

If you don’t have time to make your own, you can of course buy some. Check out convenience stores, supermarkets, and Japanese wagashi (traditional Japanese snacks) stores. Sometimes these dango have cute rabbit markings painted on them around harvest time too.

If you want to experience tsukimi for yourself, try going to one of the Japanese garden moon viewings in a city near you. Just check the moon viewing dates, stock up on tsukimi dango, and enjoy the gardens as they are magically lit. You definitely won’t regret this magical experience.