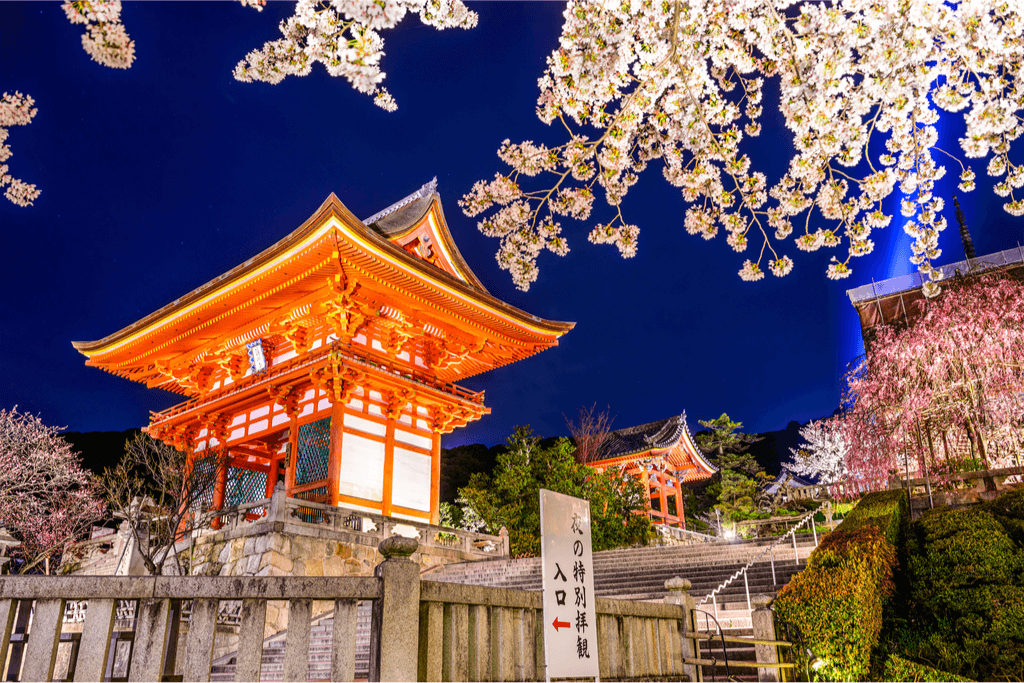 The former capital of Japan, Kyoto has retained its beautiful cultural heritage and customs. Each year, thousands of tourists flock to this city that is seemingly frozen in time to enjoy ancient Japanese traditions, delicious meals, and experience one-of-a-kind moments that can only be had in Kyoto.

There’s no denying that when most people think of the most beautiful city in Japan, Kyoto is the first that comes to mind. It is a city that is rich in culture, abundant in cuisine, and populated with traditionally built buildings and magnificent temples.

It is recommended for any first-time Japan traveler and always worth coming back for a visit. Let’s explore some of Kyoto’s charms together.

Icons of traditional Japanese entertainment, Kyoto is one of the few places in Japan where one can enjoy a geisha’s hospitality. The word “geisha” means “entertainment” and “person” and there are none better when it comes to hospitality in Japan.

Many geisha start training for their profession from a young age. During this time, they learn different fine arts, which include dancing, how to play traditional instruments like shamisen or the koto and apanese tea ceremony. They also learn calligraphy, flower arrangement, and how to hold a conversation with a customer.

By the time they graduate from their apprenticeship and are officially acknowledged as a full-fledged geisha, they have already trained for years to stand in front of the customer. The geisha has become an integral part of Kyoto’s allure and it’s not hard to see why.

Kabuki comes from three kanji (ka meaning “sing,” bu meaning “dance”, and ki meaning “skill”) that when put together can be translated to “the Art of Song and Dance.” However, kabuki is much more than those two elements.

Like western musicals, kabuki also incorporates costumes, lighting, and other production elements in order to make an unforgettable experience.

Kabuki plays can often be separated into three main categories: jidaimono, sewamono, and shosagoto, or historical, contemporary, and dance.

But generally speaking, kabuki is all about the experience and puts heavy emphasis on impressing their audience with audacious sensory displays that are sure to amaze.

Interested in experiencing even more tradtional Japanese culture through the enjoyment of snacks, especially from Kyoto? Sakuraco sends traditional Japanese sweets & snacks, from across Japan to your door.

A festival that originated in the aftermath of the major Jogan earthquake, Emperor Seiwa ordered his followers to conduct a Shinto ritual to appease the angry spirits and console the souls of the dead. The ritual was known as a goryo-e and was considered to be a success, so much so that Emperor Seiwa declared that it would be held annually.

Gradually, the tradition morphed overtime, as artists and the merchant class began to sponsor the event and the ritual turned into a celebration. Today, the Gion Festival is one of the most popular events in Kyoto. Massive wooden boats are painstakingly created and decorated while festival goers indulge in the celebration.

In the heat of the summer, there’s nothing quite like cold noodles to cool you down. Nagashi somen is a unique experience that is enjoyed by both children and adults. Somen is a soft white noodle that is thin in diameter (less than 1.3mm).

Alone, it lacks impact, but with the addition of nagashi, prepared noodles are placed on a bamboo tube slide and into the waiting chopsticks of hungry diners. The noodles flow down the slide and it is up to one’s chopstick skills if they’re going to have a good meal or go home hungry.

The somen is often accompanied with tsuyu or a savory dipping sauce that compliments the noodles. In Kyoto, there’s a special restaurant where customers can enjoy this experience while overlooking a flowing river.

There’s no other way to describe Kyoto’s cuisine as anything but Japanese cuisine at its purest form. Kyoto is most famous for its renowned kaiseki–ryori. It is a multi-course meal that uses natural, seasonal ingredients that are beautifully plated.

In addition, there is also obanzai-ryori, or Kyoto-style home cooking that allows for one to eat traditional Japanese foods in a more comfortable environment.

For those that are looking for an experience off the beaten path, there’s also shojin ryori, or vegetarian Buddhist cuisine, that follows the tenets of Buddhism when creating a meal. These examples are just simply scratching the surface, but rest assured, there’s nothing quite like the food in Kyoto.

Just like its cuisine, the desserts in Kyoto take the tradition of Japanese cuisine and create balanced sweets known as wagashi. Some of the more popular desserts include the crepe-like yatsuhashi to the skewered and sweet mitarashi dango. With these classics, Kyoto has more than enough appeal to satisfy everyone’s sweet tooth.

Not only does Kyoto have seasonal foods, they have seasonal desserts like mizu manju. This dessert uses kuzu starch to create a dewdrop effect that can draw anyone’s attention. Because of this, Kyoto’s desserts are known for being very enticing.

Each temple usually has their own garden and many people marvel at the effort taken to create perfection. If you’re looking for some peace and quiet, a temple is the perfect place for you.

Have you ever been to Kyoto? What have you experienced? Let us know in the comments below!