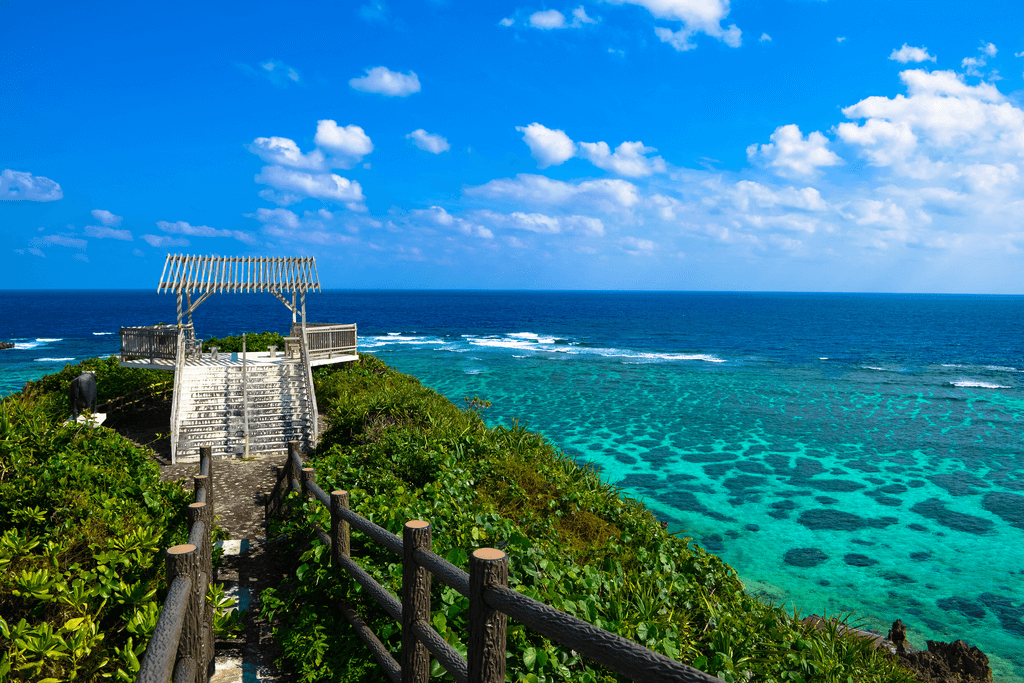 Okinawa Prefecture is a subtropical archipelago around 400 miles (644 km) from mainland Japan.  A popular vacation destination for both locals and foreigners alike, Okinawa is home to diverse coral reefs, a strong sense of community and many important historical sites, such as the soon-to-be-rebuilt Shuri Castle.  But what makes Okinawa, Japan, so special?  Let’s take a closer look at their history, as well as their food, clothing, and famously healthy lifestyle.

The Ryukyu Kingdom was a kingdom in present-day Okinawa.  It lasted for over 400 years (1428-1879) and served as a major port in maritime (read: sea) trade in both East Asia and Southeast Asia.

Moreover, it consisted of three smaller kingdoms, known as Sanzan (Three Mountains). They were: Hokuzan (Northern Mountain), Chuuzan (Central Mountain) and Nanzan (Southern Mountain).  During the existence of the Three Kingdoms, many Chinese people immigrated to the islands, due to its growing power.

However, in 1590, the Ryukyu Kingdom had their first encounter with Japan.  Toyotomi Hideyoshi, then-shogun, asked the kingdom to help them invade Korea. He then added that if the invasion was successful, he would go on to invade China.  The Ryukyu Kingdom refused this request because they had a 200 year-old allyship with the Ming Dynasty at that point.

In response, feudal lords of the Satsuma Domain (present-day Kagoshima Prefecture), sent forces to invade the Ryukyu Kingdom in 1609.  As a result, the kingdom was now subject to both Japanese and Chinese rule, but still maintained some autonomy.

Because of its strong past as maritime traders, Okinawan culture is a fusion of Chinese, Japanese, Korean and Southeast Asian cultures.  As such,  their clothing and lifestyle is generally more vibrant than the rest of Japan, which is most apparent in its capital city, Naha.  Examples of these differences lie in ryusou, moai and ikigai.

Naha (The Capital of Okinawa)

Since medieval times, Naha has served as the economic and cultural center of Okinawa, Japan. It has many notable landmarks that are cherished by both locals and tourists. Its name comes from the word naba, a Western Japan/Ryukyuan word for “mushroom”.  In this case, the name referenced a large, mushroom shaped stone in the city.  Over time however, the stone wore away, and the pronunciation changed with it.

Naha is also home to Shuri Castle, which was home to the former Ryukyuan royal family.  It was originally built in the 14th century, and Sho Tai, the first king of the unified islands, was the first monarch to live in it.

It was a majestic, red castle that served as a cherished symbol of the former Ryukyu Kingdom.  Shuri Castle is currently under construction due to an unfortunate fire back in 2019.  In the meantime, visitors can head up to Tobu World Square in Nikko if they wish to see a 1/25 replica of it.

Other notable landmarks in Naha include Shureimon (one of Shuri Castle’s main gates), International Shopping Street and the Okinawa Prefectural Museum/Art Museum.  Visitors can also try on ryusou traditional dress, learn how to tie dye at Shuri Ryusen, and enjoy some Okinawa soba at local restaurants.

Ryusou is the traditional dress of Okinawa, Japan.  While it might look like a kimono, there are some key differences.  For example, ryusou sleeves are much much wider to compensate for warm, tropical weather. In addition, they involve much brighter colors and patterns than the kimono.

Finally, the ryusou uses a thin waistband instead of the heavier obi sash.

In addition to the style of the dress itself, the fabric of the ryusou is also lighter.  This is because artisans use shōfu and bashōfu fabrics, which are hemp and banana fibers, respectively. Most ryusou are two-piece garments that consist of a top and bottom.  The top is the aforementioned robe, while the bottom is a pleated skirt or trousers, depending on someone’s gender and social status.

Moai and Ikigai (Community and Purpose)

Another aspect of the Okinawan lifestyle are the concepts of moai and ikigai, which mean “social support group; community; lifelong friends” and “purpose”, respectively.  A moai is a group of friends who you build a strong bond with, sometimes starting from as young as the age of five. This group is meant to support you emotionally, socially, and even financially, which relieves stress for a lot of people.

Ikigai loosely translates to “purpose”. However, a more accurate meaning would be to “find joy in life through purpose”.   While many people may connect it to their job, others connect it to a favorite hobby. Regardless of the reason, it’s this sense of purpose that motivates elderly Okinawans to have a fulfilling life, well within their 100s.

Anyone would agree that having access to year-sound sunshine and lovely beaches would make anybody stress-free. Nevertheless, it’s a strong sense of community and purpose that has helped Okinawans maintain their lifestyle ever since the days of the Ryukyu Kingdom.

Combined with their colorful and practical ryusou, Okinawa has much to offer in terms of a fruitful and healthy lifestyle.What’s more, there’s one crucial aspect to Okinawa that we simply can’t forget–the food.

During the time of the Ryukyu Kingdom, developed the method of making kokuto (brown sugar).  Though sugarcane grew plenty on the islands, it wasn’t until around 1623 that they learned how to cultivate it.

The person who spearheaded the manufacturing of kokuto was Gima Shinjo, an esteemed member of King Sho Nei’s court. During a routine tribute journey to Fujian, China, he commanded members of his staff to study sugar manufacturing.  Upon their return to the Ryukyu Kingdom, they performed the first refinement at Gima’s house, and the method spread across the islands.

This breakthrough would go on to sustain Okinawa’s economy for hundreds of years, up to today. Kokuto is not only delicious, but it’s also incredibly healthy. It’s a major source of iron, potassium and calcium.

While it can be eaten raw, another common use for kokutou is kuromitsu. Kuromitsu is a type of dark sweet syrup that people use to flavor many traditional Japanese sweets such as warabimochi and karinto.  However, a couple of kokuto cubes and green tea will also work just fine.  People stir-fry it with braised pork as well.

In Okinawa, Japan, people drink jasmine tea (sanpin-cha), rather than green tea.  Due to its relaxing aroma and numerous health benefits, there are many tea plantations throughout the islands.  However, Higa Seicha is the most well known tea cultivation company.

Higa Seicha was founded over 60 years ago by Shizuko Higa.  She developed her own blend of jasmine tea by blending Japanese and Taiwanese teas.  To make things even more interesting, Shizuko is still a major part of the company to this day.  The fact that she is thriving at the age of 93 is not only a testament to her success, but to the healthy Okinawan lifestyle as a whole.

Nanpudo is home to snow salt-flavored chinsuko, a shortbread biscuit influenced by Chinese and Portuguese traditions. Snow salt can only be found on Miyako Island, one of Okinawa’s many islands.  It’s made through a natural filtration system made of limestone, which removes impurities, while taking on calcium from the coral nearby.

While Nanpudo, like most of Okinawa’s economy is located in the capital Naha, it utilizes Miyako sea salt. It’s noted for its salty taste combined with the light sweetness of the shortbread pastry. They also make for great souvenirs and use other flavors such as sweet potato.

Shikuwasa is a citrus fruit native to Okinawa, and is a very common flavor used in drinks and candies. To make things even more interesting, this particular shikuwasa comes from Ogimi Village, notable for its long life expectancies.

Marukiyo also makes cinnamon cookies.  While most cinnamon sweets use the bark, Marukiyo uses the leaves instead.  This allows for a very flavorful experience, without harming the trees in the long run.

With its culture enduring through the ages, Okinawa, Japan has remained a timeless island paradise.  This past August, Sakuraco’s monthly box featured many of the prefecture’s specialities. Subscribe now to experience more.