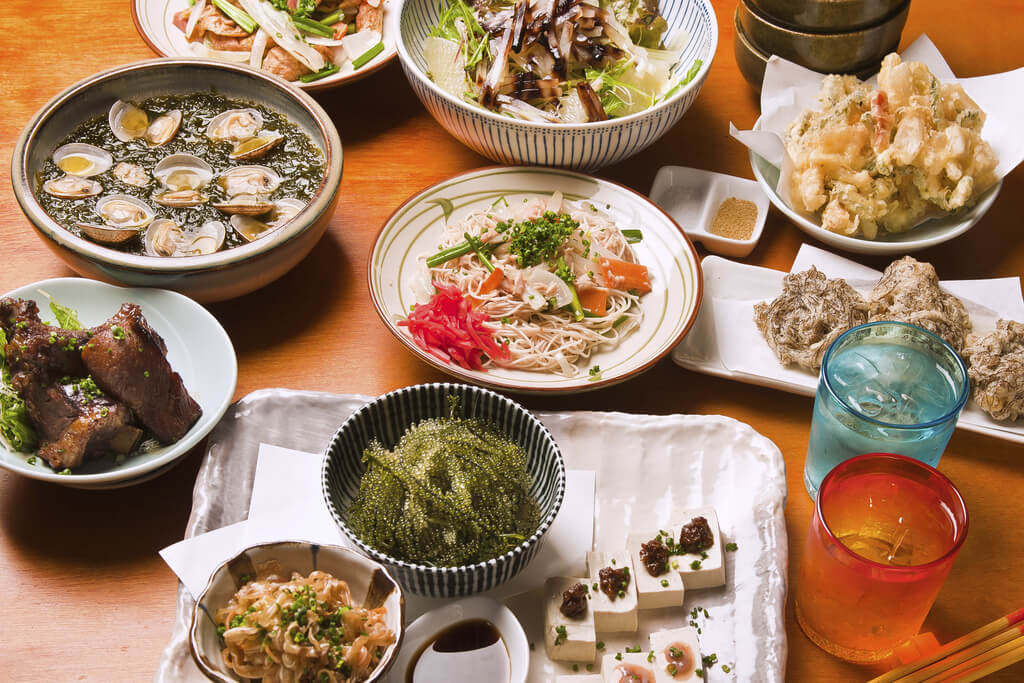 Okinawan food culture is famous for its range of cuisine and the culture of food it supports. It’s also surprisingly different from Japan’s mainland dishes.

Okinawa Prefecture consists of more than 150 islands, with the largest island also known as Okinawa. It is located between Taiwan and Japan’s mainland. It is the fifth-largest island in Japan and is known as a tropical paradise with its warm climate, broad beaches and coral reefs. It a popular vacation spot in Japan with millions of tourists visiting and exploring Okinawa every year. Okinawa also has many historic World War 2 sites and has been a strategic base for the US Armed forces since the Battle of Okinawa during the 2nd World War. Its beautiful location and fascinating history has contributed to the unique Okinawan food culture we know today.

Okinawan food culture is famous for its range of cuisine. It is also surprisingly different from the mainland dishes. Due to the long settlement of USAF soldiers and their families as well as their proximity to Taiwan, there are visible American and Taiwanese influences in their cuisine. Some of the more popular dishes from Okinawa include gōyā chanpurū (bitter gourd stir-fry), fu chanpurū (gluten stir-fry), tonkatsu (pork cutlet), and many more. These are normally served in the local izakayas (Japanese pubs or taverns) and cafés.

Want to experience Okinawan and other Japanese snacks and sweets? Sakuraco ships all over the world right to your door.

Gōyā Chanpurū: This dish is quite healthy, owing to the lightly stir-fry of goya (bitter melon) which has great potential in improving bodily functions. Goya is also considered to be a weird Japanese food for those unfamiliar with it. Chanpurū in Okinawa means a mixed-up dish. It is one of the signature dishes of Okinawa and is made by stir-frying goya. The goya chanpuru is a combination of eggs, tofu, and some meat.

Fu Chanpurū: Similar to goya chanpuru, Fu chanpuru is made of wheat gluten and has a base made of eggs, tofu, vegetables, and more. Wheat gluten is known as “kurumafu” and typically can be found sold as a yellow tube. Excess bits of the gluten are removed and then cooked with water and egg. The moisture is then thoroughly removed, and the gluten is cooked into chanpuru. This is one of the most popular delicacies in Okinawan cuisine.

Shikuwasa: Shikuwasa is a green citrus fruit native to Okinawa and tastes similar to lemon and lime. It is mainly used to flavor dishes in similar applications as lemon. Since shikuwasa is common in Taiwan as well, it is also known as a Taiwan tangerine. It is rich in flavonoids and because of this, it is considered to be very healthy! Shikuwasa is a flavor strongly associated with Okinawa with cafes and shops selling shikuwasa-flavored juices and ice cream.

Tonkatsu: Tonkatsu is a tenderized, breaded, and fried pork cutlet, which consists of pork loin or fillet. Tonkatsu is a combination of Ton (pork) and Katsuretsu (cutlet). Normally, tonkatsu is served with rice and a vegetable salad, and occasionally with special tonkatsu sauce.

Okinawa Agu Pork: Okinawans consume a very high percentage of pork in their daily diet.  While there are many brands of pork, Agu pork is the most popular. It is native to Okinawa and made from black Okinawan pigs (Agu). It is also known as “Phantom Pork”.  It has low cholesterol and is high in amino acids and Vitamin B1. It also has a lower melting point. It can be used for making several Okinawan food such as Agu shabu-shabu (a style of Japanese hot pot) and Agu pork yakiniku (Japanese barbecue).

Beni Imo: Beni imo is basically a sweet potato from Okinawa. Its flesh is purple in color and is pleasantly sweet. It is also rich in fiber, Vitamin A and C, and is considered as a superfood. It’s used in various sweet dishes like cheesecake, ice cream, brownies, and other sweets.

Okinawan Soba: Okinawan soba (wheat noodles) is one of the signature Okinawan food and consists of wheat noodles served hot in a soup, usually with pork (rib or pork belly). The mainland soba, however, is prepared with buckwheat noodles. Okinawa soba is a regional collective trademark of The Okinawa Noodle Manufacturing Co-op.

Taco Rice: Okinawa taco rice is a mixture of Japanese and Tex-Mex style American cuisines. US military bases have existed in Okinawa since the end of the 2nd World War. When they arrived, they brought tacos, and while tacos themselves are famous, locals combined tacos with rice to make a new dish, served with taco seasoning and salsa.

Hirayachi: Hirayachi is a special pancake-type dish from Okinawa, and has been used as an emergency food since it can be made easily on a portable gas stove. It’s made of eggs, flour, salt, black pepper, and green onions, which are then thinly pan-fried. It can be eaten with a sauce made of soy sauce, sesame oil, or any others.

Rafute: Rafute, which is another popular Okinawan dish, is a braised pork belly. It is a sweet and savory dish. It is cooked slowly in awamori (Okinawa distilled liquor), Okinawan black sugar, and soy sauce. The slow cooking process softens the meat, which makes it easy to eat with chopsticks

Tofuyo: This is fermented tofu, made with soybeans, rice wine, salt, and sesame oil or vinegar. Its texture is said to be that of cream cheese and the taste is strong with the presence of the alcohol being clear.

Jimami Dofu: Jimami dofu is a tofu-like dish, which is made from a liquid from peanuts, mixed with sweet potato starch. The use of soy is normally avoided for jimami dofu. Like tofuyo, it is also creamy, delicate, and slightly sweet. High in Vitamin B1 and Vitamin E, it is great for the skin, provides energy, and is also useful to reduce the buzz after a drinking party.