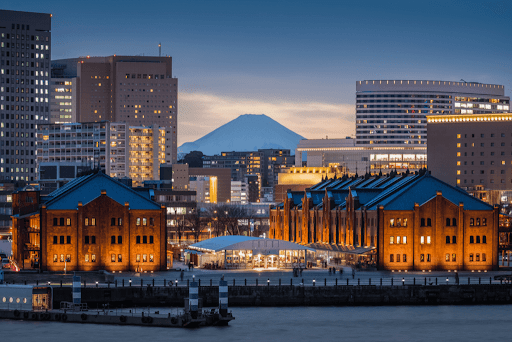 Japan took to studying many culinary imports when it ended its period of isolation in 1853. Looking to rapidly catch up with the outside world, anything foreign was examined, imitated and sometimes improved on. Many of these imports first arrived in Yokohama, from where they would spread to the rest of the nation and sometimes back overseas.

Yokohama was the site of a major cultural shift, and effectively the birthplace of modern Japan. A calm little fishing village until just over 150 years ago, the arrival of a fleet of American ships in nearby Tokyo harbor meant an abrupt end to over 250 years of national isolationism, so called sakoku policy.

In an effort to keep the foreign influence at some distance to both the capital and major trade routes, the small harbor of Yokohama was chosen. Since foreigners were not allowed to set foot on Japanese soil before, the opening up of Yokohama in 1859 led to a lot of entrepreneurs from other countries setting up shop. Yokohama would become the base for foreigners in Japan, both new arrivals and those seeking to make a living.

A lot of these new arrivals brought with them their own trades, especially those of a culinary kind. The food landscape in Yokohama quickly evolved into a cultural melting pot, often with a Japanese twist put on foreign dishes and vice versa.

Japanese cuisine had been influenced by foreign food before, but since what little trade there was during the sakoku period was restricted to the Dutch and Portuguese, and no permanent settlements were allowed, it was mostly things like sweets that would keep for longer periods.

These western style sweets did exert some influence, but initially failed to really compete with traditional Japanese sweets, or wagashi. This was all due to change with the reopening of Japanese borders and a change in attitude towards anything foreign.

One of the earliest imports to hit the taste buds of foreign residents and curious Japanese locals was ice cream in 1865. Unbelievable by today’s standards, ice was an expensive commodity at the time, imported all the way from the USA until slightly cheaper routes via China were established.

Japan’s first ice cream parlor was established by an American named Richard Risley, who marketed his treat as ‘European Comfort for Ladies and Gentlemen’. This, and the fact that the store was called an ice cream ‘saloon’ gives a hint of the then status of ice cream as a luxury. For the average worker this sweet refreshment was unattainable, with the price for one serving roughly half a month’s average wage at the time.

Customers were foreign at first, but Japanese people soon grew interested and just a few years later in 1869, the first truly Japanese ice cream parlor opened in Yokohama’s Bashamichi neighborhood. While Japanese mochi ice cream is now world famous, this early treat was more on the western side, made with just milk, eggs and sugar. At first called ‘ice kurin’ the original recipe has been revived and slightly updated by a store called Bashamichi Ice, which continues to sell it.

Japanese beer shares almost the same timeline as Japanese ice cream. First imported into Yokohama from Britain in 1865, an American would open the first brewery on Japanese soil only four years later in 1869.

Unlike ice cream however, beer would catch on at a slower pace, with the so-called ‘Japan Brewery’ quenching the thirst of foreign residents initially. This would not change until the brewery would find its way into Japanese ownership in 1885, under which it would release the now world famous Kirin beer in 1888. More suited to local taste, it quickly became one of the best selling Japanese beers.

Kirin is still brewed in Yokohama, with the local factory offering tastings and free tours.

Perhaps the most ubiquitous Yokohama-associated dish is not a sweet or a drink, but a fairly simple spaghetti dish. Now considered a soul food and available all over the country, Spaghetti Napolitan was the result of the head chef of Yokohama’s prestigious Hotel New Grand experimenting with US military rations shortly after WWII.

Far from authentic Italian cuisine, this extremely popular dish is a perfect example of a whole style of food known as yoshoku in Japan, literally ‘Western food’. Yokohama was a frontier for these dishes, and is still famous for many of them, like curry, omurice, and many more.

One of Japan’s most popular recent exports deserves a special mention. While Japan’s history of making it is more closely tied to the Kansai region, the very first whisky is said to have made it to Japan with the very same fleet that was responsible for ‘reopening’ the country.

Intended as a gift for the Japanese Emperor, Commodore Matthew Perry brought several barrels of American whiskey, sowing the first seeds for what would later become one of Japan’s most successful reimagining of a foreign specialty.

These are just a few examples, with many more culinary and cultural imports making their Japan debut in the country’s second largest city. Hygiene items like soap, household goods like matches, photo studios and even sports like tennis all made their first appearance in Yokohama before spreading to the rest of the country.

The mix of cultures the opening of Yokohama’s harbor brought still remains, with the vibrant city not only a popular place to live for its relaxed nature, but also a common day trip destination for stressed out Tokyo-ites. We certainly recommend a visit on your next trip.

Are you curious about visiting Yokohama? Or maybe you’ve already been? Let us know your thoughts down below in the comments.