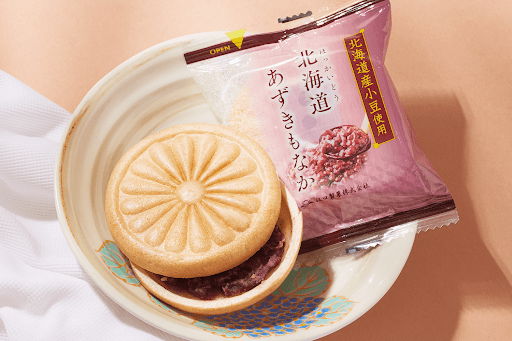 When reading about traditional Japanese wagashi sweets, it’s impossible to miss the simple but delicious monaka. Fukuoka prefecture’s Eguchi Confectionery have not only mastered the basic monaka in 70 years of operation, they are also constantly looking for new flavors.

Monaka is a simple, traditional Japanese sweet that first appeared in the Edo period (1603 – 1867). The first monaka were simple wafer discs, made by steaming a dough made from rice powder and water, which was then baked and sprinkled with sugar. Eventually the non-candied side of these early monaka had patterns or motifs added to them by pressing the dough into molds.

Not long after, the discs would be doubled, sandwiching sweet anko red bean jam in-between instead of hardened sugar. As confectioners grew wiser in their methods, the monaka grew softer, until it took on its present day shape in the Meiji era at the end of the 19th century.

The formerly flat pieces of wafer had turned oval, perfectly enclosing their red bean jam core like a clam shell. They had also lost some thickness. Whereas early monaka were almost more hard biscuit than wafer, this new style was focused on balancing outer crispiness with the soft and sweet filling. Molds were also used extensively to give them the shape of anything from seasonal flowers, to Chinese characters and animals.

Modern monaka can take on almost any shape and contain any filling. In fact, the shape of a monaka can often be most important: Trains, cars, fruit, animals and many many more exist, often as a regional specialty souvenir. There is also no shortage of fillings, with red bean paste no longer a must. Chocolate, fruit jam and even ice cream are common.

The thin monaka wafers are also occasionally used as packaging for traditional Japanese soups, like sweet oshiruko. Ingredients are closed up inside the wafer, to only release their full flavor when boiling water is poured over them.

Fukuoka Prefecture based maker Eguchi have been focusing on making monaka since their founding in 1948. They are particular about using only locally sourced ingredients, from the glutinous mochi rice used to make the shells, to the various fillings they offer.

Unlike many larger confectionery makers, Eguchi have kept their product lineup more or less the same since their inception, focusing only on the finest monaka and jellies. The shape of their wafer is a classic one: The chrysanthemum flower, a symbol for Japan’s imperial family and a nod to the period of monaka’s conception, the Meiji era.

Eguchi’s dedication to tradition has not kept them from experimenting with different flavors however, all the while staying true to the idea behind wagashi like monaka: To compliment a cup of tea, rather than overpower its flavor.

Besides the unchanged and delicious original anko red bean paste filling, Eguchi have released a number of other flavors focusing exclusively on regional specialties from Japan’s southern island of Kyushu. Japanese citrus fruits like yuzu and hyuganatsu, anno potatoes from Kagoshima, chestnuts and yamecha tea from Fukuoka are just some examples.

Besides these local specialties, they have also released monaka with bolder flavors that still pair well with tea, but also work well on their own. Ginger, coffee & cream, or rum & raisins are some notable examples.

Eguchi’s highly regional focus, long history, and commitment to one particular traditional Japanese sweet were more than enough reasons for us to reach out to them. We’re proud to have been collaborating with them since the very beginning of Sakuraco, bringing our customers honest Japanese monaka filled with Kyushu’s regional specialties.

Have you tried monaka or similar wagashi yet? If not, would you like to try? Let us know in the comments below.