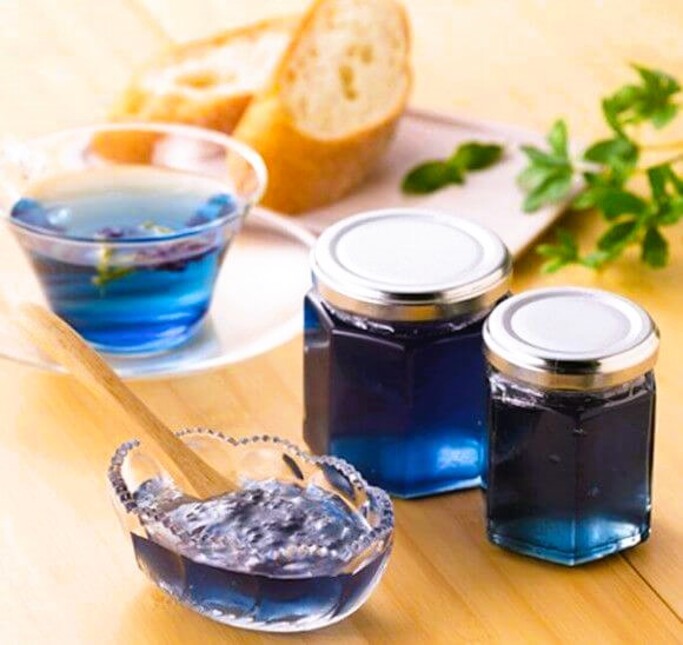 Even though there’s no Japanese apple tree with blue fruit, there is gorgeous blue apple jam from rustic Aomori Prefecture! This jam is trendy and holistic and a perfect union of Japanese apples and Thai flowers, pairing well with various dishes and delights. But what makes these products unique on their own? Moreover, how was one woman able to bring them together?

Throughout the country, there are wide varieties of Japanese apples. However, the most prized apples hail from Aomori, Japan’s northernmost prefecture on Honshu Island. Their high quality is due to their cool summers, which are ideal for apple orchards than rice.

Despite not being native to Japan, Aomori apples came to fruition after the Meiji Restoration in 1868. The original planters were unemployed samurai who used apple seedlings procured from the United States. Since then, the rural prefecture has transformed into an apple powerhouse, with its produce spanning worldwide.

Its Fuji apples, particularly, are noted for their size, long shelf life, crispness, and sweetness. Their harvest season is from August to November, and harvesters use apples in many dishes, such as pies, juices, and jams.

However, most Japanese apple jams are lovely golden or orange, making it difficult to stand out by appearance alone. Because of this, some makers have looked into natural methods of food coloring to make their products more appealing and unique.

Want to experience beautiful and delicious artisan food from Japan? Try Sakuraco! Sakuraco sends traditional Japanese tea, sweets, and snacks to your door every month so you can have a relaxing snack time at home!

The butterfly pea or anchan (Clitoria ternatea)  is a flower native to Asia, particularly Thailand. Because of its radiant blue petals, many people in the area use it as a natural food coloring for tea, confectionery, and even rice.

These flowers are also in traditional Ayurvedic medicine. According to experts, they have numerous health benefits. They include improved skin hydration, blood sugar control, and weight loss. Nevertheless, the butterfly pea tea’s beauty delights everyone who drinks it.

This tea is even more remarkable because its color changes depending on its acidity. For example, a pleasant dash of lemon juice turns the tea a deep purple. On the other hand, mixing it with rose hibiscus leaves turns it a scarlet red. Its natural taste is similar to Japanese green tea and generally safe to drink.

In 2016, an Aomori-based English teacher named Yuko Oyama received Thai anchan tea as a souvenir gift from a friend. Oyama fell in love with the tea’s royal blue color and wanted “to make products…that will ease hard-working women’s minds.”

Even though many people discouraged her because blue was not a traditionally appetizing color, Oyama persevered in her dream. After much brainstorming, she realized she needed to connect the tea with Aomori’s world-famous apples! Oyama knew that unifying Aomori’s specialty with anchan tea’s unique appearance would make the jam a viable souvenir.

After much collaborative research, the Aomori Naturally BLUE Jam debuted in 2016 and was a massive success. Many blogs covered not only the jam’s jewel-like appearance but also its versatility. Most people use the gorgeous condiment to flavor their bread, pastries, and yogurt.

Because of the blue Japanese apple jam’s success, the company–APPLE loves BLUE–developed many other visually appealing jams. The most recent is their Naturally RUBY jam, made from Aomori apples, black currants, and roselle (Hibiscus sabdariffa) flowers. For those who simply want tea, APPLE loves BLUE also sells anchan tea extract, which people can use in all kinds of beverages.

The blue Japanese apple jam indicates not only one woman’s innovation and fondness for her hometown specialty but the creativity of local makers. Furthermore, the cross-cultural combination of Thai anchan tea and Aomori apples is a testament to our connection as gourmets and people.

As people, we enjoy food as both a necessity and a pastime. We want our dishes to be both delicious and visually appealing. It also helps if the ingredients are natural since it gives us peace of mind about our health. In addition, we have become much more conscious about supporting our local makers because of their deep care for our products and what they can make.

Marvelous culinary achievements, such as the Aomori Naturally BLUE jam, remind us that passion, collaboration, and good taste can go a long way. Relaxing with a hearty helping of blue Japanese apple jam is one of many simple ways to support creativity and local artisans.