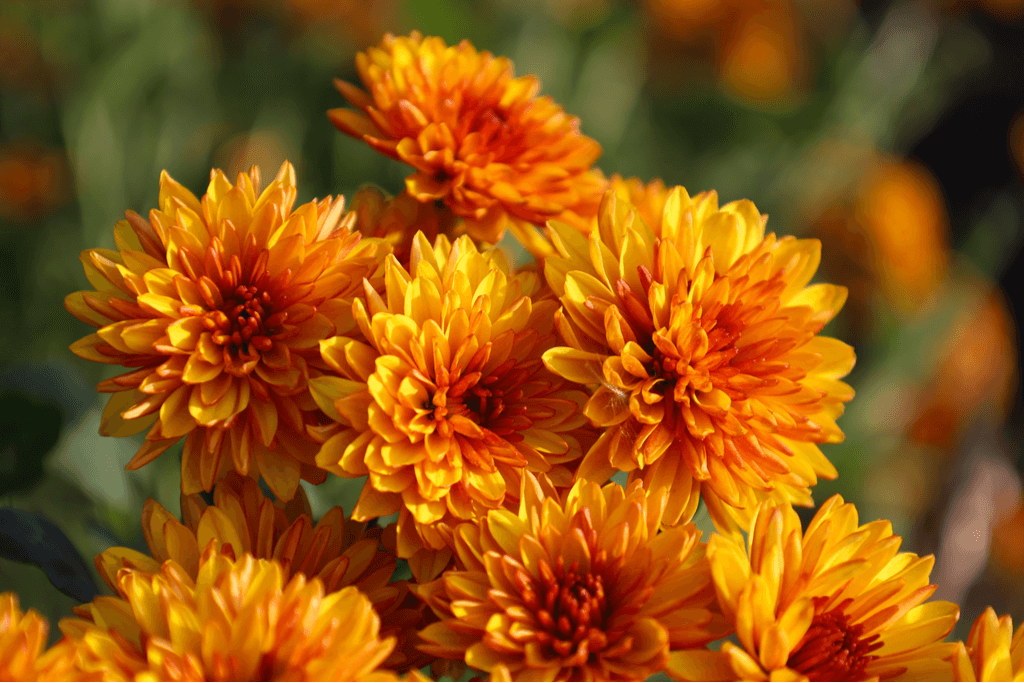 Japanese autumn flowers and the changing leaves go hand-in-hand with the kōyō (colorful leaves).  Many traditional Japanese poems center some of these flowers in their work, so much so that they even have their own name: aki no nanakusa (The Seven Flowers of Autumn).

However, the modern Japanese autumn flowers are much more different.  We will now take a look at the fall flowers that bloom across all the parks and gardens in Japan.

In Japan, people really cherish the chrysanthemum.  They are a major part of Japanese culture because they are used as Buddhist offerings.  In addition, they are a major motif of the government, as they are present on the Japanese passport, as well as in the imperial family crest.

Though it may seem as a purely ornamental plant, chrysanthemums have been a staple in traditional medicines ever since the Heian Era (794–1185). Because of this, this Japanese autumn flower can be enjoyed even in tea form.

Chrysanthemums are also edible. Rather than eat the whole plant, people usually use the flower petals as a garnish.  They pair best with sashimi and soy sauce, giving the food an aromatic, yet bitter taste.  In other cases, chrysanthemum petals can also be steeped in vinegar and eaten as a salad.  The name of this dish is kikka no ohitashi.

With its numerous petals and varieties, chrysanthemums are a staple in the traditional Japanese lifestyle.  Not only are they a marvel to look at, but they are also delicious as well. The chrysanthemum flower is quite the sight to behold among the changing leaves of kōyō).

The red spider lily is another beautiful Japanese flower that blooms in the autumn.  Similar to the chrysanthemum, it’s breathtaking, has numerous petals, and is heavily associated with Buddhism.  But this is where the similarities end.

Because of its usually vibrant red appearance and thin, almost sharp petals, the red spider lily has two names in Japanese.  The most common name is higanbana, or the Buddhist name for the “flower that blooms during the autumnal equinox by the Higan (distant shore) of the Sanzu River”. The other name is “manjushage”, or “beautiful jewel of a flower which grows from the sand”.

According to legend, the “Sanzu River”, Buddhist mythological body of water.  The Sanzu River is where the world of the living and the dead intersect and where the red spider lily grows.  Because of this strong association with death, it is very taboo to give someone a bouquet of red spider lilies. They’re also very poisonous, which is fine as a natural pesticide, but extremely unsafe for anyone to eat.

Nevertheless, the red spider lily is still a gorgeous flower.  Many people can observe many gardens of it at Hitachi Seaside Park in Ibaraki Prefecture.  They are best viewed during the autumnal equinox in September.

The cosmos flower is to fall, as the cherry blossom is to spring.  It’s even in the name–akizakura, which is written with the kanji for “fall” (aki) and “cherry blossom” (sakura). Akizakura refers to the flower’s pink and perfectly uniform petals, just like its spring counterpart.

Cosmos’ English name comes from the Greek word for “beautiful”, which is an understatement. These flowers are downright stunning, especially on a sunny day in a green meadow.  While they’re usually pink, cosmos flowers can also be white and red!

According to the language of flowers, cosmos represent love, modesty, beauty and sincerity. They usually bloom from October to November and can be found across Japan.  Notable parks include Showa Kinen Park in Tokyo and Iwappara Cosmos Park in Niigata

Similar to chrysanthemums, some cosmos flowers can be used as a light garnish in salads.  But on a whole, most people prefer to gaze at the cosmos rather than consume them. These autumn cherry blossoms are truly enchanting beyond measure and transcend any season.

The kochia–or summer cypress–is a flowering bush plant that grows across the entire Eurasian continent. While its name denotes its prevalence in the summer, the kochia is absolutely breathtaking in the fall.  It starts off green, but by mid-October, the kochia turns into a bold shade of red.

Its Japanese name, hōkigusa, refers to the kochia’s bristling leaves, or “a plant for making brooms while drying”.  So not only is the kochia beautiful, it’s useful as well.  However, these days, kochia is mostly for decorative purposes, especially at Hitachi Seaside Park.

When they turn red in mid-October, the seemingly endless rows of kochia resemble a blazing carpet of fire. Because of this, kochia is known by another name–burning bush. This is truly a sight to behold among the falling autumn leaves.

Because most kochia are decorative and carefully planted in Japan, people can only see them for a limited amount of time. So it’s best to view them before the year is out, before the park staff replants them at a different location.

Pampas grass, also known as Chinese silver grass, is a cultural staple in Japan, especially during the tsukimi season.  They resemble silky, metallic bundles of rice.  Because of this, people offer pampas grass to the moon gods during the mid-autumn harvest season as a proxy for rice.

Additional offerings during the festive season include tsukimi dango, taro (a type of yam) and various produce such as chestnuts, pumpkins and edamame. It’s very common to see pampas grass and these offerings roll around during tsukimi season.

While the plant itself has no edible properties, it is an amazing ornamental plant. Not only is it low maintenance, and long-lasting, but someone can replant it as many times as necessary.. This makes pampas grass a gorgeous and sustainable plant.

There are many places in Japan where people can marvel at pampas grass.  The most popular places include Sengokuhara Plateau in Kanagawa and Senjogahara in Tochigi.  While autumn usually conjuries up imagery of red and gold leaves, lying among the pampas grass can make for a gentle and relaxing experience.

Japanese autumn flowers are special because they remind us that as the leaves fall and pass on into winter, there is still plenty of life in the grass.  They inspire legends, poetry and an immense amount of travel.

While there are plenty of perennial flowers that still bloom in the winter, these flowers are shining examples of the fall harvest and the changing seasons.  Which of these flowers do you like the most? Let us know in the comments below.