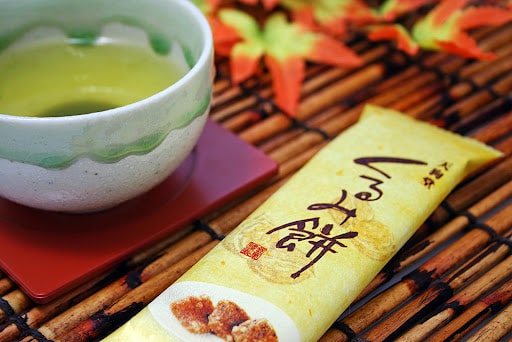 Glutinous rice pounded into a sticky, pleasantly chewy consistency has slowly been becoming popular outside of Japan. Whether as wrapping for ice cream, fruit, red bean paste, or by itself, mochi is a hit worldwide. Modern variants on the sweeter side have been especially popular, but mochi’s origins are a bit more reserved.

Mochi’s history is about as old as that of rice cultivation. The process of making it sounds simple, but especially in a time before machines involved plenty of elbow grease.

At its simplest, mochi is made with short grained, glutinous white rice. The rice is steamed and then pounded over and over again until it turns into a sticky paste that can be used to shape cakes. It can be eaten as is or used to encase a sweet filling like red bean jam. While mochi is eaten in different shapes all year round, in its plainest form it is central to several key Japanese rituals and seen as auspicious.

The most important of these rituals take place during the New Years celebrations. People gather to communally make mochi in the old fashioned way: With a giant wooden bowl, a big pestle, and people taking turns pounding the rice into shape. The result is then eaten as part of the festivities.

Mochi can be combined with both sweet or savory ingredients, making it an extremely versatile ingredient in the world of traditional Japanese sweets, or wagashi. Most commonly, mochi is filled with sweet red bean paste, but modern confectionery makers have found the slightly chewy material to be the perfect case for many other fillings. From jams to ice cream, almost anything can be used, with the chewy outer and sweet soft inner offering a perfect contrast.

Savory variants also abound, many of which are part of celebrations such as ozoni a special Japanese New Years mochi soup. Mochi’s chewy texture changes slightly when used in hot dishes, and can also be added to Japanese hot pots like nabe or Japanese pancakes called okonomoyaki.

Mochi is not just important for certain festivities, it is also part of legends. Whereas European folktales talk about a moon made of cheese, in Japan there’s a folktale about rabbits pounding mochi on the moon. Fans of the popular Japanese animation series, Sailor Moon, might be familiar with the folktale since Sailor Moon’s Japanese name, Usagi Tsukino translates to ‘rabbit of the moon’.

Another legend, perhaps Japan’s most well known, also features a particular kind of mochi. The story of Momotaro revolves around a miracle boy found inside of a giant peach. Young Momotaro is adopted by a childless couple and eventually sets out to vanquish a group of demons who caused trouble in the region. On his journey the boy befriends a talking dog, monkey and a pheasant by giving them some of his mochi rations. This type of mochi, called kibidango, is still made by only a couple of manufacturers today, one of which is located on the northern island of Hokkaido.

Mochi maker Tengudou started out by producing castella sponge cake in Hokkaido’s Hakodate in 1953. In 1973 they added mochi to their repertoire and they continue to explore new flavors to this day. By experimenting with adding both sweet ingredients such as chocolate, or savory ones such as soybean flour or kelp to their mochi, they continue to innovate.

Tengudou are also one of only two companies in Japan left producing kibidango, with their original flavor a bestseller. Though it carries the same name and shares the mochi base Tengudou’s Kibidango follows a different recipe that earned it bestseller status over the years.

There’s no shortage of flavors in Tengudou’s mochi lineup and they are extremely particular about only using local ingredients. Hokkaido grown apples, Hokkaido brewed sake, Hokkaido farmed kelp and even Hokkaido brewed coffee are just some of their available flavors.

Tengudou’s dedication to a particular style of mochi impressed us, and paired with their highly regional focus and long history led to us reaching out to them. We’re proud to have been able to bring our customers several of their mochi, offering uniquely rich mochi that pairs well with our tea.

We exclusively work with local, history-rich businesses in Japan, to help support regional communities and precious traditions. Have you tried mochi or other wagashi yet? If not, would you like to try? Let us know in the comments below.