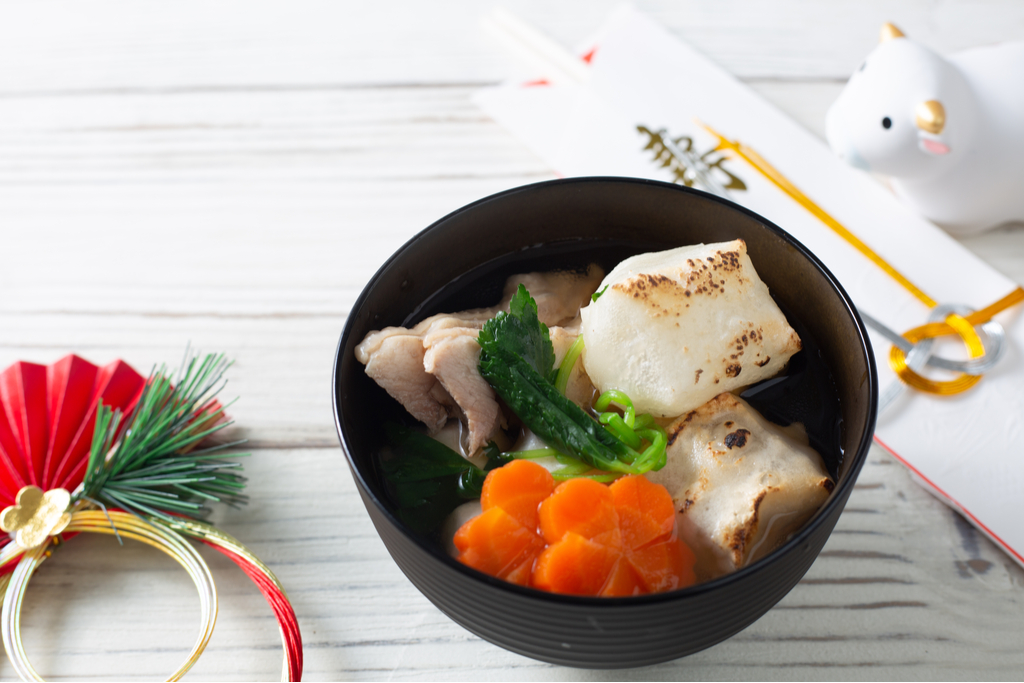 Compared to New Year’s celebrations in North America and Europe, Japanese people typically spend the holiday at home with their families. In many ways, Japanese New Year’s holds the same level of importance as Christmas.

At the start of the year, cooking is kept to a minimum and most of the food enjoyed over the holiday is prepared in advance so that by the time January 1st rolls around, everyone can relax. One exception to this is ozoni, a delicious chicken, vegetable, and mochi soup that is simple and quick to make. Traditional Japanese houses can get pretty darn cold in the winter, so a piping hot soup is just the ticket to keep everyone warm and happy.

Discover how Japan’s history shapes its traditional sweets and snacks with a Sakuraco box – a Japanese teatime experience sent straight to your door.

Nowadays, starting in November and December, supermarkets ramp up their mochi sections and all of the ingredients for the ultimate ozoni soup are on display. But don’t wait too late, the last week of December the shops often run out of stock or even close down for the holidays.

While each Japanese family has their own recipe for this holiday soup, there are a few basic ingredients that ozoni always contains: a rich broth, grilled mochi, chicken, and some form of vegetables. The mochi is a traditional food eaten at New Year’s which symbolizes wealth and good fortune. The chicken and veggies are a bit more tricky, but basically, the traditional Japanese words for “chicken and greens” sound similar to “honor and recognition”. And Japan just can’t resist some good wordplay.

But there are no strict rules for what can and can’t be added, so different regions and families have created their own versions by adding ingredients. Some popular additions include:

Did You Know?
A healthy and balanced meal in traditional Japanese cuisine must contain 5 colors or goshiki. They are red, yellow, blue (green), white, and black.

In Kansai, there are of course variations, but generally ozoni is made with white miso paste as a base for the stock, lots of root vegetables (daikon, carrots, taro), and the mochi used is round (maru mochi). Maru mochi resembles the moon, which symbolizes good luck. This version most likely came from Kyoto, the ancient capital of Japan, and spread out to the rest of the region from there.

In Kanto, ozoni has a soy sauce based stock, rectangular mochi, kamaboko fishcakes, mitsuba, chicken, and carrots. Tokyo became the capital of Japan during the Edo period and had a strong samurai presence. The soy sauce broth actually stems from an old samurai saying, “miso wo tsukeru” which means “to add miso to something” and implied the feature of a samurai and the loss of their reputation. It might be a bit dramatic to link adding miso to a soup broth to someone’s ruin, but it did lead to this delicious version of ozoni.

The rectangular mochi used originally became popular due to the rise of mochi consumption that coincided with the Edo era population increase. Rolling and shaping the dough took too much time and shops could not keep up with the demand, so they began cutting mochi into blocks in order to produce them at a faster pace.

Tochigi is located northeast of Tokyo, and considered by some to be the suburbs to the suburbs of the capital. In this region the stock for ozoni is made with bonito (dried skipjack tuna) and burdock, which is a favorite local root vegetable that adds an earthy tone to the flavor.

Saitama is just a quick skip north of Tokyo. However, they have their own version of the soup which includes ginkgo seeds (ginnan). Ginkgo trees have a long lifespan so this adds yet another ingredient that symbolizes longevity, as well as fertility.

Gunma is most famous for their thatched-roofed cottages on the grassy slopes of the countryside. The ozoni in this region has chicken and soy sauce broth as well as the addition of tofu. There is even a special regional version of tofu called tsuto tofu which is wrapped in straw and gives off a beautiful earthy flavor and aroma once boiled.

Feeling inspired? Watch the video below to learn how to make Kanto (Tokyo) Style Ozoni

How Do You Eat Ozoni?

Soup in Japan is traditionally eaten with chopsticks and ozoni is no exception. Once the grilled mochi hits the broth, it becomes total ooey gooey goodness. Part of the fun is biting into part of the mochi and pulling the other half away as it stretches into a long string. It may not be considered the best table manners in some cultures, but the elastic texture is part of the celebration and signifies that you will live a long and healthy life.

With the rise of Instagram and other photo-sharing sites, people across Japan are now sharing their family versions of ozoni for all the world to see. It’s amazing that one simple soup dish can have so many different variations, and yet be such an integral part of the New Year’s holiday tradition.

Now that you’ve had the chance to learn about the history of ozoni and some of the regional varieties, which one would you like to try? Creamy miso broth in Kansai, or clear soy sauce broth in Kanto? Share your choice in the comments below!