Koyo Season: The Most Breathtaking Autumn 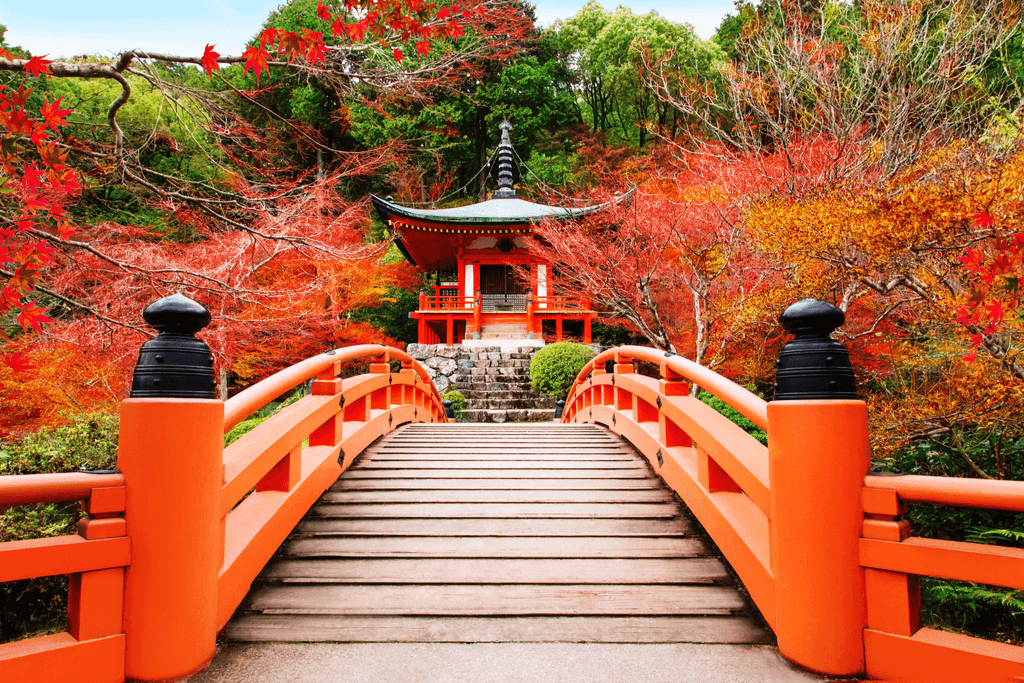 Koyo (紅葉) is Japanese for red leaves and denotes the autumn-viewing season. Many Japanese people visit parks and gardens during this time to admire the changing leaves.  They also enjoy many warm dishes with family and friends and travel as far as Aichi Prefecture to enjoy the heart of Japan.  Let’s look closely at what’s in store during autumn in Japan.

Momiji, the red maple tree, plays a significant role in Japan’s autumn foliage, especially during the koyo season.  These lovely trees are to the Japanese autumn as sakura (cherry blossoms) are to hanami (flower-viewing) in the spring.  Though the momiji tree is small and slow-growing, it can live for a hundred years or more, and they’re a popular choice for home decor.

Not only are momiji beautiful, but they are also heavily symbolic autumn leaves in Japan. They represent peace, beauty, and endurance, which is essential for the upcoming winter. It’s common to see them used in art and traditional clothing, especially kimonos.  Like most trees from early October to mid-November, momiji leaves turn red, brown, purple, and gold.

People in many parts of Japan use maple leaves in food as well. The most popular of these foods is momiji tempura or deep-fried maple leaves. It’s a 1300-year-old recipe from Mount Minoh (Osaka Prefecture) consisting of flour, sugar, sesame seeds, and vegetable oil. Its flavor profile is sweet and salty and pairs well with beer.

Because of its versatility,  the Japanese maple tree is ubiquitous in the autumn landscape.  It reminds us that even though winter is near, there is still so much opportunity to bask in its warmth.  The momiji is an excellent tree to set the scene for a beautiful autumn in Japan.

Even though it’s getting cold, plenty of flowers bloom in the autumn.  A lot of Japanese poetry over the years features autumn flowers.  Traditionally, these exalted flowers are known as the aki no nanakusa (The Seven Flowers to Autumn). Nevertheless, autumn Japanese flowers and plants are much different nowadays; many people recognize them for their beauty.

Chrysanthemums, red spider lilies, cosmos, kochia, and Japanese pampas grass are five popular flowers. Chrysanthemums are used as Buddhist offerings and in traditional medicine.  They are also prominent symbols in the Japanese government, especially with the imperial family.

Cosmos are the “cherry blossom” of the fall due to their perfectly uniform, bright pink petals. However, they also come in white and red and are often found in green meadows. Kochia is a flowering bush plant that turns bright red in the fall.  People initially used its branches to make brooms, but kochia is most enjoyed for aesthetic purposes today.

Lastly, the pampas grass is a popular plant that resembles rice and is a significant motif during the tsukimi season. It’s low maintenance but can be used as many times as necessary.  These beautiful autumn flowers remind us that even though the leaves fall, the flowers still bloom.

China originally introduced the concept of gardens to Japan during the Asuka period (6th to 7th century). During this time, open trade between the countries heavily influenced how Japan cultivated its natural environment. Like most aspects of Japanese culture, it expressed minimalism and simplicity.

Tokugawa Garden in Aichi, Nagoya, is the most famous of these gardens. It was initially a retirement residence for the Tokugawa clan in 1695 and boasted many features. Samurai teahouse, exquisite wooden bridges, and flowers such as peonies and irises are the most notable things in this garden.

Many Japanese gardens and public parks have “ginkgo tree avenues,” or icho namiki. The most well-known places to spot ginkgo trees are Hikarigaoka Park, Komazawa Olympic Park in Tokyo, Sobue City in Aichi, and even Tarumi City in subtropical Kagoshima.

Aichi Prefecture is the “heart of Japan”, located in the nation’s Chubu region. It has many attractions that perfectly encapsulate Japan’s traditional and technological aspects. In addition to the previously mentioned Tokugawa Garden, Aichi is also home to notable temples and museums.

Toyokawa Inari Temple, in particular, is quite famous and is one of Japan’s Big Three Inari Temples. Though a Buddhist monk was its founder, the temple is a blend of Buddhism and Shintoism.  It also features Reiko-zuka, a hill of stone fox statues with bright red bibs on them.

In addition, Aichi is home to the Toyota Automobile Museum.  Though Toyota was originally a textile factory, it is now a worldwide automobile conglomerate.  The museum highlights the story of Toyota and Japan’s automobile culture in general.

While enjoying the autumn view during koyo season, many people want traditional Japanese foods such as ramen, shabu-shabu, and especially oden to keep them warm.  Many of these dishes are either hot pot dishes or savory stews and use a lot of meat and seasonal vegetables.

Because of their general preparation method, many of these hot pot dishes initially seem similar.  However, there is a lot of nuance in their choice of ingredients, broth, and especially how people eat them.

For example, while nabe and sukiyaki simultaneously simmer the food, shabu-shabu requires diners to simmer each piece of food individually. Other hot Japanese dishes to enjoy in the cold weather include nikuman (steamed meat buns), yakiimo, and especially nikujaga (meat and potato stew).

After a warm and savory traditional Japanese meal, some people have karinto as a treat. Karinto is a wagashi (Japanese confectionery) made of deep-fried wheat and brown sugar. They are crunchy and pair well with green tea.

Even though most karinto uses brown sugar as its most common flavor, other flavors include ginger, burdock, and even wasabi. What’s more, karinto manju is a clever twist that combines this light snack with manju, a sweet, filled bun.  While most manju is soft, karinto manju is crispy and has anko (red bean paste inside). Some also feature a chestnut paste instead!

The koyo season is an underrated but beautiful time of year. There is so much nature to enjoy, from the scarlet maple to golden ginkgo trees. Despite the soon-to-be cold weather, Japanese gardens and meadows are still full of lovely flowers such as chrysanthemums and cosmos.

Traditional hot pot dishes such as nabe and sukiyaki feature edible chrysanthemum leaves, especially in nabe and sukiyaki.  Aichi is particularly famous for its kiritanpo nabe, as well as its shrines, castles, and automobile museums. It also has perilla-filled karinto, an exotic flavor for the beloved wagashi.

Have you ever experienced koyo in Japan before?  What do you like about it the most? Let us know in the comments below.