Karinto: The History and Culture of a Crunchy Delight 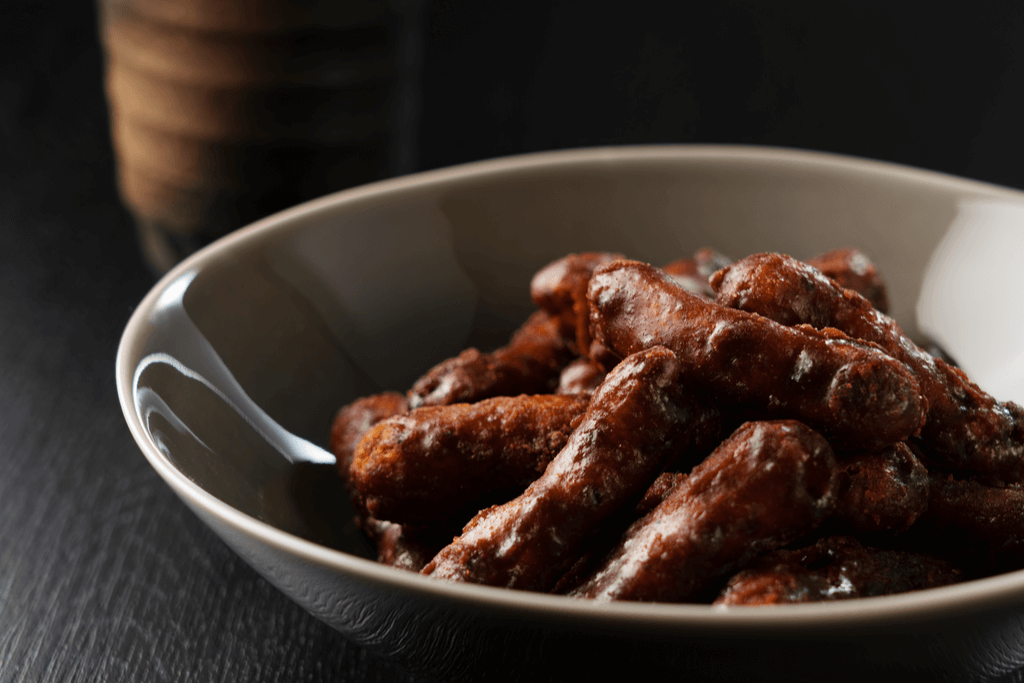 Karinto (かりんとう) is a traditional Japanese snack food that is made of fried dough. It’s a crunchy wagashi (Japanese confectionery) that people eat in both tea ceremonies and casual situations.  Though confectioners usually coat it in brown sugar, this underrated snack comes in many different flavors. Let’s take a closer look at why karinto is so delicious.

Karinto has a history of more than 2000 years. People generally estimate its origin to be around the Nara Period (710-794 AD). Though it was originally a snack for the elite but gradually became a confectionery for everyone.

Nowadays, you can easily spot this treat in any supermarket or at old Japanese cafes and ryokan (Japanese style inn). They are a perfect snack to serve with green tea or coffee.

It is a kind of Japanese snack made from a mixture of wheat flour, yeast, water, salt,  sugar. Afterwards, they are deep fried until crunchy. Then they are coated with white sugar or brown sugar, making it have a unique dark brown color.

It also has a cylindrical shape that is small enough to eat all in one bite. Thus, it is easy to eat this snack at any time of the day when you feel like it. Perhaps, its crunchy texture and savory sweetness is why it is loved by anyone regardless of age!

Want to taste all the best Japanese traditional snacks, including karinto? Check out Sakuraco! Sakuraco sends traditional Japanese tea, sweets and snacks, right to your door every month, so you can have a relaxing snack time at home!

Because karinto is a relatively unknown snack, it’ll serve as a great souvenir for your loved ones. For example Nihonbashi Nishiki Horin  (日本橋錦豊琳) is one of the most popular shops that sells it

In fact, it’s just one of many shops where you can try many different karinto flavors. Other popular locations to try karinto include the legendary Tokyo Station, and Tokyo Skytree’s Solamachi area. Moreover, karinto manju are popular as well–they’re crunchy buns with anko paste inside.

What Are Some Popular Flavors?

The traditional karinto flavor is brown sugar but you can find many different flavors that range from sweet to savory. While some use typical flavors such as burdock and ginger, others use more bold flavors such as wasabi.

Kinpira-gobo (きんびらごぼう) is a type of burdock root that is finely chopped and roasted in oil seasoned with soy sauce. Burdock appears in Japanese dishes so it’s no doubt that this flavor is the most popular among Japanese people. If you have never tasted burdock before, this is a good opportunity to give it a try.

As the name refers to, the sour taste of yuzu mixed with a little spicy of black pepper made this a fun option to try out! Yuzu kosho karinto is a combination of umami rich flavorful citrus chili paste so if you don’t like it to be too sweet, this flavor is definitely for you!

If you love sweet potatoes, this is a must try flavor especially during the fall season. Using the natural sweetness from Japanese purple sweet potatoes and a light layer of sugar, this flavor is perfect for those looking for something a little sweeter.

After opening the package, the aroma of ginger powder will immediately spread to your nose! Then a slight spicy taste of ginger will transfer to your tongue when you take a bite of this karinto. Although not as popular as other kinds of sweet karinto, ginger is also worth trying.

As you can see, karinto not only makes a delicious snack to add to your tea time, but it’s also an underrated souvenir that’s sure to wow anyone who receives it. Not to mention, its texture inspires other traditional treats such as karinto manju, and it’s available pretty much anywhere in Japan.