Tsukimi Festivals of the Past: A Short History 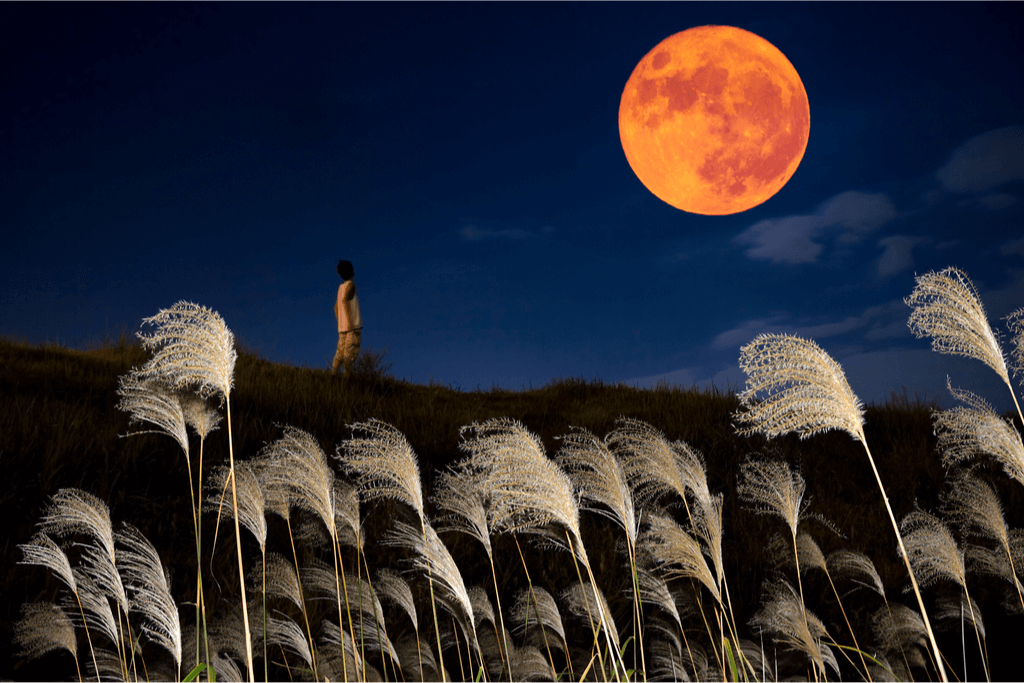 Like the cherry blossom viewing festivals (hanami), Tsukimi festivals (moon-viewing festival) are considered one of the oldest festivals in Japan with a history of more than 1000 years. Maybe not as exciting or bustling as hanami, the Tsukimi moon festival is usually more formal and traditional with just a few seasonal snacks and the moon as its main focus.

Let’s head back to the old days to briefly learn about this celebration’s origin and how Japanese people celebrate this festival!

The Origin of Tsukimi Festival

Many records suggest the activity of enjoying the moon in Japan was originally handed down to Japan through delegates and representatives from the Tang Dynasty during the Heian period (794-1185). Originally, Otsukimi was only for royalty and aristocracy. At that time, on every occasion of the full moon night in August, they often held lavish parties while reciting poems, performing operas on boats, and enjoying wine. However, by the Edo period (1603-1868) it was widely popularized to the public as a folk festival.

The full moon in the 8th lunar month is also the beginning of the harvest. For that reason, this day is also considered a happy day for Japanese farmers. According to Japanese culture, this is an opportunity for farmers to express gratitude to the gods for giving them a bountiful harvest and pray for their next crop. The tradition of holding these Tsukimi moon-watching festivals is still maintained these days in many agricultural households.

Similar to the Mid-Autumn Festival in China, you will see a lot of rabbits on different items associated with the Tsukimi festival. Japanese people believe that rabbits were one of the first inhabitants of the moon. It is said that if you look closely at the moon, you will see an image of a rabbit doing mochi pounding mochi (Japanese rice cake – a famous cake in Japan) with a wooden mallet and mortar. This process is known as mochitsuki.

Want to have a special at-home moon-viewing night with your friends and family? Let Sakurco help you out! Sakuraco delivers traditional Japanese snacks, sweets, tableware, teas, and more from local Japanese makers right to your door, so you can enjoy an authentic moon-viewing party right at your home!

In addition to the 15th of the 8th lunar month, Otsukimi is also held for the second time about a month later – the 13th day of the 9th lunar month. Since the night of August 15 is given the special name “night 15” (Jugoya), this night of September 13 is called “night of the 13th” (Jusanya) or “after moon”.

How is the Tsukimi Festival Celebrated?

Moon-viewing festivals usually take place on the 15th of August in the lunar calendar, which is around the middle of September or the beginning of October in the solar calendar. This is an opportunity for everyone to enjoy the most beautiful moonlit night of the year.

Many temples and shrines across Japan celebrate the Tsukimi event with performances such as traditional dances and recitations from the Heian period. Some famous gardens even mimic the old festivals with a service providing moon-viewing in large yachts. Here, you can enjoy this shimmering, magical full moon over the water with your loved ones.

In most Japanese homes, Tsukimi would celebrate in a much more modest manner. People decorate spaces with objects like pampas grass (susuki), offerings like Tsukimi Dango (balls of mochi), and autumn fruits like chestnuts, grapes, and pears. They are usually arranged on a porch facing south, so that they can share meals with the Moon Gods.

Nowadays, many people celebrate Tsukimi at home by incorporating some of the rituals of the home ceremony. For example, they may make Tsukimi a fun evening by hosting a picnic in a large space, like in their home gardens, and enjoy special dishes like mochi dango, mochi, or seasonal fruits and drinks. If they can’t find the actual seasonal fruits and drinks, snacks with similar flavors, like Japanese Kit Kats are also popular.

The key here is to find an open space with little artificial light so that everyone can gather, have a good time, and enjoy the beauty of the full moon.

Does your country have any traditional event in autumn to enjoy the full moon? Let us know more about how you celebrate the autumn season in the comments below!