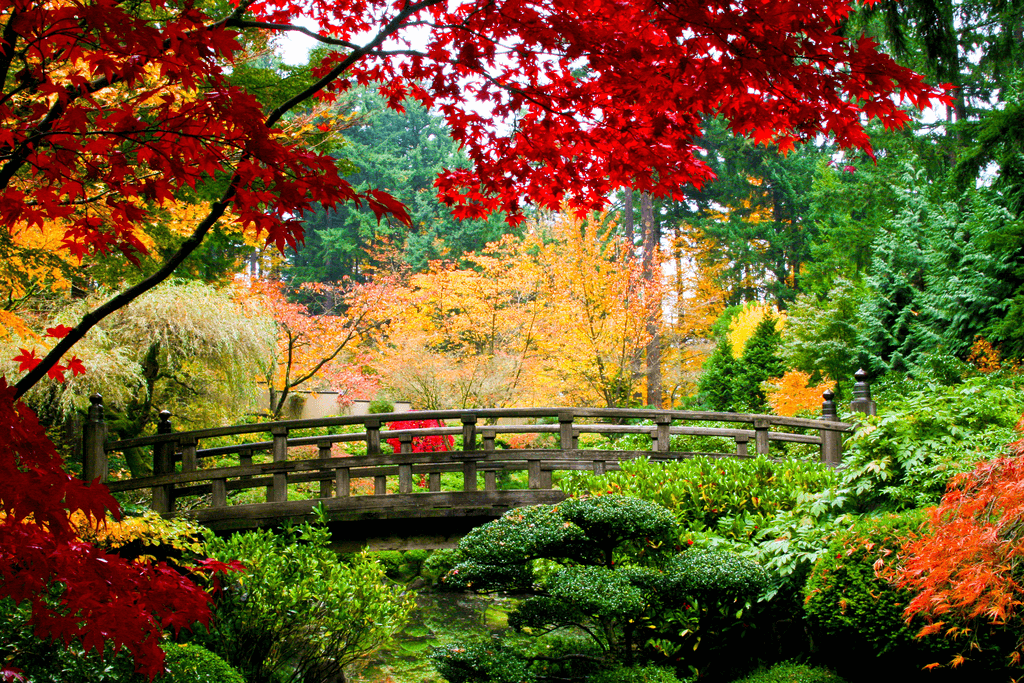 The emphasis on natural forms in Japan also impacted its gardens. Although China originally introduced gardens to Japan, it is now an essential part of Japanese culture.

During the Asuka period (6th to 7th century), when Japan adopted Chinese culture, the concept of Japanese gardens first spread. These novel concepts impacted and inspired Japanese traders, who returned to Japan with many elements of Chinese culture.

Japanese gardens have grown and changed throughout the ages, evolving with the times. The characteristics of each historical era are present in the many types of gardens. Unfortunately, the Sakoku (Policy of Isolation) during the Edo period impacted the growth of its garden culture.

The Tokugawa Garden is a Japanese garden in Nagoya, Central Japan. It was a retirement residence for the powerful clan in 1695. The still-large Ryusenko Lake is the strolling garden’s centerpiece. It is noted for its dramatic waterfalls, meticulous rock formations, delicate wooden bridges, and a samurai tea house. Not to mention, it also has a restaurant, and peonies and irises.

The Seikotei levee is reminiscent of the Sei (West) Lake in Hangzhou, China. It exhibits the Tokugawa family’s fascination with exotic and artistic styles from other countries. Unfortunately, multiple bombings during WWII destroyed most of the garden, and it didn’t open again until 2004.

Visitors can enter through the wooden Kuro-mon (Black Gate). It’s notable because it survived the American bombing during World War II and dates from 1900. There are several different plant species including peonies, irises, cherry trees, black pines, and maples (botan). The two-story Kansenro houses an auditorium, a shop, and a Japanese restaurant! This makes it a perfect place to spend the day indulging in Japanese culture!

Looking to experience Japanese culture and treats without leaving your home? Check out Sakuraco! Sakuraco delivers traditional Japanese snacks, teas, sweets, and snacks from local Japanese makers directly to your door so you can enjoy the latest treats directly from Japan!

Autumn is the most beautiful time to watch fall foliage because maple trees become bright red! Ginkgo trees also have golden leaves that are spectacular to behold in autumn. Autumn is when ginkgo trees become a brilliant shade of gold. After the leaves have fallen, the streets look like breathtaking golden carpets.

Here’s a list of the best viewing spots for you to experience stunning ginkgo trees!

Ginkgo trees are well-known for their beauty in Tokyo’s Meiji Shrine Outer Garden and Showa Kinen Park. However, Hikarigaoka Park in Nerima Ward also has a gorgeous row of ginkgo trees. It also features a large landscape because it was originally an airfield.

At the park’s southernmost edge, there is a 200-meter-long Fureai no Kei (meeting place) that runs from the end of Zelkova Field to the entrance of Hikarigaoka Station. It has 40 ginkgo trees on its borders. They are more than a century old, and some have trunks about two meters in circumference.

The branches are so broad that they resemble sky-covering tunnels. You’ll feel calm and renewed after taking a stroll down a street lined with trees. Here, the sunlight streams through the foliage, creating a contrast of lights and shadows.

This Setagaya park is home to a remarkable Kenzo Tange structure resembling a Jenga set more than anything else. It served as a secondary venue for the 1964 Tokyo Olympics. Even now, the venues host sporting events and flea markets. Since the park is emptier in the fall, its zelkova trees are as beautiful as the ones in Meiji Jingu Gaien. This gives you plenty of room to take the ideal photo for your Instagram.

Since the Edo era, Sobue City, Inazawa City, and Aichi Prefecture have become known for their ginkgo trees. With over 10,000 planted plants, including 200-year-old ginkgo trees, ginkgo fields may be seen all around the town.

Each of the four seasons allows you to view the maidenhair tree’s many tones, but autumn is the most stunning. There are ginkgo tree carpets and tunnels wherever you turn in this gold-colored village.

Don’t pass up the chance to view Higo-Hosokawa Garden’s stunning fall leaves illuminated at night! This event is between November 19th and the 27th. The garden’s dispersed Japanese maple, enoki, goby, and pine trees will each have 140 LED lights attached to them. On top of that, the walkway has hand-carved take-akari bamboo lights to add to the ambiance.

Japan is known to have amazing festivals, such as the Japanese fireworks festivals that attract thousands of people every year! The “Sobue Ginkgo Yellow Leaves Festival” is no exception, and it attracts many people for its stunning views! It takes place at Yusenji Temple and the nearby Yamazaki site every November. In Tarumi City, Kagoshima Prefecture, in 2022, more than 1,200 ginkgo trees will be planted on a plot of land the size of one Tokyo Dome, creating a world of golden hues in the autumn.

The owner and his wife spent more than 30 years planting trees in a derelict tangerine field to create this “golden paradise”. As a result, they won the first “Kagoshima Prefecture Landscape Grand Prize.”

The yellow ginkgo trees color-coordinate with the “Tarumizu 1,000 Ginkgo Festival”. Usually, the celebration takes place from the end of November to the beginning of December. It’s breathtaking to see the stone steps covered with yellowed leaves and unending rows of ginkgo trees.

Originally established in 1983, this park celebrates the 50th anniversary of Emperor Showa’s rule. Not only is it enormous,  (over 163.0 hectares wide), but it also boasts Japanese gardens and expansive open spaces. Not to mention, a stunning ginkgo-lined avenue! These trees turn into a gorgeous golden color in mid-to-late November. In addition to Ginkgoes, many other autumn leaves are here as well.

The row of ginkgo trees in Fukushima City, Fukushima Prefecture’s Azuma Sports Park is a recognized landmark. The best time to view the 116 ginkgo trees that line the park’s 520-meter central garden path is from late October to early November.

Each year, the trees also feature illuminations during their peak splendor. The bright yellow color contrasts beautifully with the blue sky during the day, throws a cozy orange shadow at dusk, and changes to a magnificent golden hue at night.

Yoyogi Park is situated in the center of Tokyo and is easily accessible from well-known tourist destinations such as Shibuya, Harajuku, and Shinjuku. One of Tokyo’s biggest parks, it has over 13,000 different types of trees, including ginkgoes.

The ginkgo leaves, are present in Japanese gardens and parks and are among the most beautiful aspects of autumn and nature.

Do you have a favorite ginkgo tree viewing spot? Let us know in the comments below!