Kagami Mochi: Ringing In the New Year with Mochi 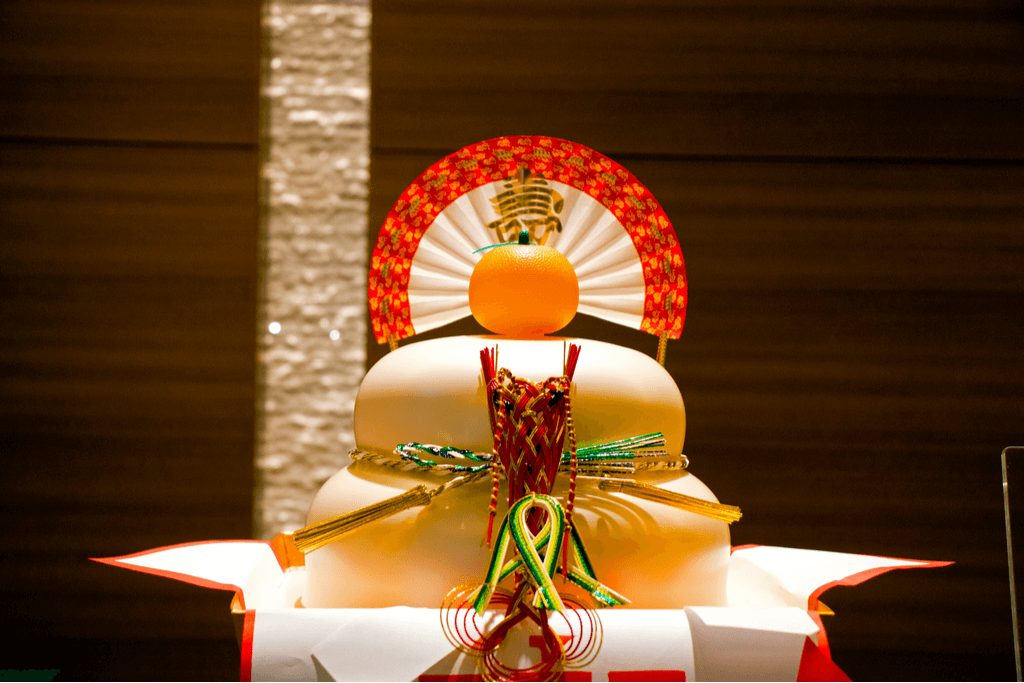 Ever seen a statue of a bitter orange and mochi cakes (Japanese rice cakes) stacked on top of one another? This is “kagami mochi“ – a traditional rice cake used for decoration on New Year’s Day in Japan. Surely, you must wonder about the origin, as well as the meaning, behind this special cake. Learn all you need to know about kagami mochi with us to understand this treat!

What is Kagami Mochi?

Kagami mochi is a Japanese traditional cake made up of two sticky rice cakes stacked on top of each other. This cake is offered to the gods on New Year’s Day to show respect and receive blessings from them. They pray for a peaceful, prosperous, and favorable New Year all at the same time.

Legend has it that this dish is where the God of Luck, Toshigami-sama, resides on New’s Year’s Day. In other words, this dish is truly above other New Year’s foods, even osechi ryori (Japanese New Year box meals).

The main ingredient used to make kagami mochi are Japanese glutinous rice (mochigome). Because of this, the cake is both delightfully sticky and has a richness when mixed with other ingredients. Making kagami mochi usually requires a lot of hand-crafting with high attention to detail. But the high quality and simple deliciousness of these rice cakes makes it all worthwhile on New Years.

Moreover, this type of mochi does not use any flavorings, colorings, or preservatives. Thus, anyone can enjoy the consistently delicious taste of the rice cake.

Are you a lover of Japanese mochi? If yes, you’ll love what Sakuraco has for you. Sakuraco delivers traditional Japanese snacks, sweets, tableware, and more from local Japanese makers right to your door, so you can enjoy mochi and more all year around!

The Origin of Kagami Mochi

According to ancient documents, kagami mochi appeared during the Muromachi period (1336-1573). In Japanese, Kagami means mirror. This mochi cake has the same shape as the ancient and legendary Yata no Kagami round bronze mirror, which is one of the three sacred treasures of Japan.

On the other hand–and according to ancient Japanese legend–mirrors were the sanctuary of gods. Therefore, the name “kagami mochi” was born and means to “worship the gods”.

This type of cake used to be placed in many parts of the house. However, today, people usually place it in only one location for honoring the gods during the main New Year’s holidays. Some families also place the cake in a small corner to serve as a decoration for the family.

Japanese people also pay great attention to the decorations. They often use other decorations to accompany the kagami mochi cake, which are:

Daidai tangerines: These are used to pray for your children and grandchildren’s eternal prosperity. This is because, in Japanese, the pronunciation of the word ‘eternal’ is the same as that of the tangerine’s name (daidai).

A wand with a lobe thread: This is a symbol of exorcism, helping to bring prosperity in business and success in work.

Red and white paper: This is for wishing for peace and banishing bad luck.

Fern leaves: These are to wish for longevity and a long happy life.

Kagami Mochi in the Life of the Japanese

Kagami mochi uses the image of two round stacked cakes to represent both the sun and moon or the old year and the new year. This is also a symbol of the family’s longevity from this generation to another. In addition, the round shape of this Japanese New Year food is also a symbol of affluence, fullness, and joy.

The time to prepare and enjoy the cake, called kagami biraki, is usually after the New Year holidays, betweet January 7th to January 11th. Depending on the region, there are also places that do it around January 15th to January 20th.

Kagami Biraki includes the custom of breaking kagami mochi and using it to make dishes such as ozoni soup (a soup with baked rice cakes) or shiruko (red bean soup). In addition to those ways of eating it, people also often fry the cake with oil, then sprinkle it with salt or soy sauce.

According to the Japanese concept, the purpose of eating kagami mochi cake is not only to wish for a good year, but those who eat the cake will be blessed with health and longevity by the gods.

How do people in your country celebrate New Year’s Days? Do you have a special dish like kagami mochi to enjoy during these days like the Japanese? Share with us your way of ringing the new year in the comment below!