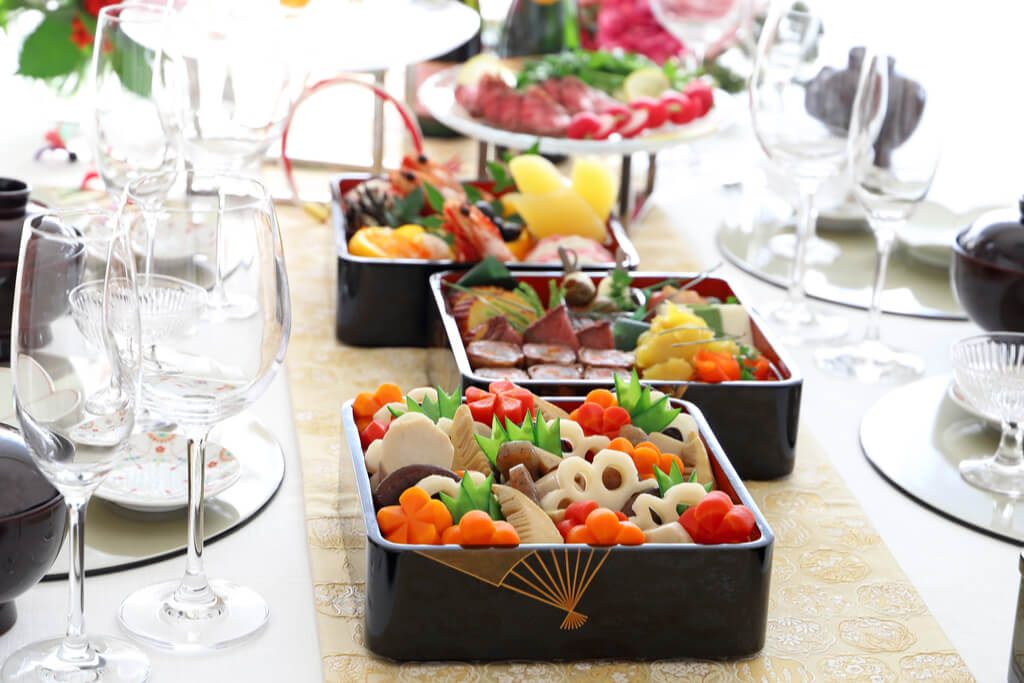 New Year is the most important holiday in Japan. The tradition of celebrating the New Year on January 1st started in 1873, but Japanese New Year food has been around for longer. Read more to learn about the most common foods to eat in Japan on New Year’s Day!

What is Japanese New Year Food?

The food eaten around New Year, or shogatsu (正月) in Japan, is unique, with a history lasting around 1000 years! The most famous Japanese New Year dish is osechi-ryori. It’s a fancy meal with a history dating back to the Heian Period (794-1185).

Want to ring in the New Year with some Japanese snacks of your own? Sakuraco sends locally-sourced, traditional Japanese sweets, snacks, and teas straight to your door for a taste of Japanese culture at home.

People typically eat it on December 31st to cross over into the following year. Because of this, many traditional Japanese soba restaurants will see their busiest day of the year on New Year’s Eve. Many restaurants offer particular types of soba, such as ‘kin (gold) soba’ with gold leaf on it!

The length of the soba noodle represents longevity or long life. Some families considered it rude or bad luck to leave noodles behind before the beginning of the new year.

Japan is a country of mochi, with hundreds of different variations. Mochi is a glutinous rice cake. Its shape comes from vigorously pounding down soaked rice until it becomes soft and stretchy.

People also eat kagami mochi, or mirror mochi, for the New Year. Come New Year’s in Japan; it is widespread to see kagami mochi available in shops, displayed on walls, and in the windows of many Japanese homes.

Kagami mochi comprises a sizeable circular mochi underneath a smaller mochi, which has a daidai or a bitter Japanese orange on top. This ornament-like mochi is on display until the first weekend in January. At that time, households will eat it together by breaking the mochi and putting it into ozoni soup, a Japanese soup made with mochi and often eaten on New Year’s.

There are many theories as to how and why kagami mochi started. One is that the ‘mirror’ symbolizes the mirror of the highest deity in Shinto, Amaterasu. According to legend, she is the bringer of the sun. Another theory is that the two mochi represent yin and yang, the heart and its strength for the coming year.

Osechi ryouri (お節料理) is the name for the traditional Japanese New Year food in special lacquer boxes. There are many theories about the origins of osechi, and a few are especially simple.

In the past, Generally speaking, the first three days of New Year are a time for rest.; Therefore, families should keep cooking to a minimum. This practice led to osechi ryouri, also called osechi. Osechi can be retained for a few days and eaten without preparation. When osechi first began, it was simple and made of only boiled foods, flavored with soy sauce and mirin.

Nowadays, there is a multitude of types of osechi! Since its humble beginnings, it grew popular as each region brought its take on it, and modern conveniences came into play. We’ve highlighted some of the most common osechi ingredients below.

Burdock root is a famous root vegetable in Japan and is eaten in various dishes all year round. It is very healthy, full of antioxidants, and contains that lovely umami (savoriness) too. Eating burdock root for New Year symbolizes stability and strength, as the burdock root grows firmly out of the ground.

This sweet potato mash is a striking color that contrasts beautifully with the red and black lacquer boxes. When combined with chestnuts, the side dish resembles gold coins. By eating kuri kinton around New Year, Japanese people believe they may be prosperous in money or have good luck for the coming year.

Eating kazunoko during New Year in Japan is said to symbolize children and grandchildren. In Japan, having children is still a sign of a successful life. Eating herring eggs is believed to bring prosperity and good fortune to the family and even more family members. The herring roe is golden yellow and marinated in soy sauce and dashi (Japanese soup stock).

The sweet black soybeans are instantly recognizable in any jyubako, with their distinctive shape and dark color. This is because black soybeans were traditionally cooked with iron so that the chemical in the beans would react with the metal and turn even blacker! These days, you can buy special colorants. According to legend, by eating sweet, slightly savory black soybeans, one will be healthy for the year ahead.

Let us know what your favorite osechi-ryouri is in the comments below! Have you tried any yourself or spotted anything while out and about?