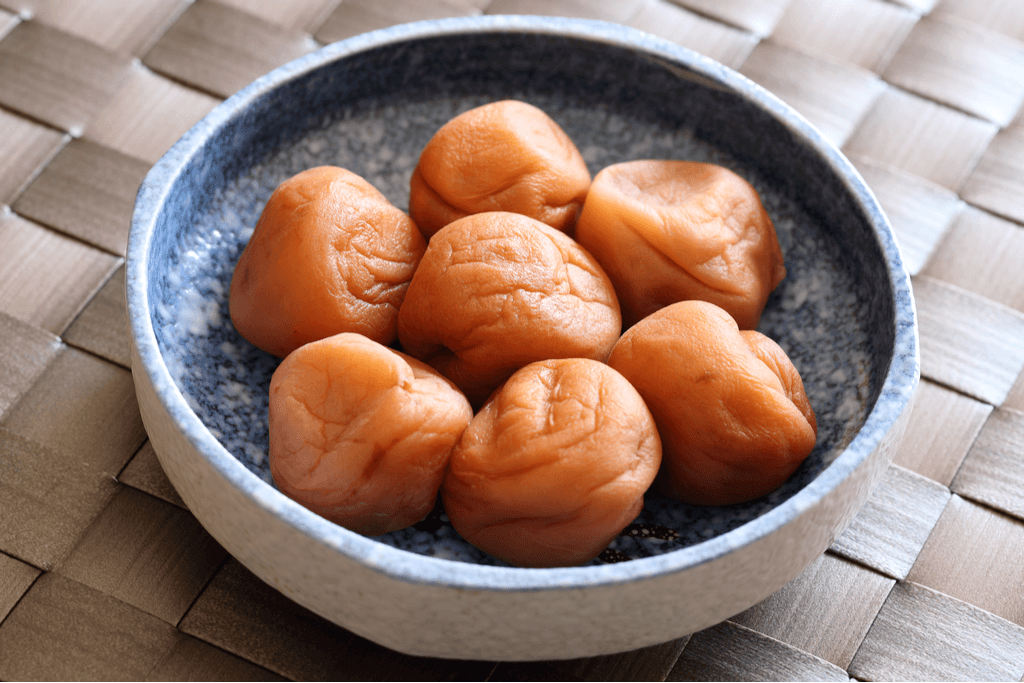 Spending any amount of time in Japan will see contact with ume fruit. Whether it is pickled or used in alcohol, its products are very popular, and the fruit is used in a variety of dishes and as flavoring. Come March time, ume blossom is the flowery overhead for many picnics in the park.

This article will tell you all you need to know about ume plums, from fresh to pickled.

One Fruit, Many Names

Ume is said to be similar to a plum, and came to Japan over 2000 years ago from China, becoming a Japanese staple. Thus, ume are often referred to as ‘plums’ or ‘Chinese Plum’, but more commonly ‘Japanese Plum.’

That said, this fruit is actually closer to an apricot! The ume tree, the ‘prunus mume’ is more closely related to an apricot plant than a plum tree, despite this common misconception. With that in mind, many people know this fruit as a ‘Japanese apricot.’ It’s also one of the most well-known fruits from Yamanashi prefecture.

Looking for ume-flavored snacks of your own? Check out Sakuraco! Sakuraco sends plenty of traditional Japanese snacks, sweets, and teas from local makers right to your door so you can enjoy all the flavors of Japan from strawberry to ume!

Ume blossom is a pretty pink (or white depending on the variety) type of blossom – very similar to cherry blossom, actually. The main difference is the flowering time. Ume blossom, or ‘plum blossom’, comes into bloom around one month before cherry blossom. So the first hanami or picnics under the flowers of the year are actually often under plum blossom trees!

When the tree has bloomed and its flowers have fallen around March or April, it’s time to harvest some fresh ume fruit.

Ume fruits are used in many different foods partly because they are very healthy too.

The Japanese plum starts off as bright green but as it gets riper, it gets more sour, thanks to its high citric acid content. It is said to have many great health benefits, as it is high in polyphenols (as well as citric acid). Let’s take a look at some of these benefits.

Ume fruits are readily available in Japan, and as the taste is pretty strong, you only need a small amount to add a distinctive flavor. There are many different foods associated with ume.

The most common one is ‘umeboshi’ AKA ‘pickled plum’ or ‘dried pickled plum’, which is made by pickling the fruit in a salty mixture and then drying it out. When the plum is pickled in salt, it releases many of its natural juices to make a plum vinegar by-product. Plum vinegar is believed to have an abundance of health benefits of its own, thanks to the polyphenols released in the juice.

Umeboshi is also available in different flavors, such as red shiso (perilla leaf) flavor and honey flavor. Honey acts to balance the natural tanginess and added salt with a delicious sweetness.

Umeboshi is most commonly used as a topping for rice dishes, such as rice balls or ‘okayu’ (rice porridge). As this snack has a high salt content, they are also added to bentos as a preservative to stop the rice going bad. This is also why they were originally taken by samurai into battle.

Umeshu (Japanese plum alcohol) is another common product made with these plums. It means ‘ume alcohol’, and it really is just that. This plum alcohol is made by pickling or preserving the fruit over a period of around three months, in a mix of alcohol and sugar to create an alcoholic plum liqueur. This drink is available in most bars and even restaurants across Japan, with many making their own umeshu year-round.

You can enjoy this beverage on the rocks or mixed with water or fizzy water to create a sweet, refreshing alcoholic beverage.

Recently, there has been an Instagram trend of making ume cordial or ‘ume syrup.’ The syrup is made in basically the same way as umeshu, but instead of the alcohol, more sugar is added. The sugar that is used is a special type – Japanese Rock Sugar – which looks cool when layered in a big jar. It’s then left for around three weeks.

This syrup can be used on its own as a summery drink mixed with water, or added to a variety of dishes. Some people even use it in salad dressings for a sweet-and-sour lift.

Other types of ume dishes include jams and extracts.

Ume extract can be used to flavor desserts, such as ice cream and can even be found in Japanese Kit Kats! Ume Kit Kats are very popular, as are other ume-flavored Japanese convenience store foods, ranging from bubblegum to wakame seaweed.

If you haven’t tried ume yet then you are missing out. This sour fruit is not only delicious but also very good for you, and available as a flavor in so many varieties of snack that it’s nearly impossible not to find at least one variety that you like. Try it and see!