Discover Takoyaki: One of Japan’s Most Delicious Street Foods 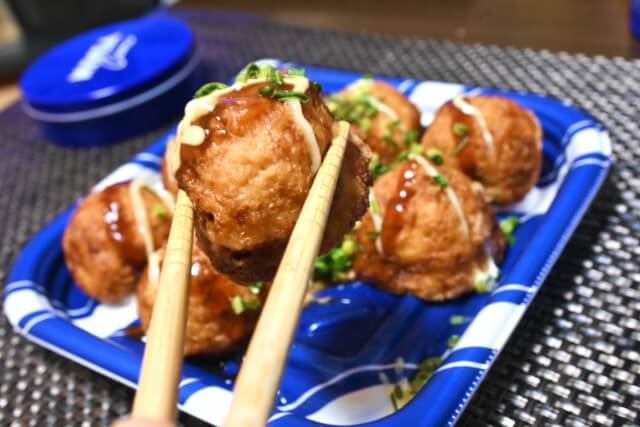 Say it with me, “Octopus balls.”

Not exactly your average Western tourists idea of a mouth watering treat.

Yet, when it comes to Japanese street food, the quintessentially Osaka-esque Takoyaki is just that – a mouth watering delight.

The word takoyaki is made up of the Japanese word たこ(tako) – meaning octopus, and the noun form of the verb 焼く(yaku), which means to fry or grill. The basic concept of takoyaki is a grilled ball-shaped snack made out of flour-batter and filled with pieces of octopus, beni shoga (pickled ginger), tempura flakes, and green onion. The balls are formed in a molded pan with circular indents in which the batter is poured and rotated to create perfect balls of crepe-like consistency, grilled to a golden brown hue. The balls are typically served piping hot and drenched in a special savory sauce, Japanese mayonnaise, and a sprinkling of dried bonito flakes – all piled into a boat-like paper tray for ease of eating on-the-go.

So what’s it like to bite into one of these bad boys? The English language strains to meet the descriptive challenge, but I will do my best. Takoyaki is almost always served uncomfortably hot, fresh off the griddle, and once you pierce the golden brown exterior with your teeth, an oozing lake of flour-based magma carries the gems of octopus, ginger, and onion into your mouth, requiring several cooling exhales before you finish off the entire ball with a warm and chewy satisfaction that is hard to match.

As with any Japanese street food, the toppings, method, and presentation of the snack vary wildly across the different regions of Japan and often become the subject of playful debate. The modern push to create new and interesting varieties has made this genre balloon into a relatively endless combination of styles and specialties such as adding cheese, hot sauce, bacon, avocado and more. The traditional takoyaki batter base of dashi stock, flour, egg, salt, and soy sauce is also regularly experimented with, as in the Tohoku regional practice of adding yamaimo (yam) shavings to the mixture to make the takoyaki fluffier.

The common squabbling over relatively mundane regional differences does not stop at the basics. For example, it is said that Kanto people fry their takoyaki with a more crunchy outside and a melty interior, while Kansai people grill the ball more evenly. Also, apparently Kansai people frequently eat Takoyaki at home as a main dish, although it is considered a street food, often eating a large quantity of it in order to become full (perhaps 6-10 balls at once), while Kanto people eat it almost strictly as a street food item.

Even the signature sauce becomes the subject of debate. Is it Takoyaki sauce? Is it Okonomiyaki sauce? What is the difference? The brown Worcestershire-like sauce with a sweet and savory flavor is essentially the same that is used for both Takoyaki and Okonomiyaki, but online aficionados swear that Takoyaki sauce is thicker and sweeter. If you ask me, the manufacturers are laughing all the way to the bank, but still, harmless debate about minute differences is a fun part of exploring the world of Japanese street food, and Takoyaki is no exception.

Craving a taste of Japan while you’re stuck at home? Discover a world of Japanese snacks with Sakuraco, delivered straight to your door from Japan.

Takoyaki originates from the rough-around-the-edges city of Osaka, an ancient port town that spent periods as the official capital and served as a hub for industrialization and even organized crime. Osaka is blue collar Japan, and so is takoyaki. Perhaps I am biased, as my first experiences in Japan were in the city of Osaka, but the culinary style of one of Japan’s largest metropolises tends to match the Western idea of umami more than it’s Tokyo relatives. In the past, the Kansai region was considered to have a more refined and subtle flavor index, while Kanto tended to go for the thick flavors that would seem to match the Western palatte, but this is an outdated notion since after World War II. The flavor of the takoyaki balls prove the point. Osaka is now considered the “kitchen of Japan” where intense flavor and volume rule.

The consumption of treats using the crepe-like batter starts in Japan in the 17th century with the import of French cuisine. By the early 20th century, street vendors selling cheap snacks from the batter exploded in number. In Osaka in 1935, Tomekichi Endo is said to have invented what we now call the takoyaki, supposedly inspired by a traveler from outside the region mentioning that octopus was commonly used together with crepe dishes in his town.

After World War II, the American introduction of Worcestershire sauce would forever be paired with takoyaki, although many today still eat it in its original sauce-free form. Amid the rapid economic recovery of post-war Japan, takoyaki surged in popularity with the working class. The circular molded pans were eventually mass manufactured for home use in the 1980s and the now infamous takoyaki party was born.

Today, among the cheese-filling and avocado experimentation, takoyaki remains a beloved item, especially within the ranks of late-night izakaya warriors chasing the ultimate beer or highball companion. One favorite menu item these days is the takoyaki Russian roulette, where a tray of takoyaki is served with one secretly containing nuclear amounts of togarashi powder or habanero sauce. Always a good time. Naturally however, the most common place to find takoyaki today is still at the fabled street vendor, either one that is a permanent establishment or a pop-up shop at a summer festival. The endearing image of the local takoyaki stand is a undeniably nostalgic snapshot of Japanese culture.

If the thought of octopus balls puts you off, you know what they say, don’t knock it ‘till you try it. But in all seriousness, I cannot recommend takoyaki enough to anyone interested in Japanese street food. They are warm and delicious and deserve your attention. So, next time you find yourself in Japan, be sure to give this classic treat a try.