Best of Yokohama: The Legendary Port City of Kanto 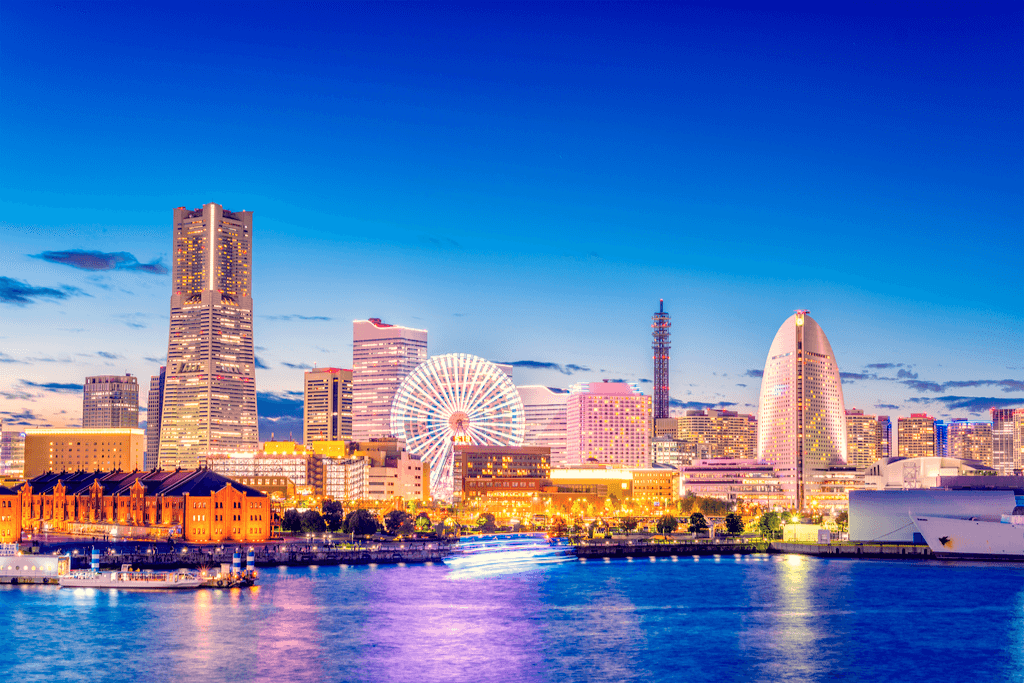 Yokohama is a port city in Kanagawa Prefecture, less than 25 minutes from Tokyo Station. It is the second largest city in Japan and rests on Tokyo Bay. Because of its rich history as an international port city, this bayside jewel has much to offer to locals and tourists in terms of entertainment, events, and food.

The city of foreign firsts and food with a worldly twist

Initially, Yokohama City was a small fishing village until 1853, when Commodore Matthew Perry, an American naval officer, arrived in the area with his historical “Black Ships.” Upon his arrival, his troops used military and diplomatic actions to end Japan’s isolation (Sakoku) policy.

Because Edo (present-day Tokyo) wanted a buffer between itself and these new, seemingly volatile relations, they chose Yokohama as their new port. With that came a significant influx of foreign trade and food. While wagashi (Japanese confectionery) still play a substantial role in Yokohama cuisine, many Western delicacies and luxuries became a part of their culture.

Ice cream was developed in Yokohama’s trendy Bashamichi neighborhood by Fusazo Machida, a local confectioner. Though the first batches of ice cream used eggs instead of cream, the custard-like dessert was still quite popular. However, once Machida included Hokkaido ice in his creations, ice cream became a famous luxury.

Other ethnic cuisine and drinks refined in Yokohama include beer, whiskey, and pasta. Additional fusion cuisine has gyuunabe (beef hot pot), seafood doria, and sanmamen (crispy topping ramen). Even though it isn’t Japan’s first port city, it’s the most influential. When it comes to most things Western in Eastern Japan, it always starts with Yokohama.

The largest Chinatown in Japan

In addition to Western traders, Yokohama attracted many Chinese immigrants; as a result, the port city is home to one of the largest Chinatowns or Chuukagai in Japan. It’s accessible via the Subway Minatomirai and JR Negishi Lines and has many shops, restaurants, and other attractions.

One of the most important landmarks in Yokohama’s Chinatown is the Kuan Ti Miao temple, originally built in 1871. It’s a small Buddhist temple with classic, vibrant Chinese architecture and a pleasant visitor staff.

Like many ethnic enclaves, Chinatown also has plenty of food for visitors. Typical fare includes steamed buns (bao), dumplings (gyoza), and mapo tofu, a dish featuring chopped tofu and spicy red sauce. Ramen is a mainstay in Japanese cuisine, but it originates in China.

In addition to fantastic food, Yokohama’s Chinatown also has plenty of events throughout the year.   The most significant event is the Lunar New Year Festival (also known as the Spring Festival), which begins in late January or early February. Yamashita Park is the site for these celebrations, which include dragon dances, live traditional Chinese music, and acrobats.

While the Lunar New Year festival is spectacular, it’s far from the only festival in Yokohama. Keeping in line with the international aspect, one of these festivals is Oktoberfest. Yokohama’s Oktoberfest features beer, pretzels, and sausage, like the German celebration of the same name.

There are also plenty of summer celebrations as well. The most notable ones are Yokohama Sparkling Twilight, a fireworks festival, and the Minato Mirai Bon Odori Dance Festival, during Japan’s Day of the Dead. Because these events are prevalent, it’s best to show up as early as possible for the best experience!

Finally, the Greenroom Festival begins in May at the legendary Red Brick Warehouse. The annual theme is “Save the Beach, Save the Ocean,” and focuses on protecting and maintaining Japan’s public beaches. In addition, to live music and film screenings, Greenroom has live yoga sessions!

Since Yokohama has so much history, it’s only natural that they have museums too! Five famous museums throughout the city focus on art, transportation, and food. A few have interactive exhibits to make hands-on learning even more accessible for visitors of all ages.

There are two ramen museums in Yokohama; Cup Noodles and Shin-Yokohama Ramen. While the former focuses on instant noodles, the latter focuses on traditional ramen. Both museums have restaurants where you can enjoy the iconic food dish. Cup Noodles, in particular, has a bazaar where you can try noodle dishes from all over the world!

Another location is the Yokohama Silk Museum; you can learn about silk cultivation and industry history here. It also features many clothing exhibits, workshops, and even a gift store with silk clothing, cocoons, and even silk almond chocolate! The silk museum is perfect for people curious about how this gorgeous fabric.

Finally, there is the Hara Model Railway Museum and the Yokohama Port Museum for transportation history. Both chronicle the city’s rich history with its ports and train systems; not only is Yokohama one of Japan’s first major port cities, but it’s also home to the nation’s first railway! Both museums feature a lot of models and displays.

Yokohama is the birthplace of jazz music in Japan. It began during the Taisho period (1912-1926) and became a part of daily Yokohama life after the end of World War II. Because jazz represented liberation to the locals weary from the war, the music became integral to the city’s nightlife.

Its decor also set the tone for most Yokohama jazz cafes: smooth wooden interiors, vast vinyl record collections, and warm, soft lighting. All these cafes are inviting and cozy and boast some of the entertainment in the city.

Yokohama is undoubtedly one of the most vibrant cities in Japan. With an extensive trade and cultural fusion history, this city has abundant food, entertainment, and festivals. What about Yokohama interests you the most? Let us know in the comments below.