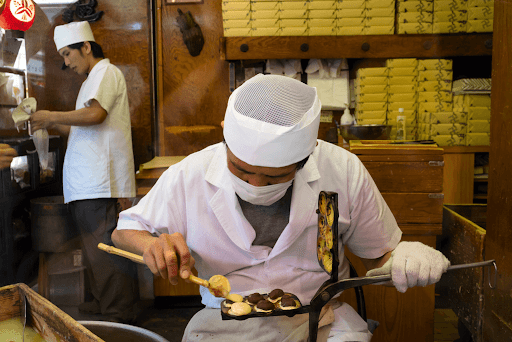 The list of unique Japanese crafts, including those of a culinary nature, is a rather long one. Even longer is the list of their makers, potentially turning a search into a lengthy endeavor. How about a little help?

At Sakuraco we do the footwork for our subscribers, building relationships with the makers of traditional Japanese sweets, snacks and home goods.

Through our curation efforts we have formed many relationships with experienced, history rich, and regional makers that continue to supply us. Read on for an introduction to some of them.

Mochi rice cakes have taken the world by storm, with the pleasantly chewy glutinous rice now encasing everything from ice cream to fruits. Mochi has been around as long as rice has been cultivated, meaning that besides its numerous modern fillings, there is also certainly no shortage of traditional sweet and savory varieties. While mochi is a simple sweet in principle, the ritual of communally making and eating it for specific Japanese holidays is integral to Japanese culture.

Hokkaido based maker Tengudou have been making both sweet and savory mochi the traditional way for decades, placing particular emphasis on using regional ingredients. Learn more about mochi and their products in our article Tengudou: Truly Traditional Mochi.

Japan might not be the first country that comes to mind when thinking about glassware, but ever since first coming in contact with European glass in the 16th century, Japanese artisans have been putting their spin on anything from glass sculptures to cups.

Ishizuka’s history began with a small workshop in Gifu Prefecture, where its founder honed his craft to perfection. With his reputation eventually earning him orders from the regional feudal lord himself, Iwasaburo Ishizuka was able to steadily expand his workshop. A few generations later the company moved to Nagoya, from where they would move on to supply the families of Japan’s postwar economic miracle. Read the full story in our article Ishizuka: Japanese Glassware Fit for Nobility.

Many of Japan’s traditional sweets first appeared in the Edo Period (1603 – 1867), and the humble monaka is no different. A pair of wafers sandwiching sweet anko red bean paste at its simplest, the refreshingly light treat comes in a surprising amount of varietes.

Eguchi have focused all their energy on making monaka since their founding in 1948. Unlike many other companies, they were never interested in branching out into other sweets, instead choosing to perfect one while using only local ingredients. That is not to say Eguchi have shied away from innovation, they frequently release monaka with new fillings, featuring anything from traditional Japanese ingredients to modern ones like coffee. Find out more in our article Eguchi Confectionery: New Flavors, Classic Shell.

Since chopsticks are rarely thought about as more than simple tools for eating, it might come as a surprise that there are still Japanese artisans who sometimes pour months of work into a single pair of them. At present, one small seaside Japanese town accounts for 80% of Japan’s lacquered chopstick production.

Founded in Fukui Prefecture in 1948, Tanaka Hashiten set out to continue the town of Obama’s long standing tradition of producing lacquered chopsticks called wakasa. Wakasa chopsticks can take anything from days to months to make, with the highest grade, the so-called jewelry coating taking the longest. Tanaka continue to produce one-of-a-kind chopsticks, but have also developed machinery to create lacquered pairs at more affordable prices. Read more about them in our article Tanaka Hashiten – Chopsticks & Tableware as Works of Art.

Japan is known for putting its own spin on things, and sweets with foreign roots are no different. Some sweets that found their way into the country centuries ago have become so ingrained into Japanese culture that they can reasonably be called traditional Japanese sweets by now. A sponge cake of Portuguese origin, castella is one of them.

Making confectionery since their founding in 1910, Sanseisha added castella to their lineup in 1951. Perfecting their recipe, they eventually stopped producing any other confectionery to instead focus on steadily expanding their production capacity. Read more about castella’s origin in our article Sanseisha: Japanese Cake Masters.

It’s hard to say for sure whether senbei rice crackers are Japan’s oldest traditional snack, but with a history going back to the 8th century, it’s not unlikely. Made by simply roasting rice and coating it with soy sauce, senbei are incredibly simple yet full of flavor. While this most simple kind of cracker is still around, a seemingly endless amount of other varieties means anyone can find something to their taste.

Entering the senbei business in 1947, Sanshu Seika have been working hard to bring their customers quality traditional as well as modern rice crackers. Read more about senbei and Sanshu’s history in our article Sanshu Seika – Crunchy Classic Senbei.

Sakuraco exclusively works with local, history-rich businesses in Japan, to help support regional communities and precious traditions. Through building relationships with these makers we are not only able to bring our customers authentic Japanese sweets, snacks and crafts, but also Sakuraco exclusive items developed in collaboration.

Have you encountered any of the crafts mentioned here? What did you think? If not, which one are you most interested in? Let us know in the comments below.