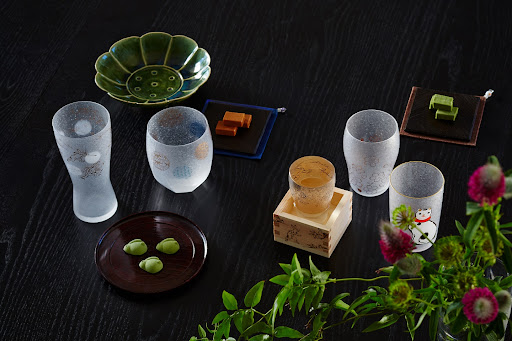 Japan’s history of making glass is still a comparatively young one, with the first Japanese glass artisans getting to work in the 17th century. Aichi prefecture’s glass experts Ishizuka started with small, one-off art pieces in the 19th century, before eventually supplying postwar Japan’s burgeoning Japanese middle-class with consumer glassware.

While simple glass beads were present in Japan as early as 400 AD, more elaborate glassware would not appear in the country until foreign traders brought it with them in the 16th century. The Portuguese were the first to establish trade with Japan around 1542, and alongside their Christian missionary efforts, brought items made from glass.

From glassware to mirrors and telescopes, these items were highly prized objects at first and mostly traded between the upper class. The novel material made an impression, and Japan continued to import and study it even after embarking on a policy of national isolation from 1639. Despite effectively banning foreigners from setting foot on Japanese soil, some limited trade continued with the Dutch.

The only accessible port for these Dutch traders was located on Japan’s southern island of Kyushu. With certain foreign goods allowed in the country but books initially banned, Japan’s first glass artists had to learn by imitation, trial and error. Applying a Japanese approach to a European glass style, it wouldn’t take long for distinct Japanese styles to emerge.

Glass would remain a luxury item for some time, but slowly spread to the rest of the country as wealthy feudal lords grew interested in it. Small glass workshops started springing up, and regionally different styles developed.

Ishizuka Glass’ story begins with founder Iwasaburo Ishizuka in 1819. Kyushu was still the heart of glass production in Japan, and Iwasaburo would first travel to Nagasaki to study the art of making glass. Upon returning, he set up  a small workshop in Japan’s mountainous Gifu Prefecture, quickly making a name for himself as a pioneer in the region.

Iwasaburo eventually received an order for glass work directly from the feudal lord of his domain, cementing the workshop’s reputation and allowing it to grow. A few generations later, in 1888, the workshop moved to nearby Nagoya, Japan’s capital of manufacturing. Here Ishizuka was the first company in Japan to succeed in melting clear glass in a kiln suitable for mass production.

Quality Glass for the Masses

Japan was left in ruins after World War II, but its economy recovered at remarkable speed. By the 1950s the ‘economic miracle’ had allowed industry to reemerge and manufacturers eagerly got to work. As part of this new economy, a noticeably more modern middle class emerged with an appetite for consumer goods.

Ishizuka rose to the task, and through applying their Japanese craftsmanship to western style glassware, created a colorful tableware series that would soon be found in homes across the country. Called Aderia, the series featuring whimsical designs of flowers, fruit, and animals were so popular in fact, that Ishizuka Glass have recently reissued their designs from the 1960s and 1970s to overwhelming success.

After supplying households nationwide with both printed and clear glassware, Ishizuka continued to develop new products in different styles. Western style beer glasses with Japanese graphics can be found side-by-side with unique Japanese designs, offering something for every taste.

Their long history of quality, tradition, and unique Japanese expertise is why we reached out to collaborate with Ishizuka. Sakuraco is proud to have collaborated with Ishizuka Glass for a one-off exclusive cherry blossom sake cup in March 2022. Featuring cherry blossoms in bloom, the cup was inspired by and designed for enjoying a drink in the Japanese ritual of hanami, or flower viewing.

We are proud to be able to regularly partner up with companies like Ishizuka Glass to bring our Sakuraco subscribers high quality Japanese home goods. We exclusively work with local, history-rich businesses in Japan, to help support regional communities and precious traditions.