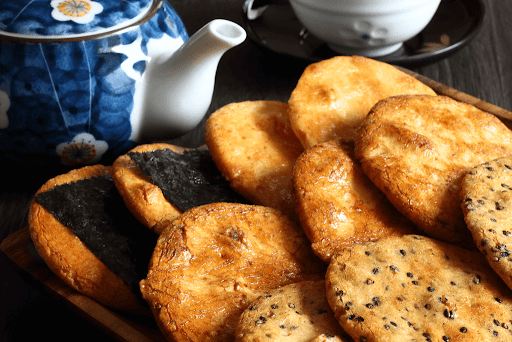 One of Japan’s oldest snacks, the quintessential senbei rice cracker remains a popular choice in Japan. With only rice flour as its base ingredient, flavor possibilities are almost endless, meaning there is the right senbei for any occasion. From a quick snack to artisanal statement, maker Sanshu Seika covers all bases.

The first recorded written appearance of the word senbei dates back to the 8th century, although it is safe to assume they have been around for centuries before. These early senbei however were made from grain, not rice.

Rice, although essential to Japanese food today, was a luxury for most of Japanese history. Besides nobility, the population subsisted mostly on grains like millet, until white rice became affordable to the masses in more recent times. While the ingredients for senbei changed, the basic idea behind it hasn’t. Senbei are small, portable, and unlike freshly cooked rice or grain keep much longer.

There are several origin stories for the modern, rice flour-based senbei, but the most popular one is set in present-day Saitama prefecture, the home of Sanshu Seika. A woman running a teahouse known as Osen was running it as usual and ended up with leftover dango, circular mochi rice cakes. By flattening them and grilling them over charcoal, she created a new kind of senbei that would become extremely popular and effectively replace the previous style.

The most basic senbei is soy sauce flavored, and sometimes named Soka senbei after the town of its likely inception. Usually round in shape, it’s given a coating of a simple soy sauce glaze and sometimes wrapped in a single sheet of nori seaweed. The slight saltiness from the soy sauce gives these senbei a surprising depth that makes them almost addictive.

From this basis, there is no limit. From sprinkling chopped seaweed or spices on top, to adding black beans, anything goes. While most varieties are savory, sweet ones like sugar sprinkled senbei also exist. Then there are variations in the process, such as deep-frying rather than grilling, and many many more. Meat can also be added to the dough, but seafood is more popular, in particular shrimp and squid.

While similar in appearance, arare, another crunchy traditional Japanese snack, is different from senbei. The rice ground to flour to make senbei is made with so called uruchi rice, the kind of rice eaten daily in Japan. Arare on the other hand is made with the same glutinous rice used to make mochi rice cakes. If you’re unsure, the shape is a dead giveaway: Senbei are almost always round and flattened, while arare comes in chunks or spherical shapes.

Founded 1947 in Tokyo, Sanshu Seika have been making senbei ever since. Relocating to Kawaguchi City in neighboring Saitama Prefecture several years later, they continuously added to their lineup of rice-based products.

1968 nearly marked the end of the road for the company, when disaster struck and their entire factory was destroyed by fire. Undeterred by this setback, all employees moved to a temporary site. While the variety of products had to be scaled back initially, it wasn’t long before Sanshu found their way back to their previous road of success, with sales and factory size steadily increasing.

1968 nearly marked the end of the road for the company, when disaster struck and their entire factory was destroyed by fire. Undeterred by this setback, all employees moved to a temporary site. While the variety of products had to be scaled back initially, it wasn’t long before Sanshu found their way back to their previous road of success, with sales and factory size steadily increasing.

Despite the company continuously growing and expanding, their lineup has remained straightforward, with a clear focus on senbei and related rice products. Sanshu’s dedication to one of Japan’s oldest snacks impressed us, and their success within a market of many senbei manufacturers is testimony to the quality of their crackers.

Sanshu Seika are particular about the purity and simplicity of their ingredients, traditional methods, and with working with local suppliers and operating stores for specialty sweets in their native prefecture. We are proud to be able to present our customers with a millennium old traditional Japanese snack, that is surprisingly full of flavor despite its simplicity.

We exclusively work with local, history-rich businesses in Japan, to help support regional communities and precious traditions. Have you tried senbei yet? If not, would you like to try? Let us know in the comments below.