What Is Soba? A Guide To Japanese Buckwheat Noodles 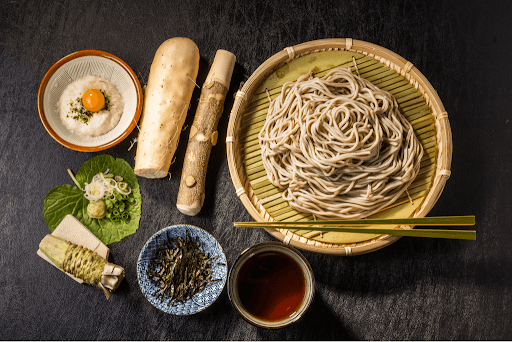 Noodles are a staple of Japanese cuisine, popular for their versatility just as much as the multitudes of textures they offer. While soba noodles often take a backseat compared to ramen and its regional varieties as a Japanese culinary export, they are hugely popular across Japan with many local variations and specialties.

The exact arrival of buckwheat in Japan is hard to establish, however there are records mentioning food made from its flour from the 8th century onwards. Initially it was not eaten in noodle form and instead as a kind of dumpling or cracker, until the city-dwellers of Edo, present-day Tokyo, discovered its versatility for a quick meal in the early 17th century.

While soba noodles initially became a hit as a kind of fast food for an accelerating pace of life in Edo, they quickly spread all over the country. Today it can be found anywhere in Japan, with endless regional varieties and specialties.

Ingredients and Ways to Serve

Originally, only buckwheat flour was used to make soba noodles, but many shops realized that adding some wheat flour makes the noodles less brittle. It is also worth noting that there are some Japanese noodle dishes containing the word ’soba’ which in fact do not contain any buckwheat at all, such as yakisoba or chukasoba. While these are wheat flour noodles, more often than not, the name by itself usually refers to buckwheat noodles.

They’re eaten year-round, sometimes to mark special occasions like Japanese New Years, but always in one of two ways: Hot, with the noodles submerged in broth, or cold, with the noodles drained after cooking and served separately to be dipped into a specific sauce. Let’s have a look at some dishes for each category:

Hot soba is popular year round and usually served with the noodles submerged in a broth called tsuyu. Tsuyu is made by combining dashi, a fish stock, with sweet soy sauce and mirin, a rice wine used for cooking.

The simplest way to have a hot bowl of soba. ‘Kake’ means ‘to pour over’ and that is exactly what happens. Hot broth is poured over the noodles, with usually just scallions added as a topping. Cheap, simple and available almost anywhere in Japan.

Sansai can literally be translated as ‘mountain vegetables’ and that is exactly what one can expect to find on top of this noodle dish. Edible plants that naturally grow in the wild such as bamboo shoots, bracken and ferns are used, with mushrooms frequently in the mix. Since the ingredients need to mostly be foraged this tends to be served as a spring dish.

Thin, slightly sweet sheets of fried tofu are found on top of the noodles for this dish, usually cut in characteristic triangle shape. They are often accompanied by slices of kamaboko, a steamed fishcake.

Cold Soba is most popular during the summer months, but available year round and especially appreciated by noodle enthusiasts. At the height of summer it is not uncommon to find some ice cubes in your bowl to further chill the noodles.

After cooking the noodles they are served on a bamboo tray, allowing excess water to drip down. The noodles are then dipped into a tsuyu broth, which is much stronger than the one used for hot soba. Chopped scallions and wasabi can also be added. After finishing the noodles it is common to mix the water used for cooking the noodles with any leftover tsuyu and then drinking it.

The simplest kind of chilled noodles, with hadaka literally meaning naked. Cooked, drained and then served cold with no toppings or sauce. Truly one for the enthusiasts out there.

A great example for the various recipes you can make, cha-style noodles involves adding matcha green tea powder to the buckwheat flour mix, adding a deep green color and green tea aromas. Similar to zaru-style with dipping sauce, this one is another summer specialty and somewhat rare treat.

These varieties are only the tip of the iceberg, with many, many more available all over Japan. Restaurants continue to look for new ways to make and serve these noodles and regional specialties are everywhere. We definitely recommend you to try out some soba on your next trip!